I was doing a search on Google for some good looking guys (who doesn’t do that from time to time?) and ran across George Eads from CSI. He’s a little too close to the “pretty boy” look for my taste, but nevertheless he is very attractive. Especially now that he’s grown a mustache.

Apparently fans of the show (especially those of the female persuasion) are fit to be tied because their little piece of cheesecake has fuzz on his face now. What a bunch of babies. The man looks great!

I once had a boyfriend who threw a fit whenever I grew my mustache. “It makes you look too old.” Who cares? You’re only as old as you feel and quite honestly, I felt better about myself when I had a mustache. So in that respect I was quite relieved when he dumped me. I grew the mustache and didn’t shave it off for a long, long time. When I did shave it off (just to change my look or whatever), I immediately grew it back. I felt naked without it. Years later when I lost a bunch of weight I thought I’d shave it off and go with the trendy “soul patch” under my lip. I didn’t feel trendy though, so I grew my beard.

I have noticed that there is more opposition to a mustache vs a beard. I don’t know why. Food is more apt to be stuck in a beard than in a mustache, so it’s not like there’s men running around with spaghetti hanging out of their mustache or anything. And it makes for such a soft landing spot when you’re planting a kiss.

I am looking forward to future pictures of George Eads with a big, bushy, fireman’s style mustache. I hope he’s an inspiration to men everywhere.

Next time your spouse, boyfriend, significant other, whatever decides to grow a mustache or beard, don’t close your mind to it, encourage him! It’s the way nature intended it to be and at the very least, you’ll save a mint by not buying Mach III blades. 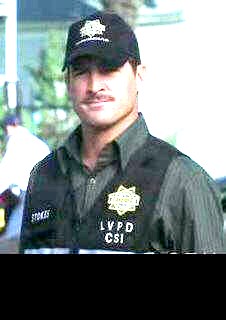