I recently added the last of the three Wonder Woman DVD box sets to our DVD collection, completing our collection of all things Wonder Woman. I am a huge Wonder Woman fan (especially the Lynda Carter TV series) and am one of the few people that actually taped the “Wonder Woman” movie from 1974 starring Cathy Lee Crosby as Wonder Woman when WTBS showed it in the mid 1980s. It’s painful to watch, but I still treasure that video tape to this day. I actually transferred it from a BetaMax tape to VHS in order to be able to keep on enjoying it! What gay man of my generation hasn’t spun himself around in the living room hoping to turn into some fabulous superhero, complete with flash, thunderclap and orchestral accompaniment.

While I am the rabid Wonder Woman fan, and a Xena worshipper as well, the superheroine I really dig is ISIS. 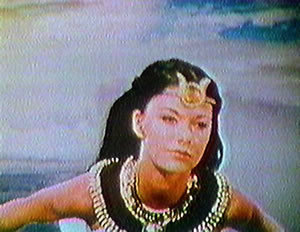 “Oh Zephyr Winds which blow on high, lift me now so I can fly!”

For those that are superhero impaired, a brief explanation is in order. In 1976, Saturday morning cartoons were accompanied by some live action shows. On ABC, you had “The Krofft Supershow” featuring Captain Kool and the Kongs and ElectraWoman (featuring Diedre Hall!) and DynaGirl. On CBS, it was the second season of “The Shazam / Isis Hour”. Shazam! featured the stories of young Billy Batson, roaming the streets and highways of southern California in a big white Winnebago with an older man named Mentor looking for those that needed help from falling rocks, stupid decisions, etc. Endowed with the powers of Soloman, Hercules, Atlas, Zeus, Achilles and Mercury, Billy would yell “Shazam!” and turn into Captain Marvel, played by an older and much more muscular man. It was kind of like Bill Bixby turning into Lou Ferrigno but without the green and nowhere near as menacing.

Anyways, after Shazam! came “The Secrets of Isis”, featuring Joanna Cameron as science teacher Andrea Thomas. Andrea was on an archeological dig in Egypt and came across an ancient amulet. After reading the scrolls enclosed, she found that she was a decscendent of the goddess Isis and was endowed with the ability to control the elements when she posessed that amulet. She would sneak off to a hidden place when someone was in trouble, pull out this amulet necklace and say “Oh Mighty Isis”. She then would be engulfed in smoke, a few ancient drawings would fly by, the glare of the sun and whoosh, there she was… Isis! Much like Wonder Woman’s Diana Price alter-ego, Andrea kept her hair in a ponytail and wore glasses. No one could tell that Andrea was actually Isis, including co-teacher Rick Mason or students Cindy Lee and Rennie Carroll.

Anyways, even though I lusted after Captain Marvel (especially the second one, John Davey, he was quite hot), I was absolutely mezmorized by Joanna Cameron as Isis. To this day I find that she has one of the most beautiful female voices I have ever heard in my life. It is so even, so calm, so soothing. Small wonder that she once held the Guinness Book of World Records for doing the most television commercials of any performer. And I always found her portrayal of Isis so endearing. Some student may have driven a car off a cliff after hitting a nail in the road or accidently shot a hole in a gas tank near a burning building with the gun he had borrowed from his father, but Isis just did her thing and brought the fool to safety. She usually was creative, using the rain to quench the flames of a menancing fire or the winds to bring a broken-down motor boat back to safety ahead of the typhoon. One of the cool things about Isis is that when she flew (like Captain Marvel or Superman did), her arms and hands were held behind and to her side, so ladylike, instead of in front her like the guys do. Kind of like the way Samantha always side-saddled the broomstick in Bewitched.

Here’s a couple of video clips from the show. They are in RealMedia format.
Andrea turning to Isis for the first time
Another clip of Andrea turning Into Isis
Isis Taking Flight