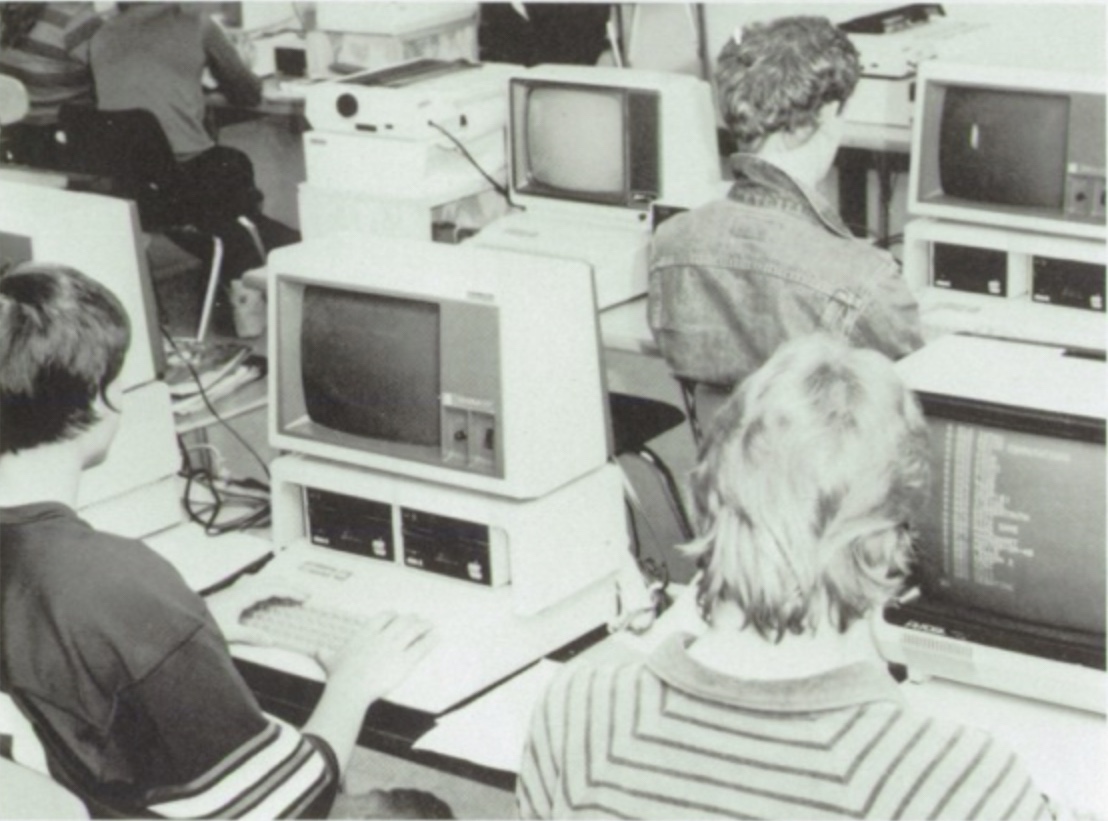 The first time I sat down in front of a computer for any length of time I was a freshman in high school. It was 1982 and through a local foundation, the school district had purchased a bunch of Apple ][+ computers. Adding to the four that were in the high school computer “lab”.

At the time the computer lab was a makeshift affair in what used to the office of the Math Department chair. Computer education fell to the math teachers; the business department was still using adding machines and IBM Selectric or Wheelwriter typewriters.

Oddly, it was my French teacher that first introduced computer use to her curriculum. She would later publish software that we would use to reinforce what we were learning in French I class. (“Michel, Anne, vous travaillez? Non, nous regardons la television, pourquoi?”). We’d fire up a program on a 5 1/4″ floppy and type “RUN VERBS”. The prompt would say “TO WORK” and we’d type “TRAVAILLE”. It was during my first run of this exercise that I escaped out of the program and looked at the code. I had already been reading computer magazines so I was not lost when I saw things like “10 HOME”, etc.

The computer lab was to be used by the few select students that were taking Computer I as an elective for Math, and by the French students. A couple of months into my freshman year they opened up the lab to free time. You could sign up for 30 minutes after school and spend some time getting to write your own program. The school provided one 5 1/4″ floppy disk that we could use to store our programs; I should another student how to use a hole punch to make it so we could use both sides of the 5 1/4″ floppy disk. The computer lab teachers’ assistant, Mrs. LaPlante, said we weren’t suppose to do that because it turns out she didn’t know one could do that.

I signed up for my 30 minutes the following week and spent my free time going through the magazines about writing BASIC and coming up with my game plan to write something for my first floppy disk. I remember I could barely sleep the night before because I was so excited to actually be using a computer doing what I wanted for the first time.

I ended up writing a rudimentary program to emulate a cash register. I even had it printing an invoice; as you entered an item code and the amount, it would print a new line on the invoice. That’s how cash registers worked in 1982. Because we had only two printers in the entire computer lab (which was now up to a dozen Apple ][+ computers), Mrs. LaPlante was confused when the printer in the corner of the room would print just one line at a time. It took her a few moments to figure out who was printing and she thought I was printing out my program as I typed it in and told me I was doing it wrong. When went over and looked to see what I was doing she was confused to see a retail invoice printing and wanted to know where I had gotten the program to do that.

I showed her what I had written. This was shortly before my 30 minutes was up; luckily I’ve always been a very fast typist and remember, I had already planned what I was going to do and I was basically retyping what I had typed on my typewriter at home.

Mrs. LaPlante was impressed enough to have the math department leader of computers (that wasn’t her official title), Mrs. Coniski, come over and look at what I had written and the output on the printout. The monetary amounts were even lined up and right-justified. I was calculating tax. Mrs. Coniski was impressed and told me I could sign up for more time and I should consider taking computer at the next opportunity.

I did just that. By the time I was able to get into Computer I the school had converted Room 201 to a computer lab with over three dozen Apple ][+ and Apple //e computers, with a printer at the end of each row. Mrs. LaPlante and Mrs. Coniski had both moved on to greener pastures, so we had a new young new teacher teaching computer and “Course IV” Math. I had a huge crush on him at the time. He marked down one of my programming endeavors in Computer I for using a “GOTO” statement too early in the program and to this day I occasionally think about his comment scrawled in red pen across the green bar tractor feed print out: “write the cleanest code possible”.

The business department was doing their own thing, teaching word processing on an IBM DisplayWriter, which I also used in typing class. I was in typing class just to pass time, I could already type. The IBM equipment did little to grab my interest but I loved the Apple ][ series of computers. They felt more personal to me.

At home I had a Commodore VIC-20 as a Christmas gift and I put that computer through its paces. I saved some money to buy a 16K expansion cartridge to beef up the 2K of memory available. I also bought the data cassette for the VIC-20. I liked that computer and I was very appreciative of the present but I always wanted an Apple ][ of some sort, it was just not possible with the family budget.

I never did get my hands on an Apple ][ of any sort to call my own. I look on ebay from time to time to see what they’re going for; I still tinker with the idea of buying one, though my husband’s first question is always, what would you do with it and where would you put it?