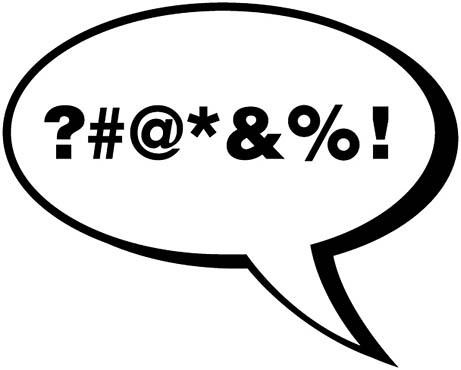 My father rarely cursed. My father was generally a man of few words, but when he did share verbal expressions of emotion he rarely swore. The closest things he would say that would come close to cursing was “Jumpin’ Mice” or “If it’s going to be a pain in the nuts…”, which the latter is probably more crass the cursing.

I followed his lead for the first two decades or so of my life and rarely swore. I can actually remember the first time I swore. It was 8th period gym class in 7th grade. I had dropped the watch from my grandfather’s estate between two lockers in the locker room and I was really bothered by it. When the teacher asked why I had put the watch in this precarious location I simply said to him, “I fucked up”. That was the first time I had swore to anyone other than myself and he instantly knew that I was really bothered by losing the watch left to me by my grandfather.

We successfully retrieved the watch.

It wasn’t until my radio days that I started a tendency of swearing like a sailor. It was the most effective way of communicating with the owners of the radio station because they were yelling and screaming most of the time. I can still remember my father’s wince when he asked why I wanted to leave that particular job and I replied, “because the owner is an asshole”. But the fact of the matter is, my language adapted to the situation because circumstances dictated that the only language they would take to heart was when someone yelled and swore at them. Then again I did witness the husband and wife team throwing a knife across the room during an argument, so swearing was probably the least of my problems at the time.

Michelle Obama famously said, “When they go low, we go high”. In a sane society, or at least in a society that doesn’t consider pajamas as an outfit to wear on an airliner, Ms. Obama’s declaration would be absolutely valid. But we live in a time and place where we are deeply, horribly divided. Truth, the validity of facts, and the elimination of a general moral compass has rapidly distorted our values. We are living in “the low”. To take the high road merely means to tell the truth now, and when bad actors no longer care about the truth, they’re sure not going to understand anything unless you lean hard on your intent, and that means dropping f-bombs to get people’s attention.

Look, I’m not a fan of talking like a sailor. I still have a microsecond of shock when David Rose drops a “fuck” on “Schitt’s Creek” or Patsy and Eddy drop all sorts of profanity of “Absolutely Fabulous”. But this is where society has taken us, and this is how our language is transforming to keep up with society.

A recent tweet passed by on my timeline criticizing the use of profanity on “The Circus” on Showtime. As host John Heilemann responded:

You've got to be fucking kidding. https://t.co/RiqG4OIco0

My response? A super condensed version of what I’ve written in this blog post.

But when it’s time to call the President of the United States a fucktard, I’m going to call him a fucktard.