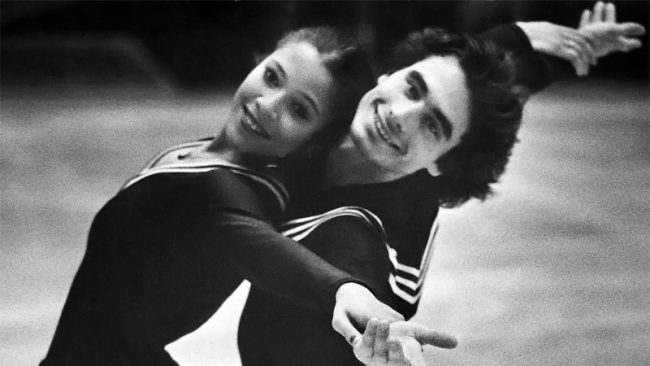 The family room in the house my dad built for us had a hardwood floor. The room wasn’t particularly big, but building a house and relocating from a 10’x50′ mobile home (with an 8’x35′ addition) into a two-story Colonial house left my parents with little resources for furnishing the new house. We had furniture, but there wasn’t a lot of it and much of it was second-hand. We had a lot of room to move in that family room.

When the 1980 Winter Olympics rolled around, they took place in Lake Placid, N.Y., about 175 miles from where we lived. My sister and I watched the Olympics on the small 17-inch Zenith color television that sat on the bookcases that flanked the fireplace, the centerpiece of the living room. After watching various skating events on the small Zenith on WIXT-TV 9 (ABC), my sister and I would put on our socks and “skate” around the hardwood floor. We were trying to be like Randy Gardner and Tai Babilonia. We’d put a now forgotten 45 on the record player and slide around, pretending it was ice. My mother would, um, speak loudly, as she cautioned us about banging into the wall, falling into the fireplace, or do something else that was equally ridiculous. Since the room was probably no larger than 12’x10′, there wasn’t much of an opportunity to get our speed up, until I discovered if I ran down the adjacent hallway and then slid, I could get a little bit of speed before banging into a lamp that hung from the ceiling in front of the fireplace. It was the beginning of my growth spurt so I had enough height to hit that horribly placed lamp. Occasionally I’d scare a cat. My mother would yell.

Ever since those Olympics and our “skating”, I think of Randy Gardner and Tai Babilonia whenever the latest round of the Winter Olympics are starting up. Earl and I sitting here as I type, watching the Opening Ceremonies.

Before the end of the night I’m going to run down our hallway and “skate” across the wood floor in our dining room.