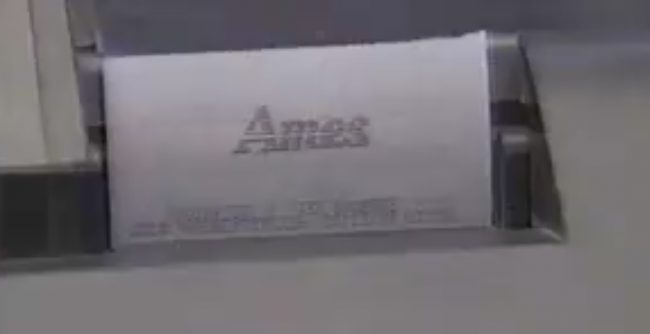 I’ve mentioned before that my interest in computers, and technology in general, was kicked into overdrive when our local Ames Department Store converted over to a computerized point-of-sale system in the early 1980s. Prior to that I was interested in anything that had a button. I wanted to know what that button did, how it did it, and more importantly why it did it. I was fascinated by anything connected or systematic: the telephone network, washing machine cycles and their predictability, how traffic signals worked. All of this was fascinating to me, and when Ames brought in and IBM 3680 Retail Store System to replace their mechanical (yet inventory tracking) cash registers, I was awestruck. Keen observation taught me how the old inventory numbers from the mechanical cash register price tags were modified to work with the computerized system. Since Ames was basically the only game in town, we went there often and I’d discreetly watch every keypress the cashier made. I could easily remember all the notes taped to the cash register, for example, I knew who wrote bad checks at any given time.

I was 14 or so when I went to Ames with older friends from the neighborhood. They walked around; I did the same and decided to buy a candy bar, a card for some occasion, and a Billboard magazine. None of these things had price stickers on them and this was before the days when scanning was mainstream outside of a handful of grocery stores in bigger cities, so all of the data was punched in by hand by the cashier.

In the spirit of speeding up their cashiers by forcing them to use “touch typing” for the numeric keypad, all the number keys were covered. Apparently cashiers were expected to know certain inventory numbers by memory. Notes taped to the cash register usually helped in this regard.

The customer in line in front of me was completing their sale when I noticed a change in the rhythm of the printer and the precise moment the cash drawer opened. Usually the drawer opened when the receipt finished printing and ejected for removal; in this instance the cash drawer opened immediately after the amount tendered was entered. This was a good thing, the cashier didn’t have to wait for the cash register to do its thing before making change for the customer. I deduced that the software must have been upgraded to be more efficient.

The cashier was a young woman named Kelly. She had graduated a few years ago and had been working at Ames since graduation. She’s was kind of snotty in high school. Her father drove our school bus and he picked up his daughters every morning. They were the last stop on the run before heading to the school. Kelly would take her sweet time coming to the bus, sometimes making us wait three or more minutes. Normally the driver would just move on, but he knew his daughter was going to school so he’d wait. She’d take her sweet time coming down the driveway. We’d all roll our eyes and make comments under our breath. We didn’t want to get hollered at by the driver for being disrespectful. She’d get on, glaring as she did so. Her hair was big with lots of Aqua Net.

Her hair hadn’t changed much since graduation. She wasn’t particularly happy in her job. A few years later, my friend Scott and I were hanging out in the break room (Scott worked the service desk at the time) and she was back there reading the National Enquirer. That was 1986 or so. She told us she thought the government should move all the “gays to Mars” so that they didn’t “infect the good people with the AIDS”. That was the same night Scott and I came out to each other.

Back to the checkout line.

“What?”, she asked, looking squarely at me.

She looked at me, aggravated yet quizzical at the same time.

She entered the number and the register didn’t complain. She then entered the price. 39 cents.

“How do you know that?”, she asked as she entered in the number.

I actually knew all of this information from the notes I had seen taped to the cash register and from careful study of the receipts any and everyone brought home from any store. Those receipts were my connection to this budding technology and I wanted to know everything I could about them.

“You’re a freak”, was her only comment as she laughed at me.

I turned red as I handed her the money. The drawer opened immediately as soon as she entered the amount tendered. It had never done that with me as a customer before.

My friends and I were in the ’69 Dodge truck my friend Ray owned headed back home when he asked, “how did you know those numbers”? He had watched the whole thing from end of the checkout stand as he waited for me to come through the line.

“I study these things because computers are the way of the future.” I was too embarrassed of being called a freak again to admit that I had collected dozens of these receipts, had figured out every nuance of the cash register system and had even drawn out flow charts of how they worked.

“You need a life”, was his only reply. He then turned up Van Halen on the cassette deck and we motored home.

I munched on my candy bar.