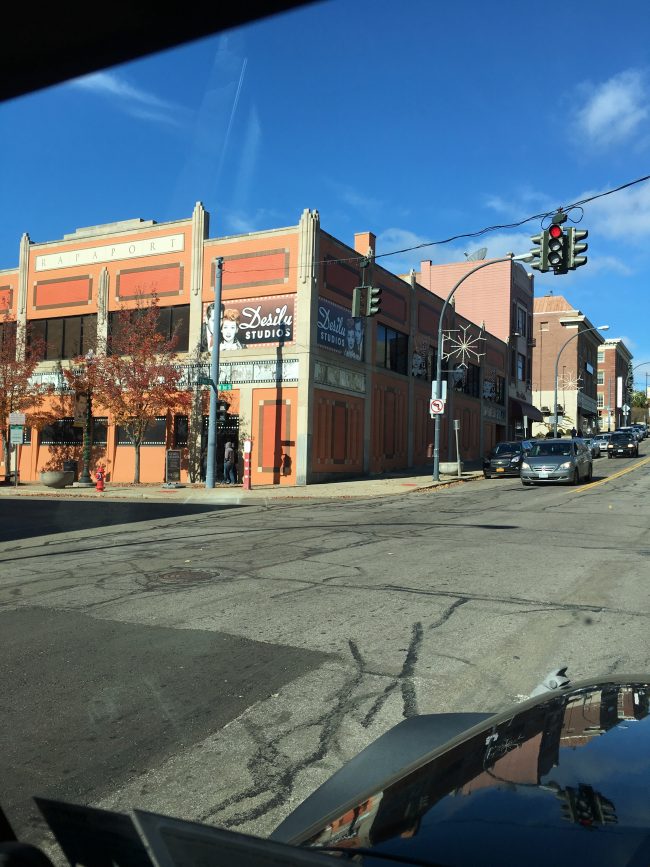 I lived in the small city of Jamestown from 1987 to 1988 and from 1990 to 1991. This little city sits near the southwestern corner of the state and is home to a couple of famous people, including Natalie Merchant and the group 10,000 Maniacs, but probably more famously, nearby Celoron is birthplace of Lucille Ball.

The city plays up its connection to Lucy in a big way, with many areas of the downtown area devoted to Lucy. This is a development since my days of living there; back in my day there was hardly any mention of Lucy in the area. A few bawdy stories from the natives, but that was about it. One of the bright spots of Jamestown is that, despite the downtown being situated on the side of a fairly steep hill, the downtown area is still quite walkable. Walkable cities are wonderful. More cities need to adopt this and move away from Urban Renewal blunders of the 60s and 70s.

I’ve passed through Jamestown on a couple of occasions over the years but yesterday I drove all over the place, looking at mobile homes I lived in near the Pennsylvania border, going by my old apartment high up on the hill by the airport and the like. The city seems to be in better condition than when I lived there in the late 80s and early 90s. Things seemed a little brighter.

Passing through there made me realize how much I’ve changed in nearly 30 years. I still knew my way around and I felt comfortable getting from point A to point B while driving the area, but I’ve done a lot of growing up since my Jamestown days and it feels great. I definitely have no desire to ever live there again but maybe I’ll pass through again in the future.

One of the interesting things about that part of New York State is that with it being 400 miles from what folks thinks of as “New York”, it has absolutely nothing in common with the Big Apple aside from the state designation of a postal address. Jamestown feels like a midwestern town. Many of the residential streets are still made of brick. The pace is slower. The accent is (thankfully) completely different. Natives say “pop”. I think because of its distance from the focus of New York State, many of the roads are in really rough shape. Driving on a nearby expressway in the Jeep at 55 MPH nearly knocked my Wrangler apart; I had to slow down to keep the Jeep on the road from all the patch pavement laid helter-skelter along the roadway.

Small wonder I saw a huge number of Trump/Pence signs and never saw one sign for Clinton/Kaine.

It’s not that Jamestown is rabidly anti-anything, at least based on my experience, but it’s more that Jamestown, much like the rest of rural America is looking for change.