I have mentioned before that my interest in computers and operating system and my general, overall geek-ness started with a fascination with cash registers, specifically the electronic point of sale systems from the 1970s. While the mechanical Sweda cash registers at the local Ames were “electronic” in the sense that they punched a tape that could be read by an IBM mainframe, the Sears in both Watertown and North Syracuse, like all the other Sears stores across the country, had one of the first electronic point of sale systems ever installed for a retailer.

I could vividly remember some details of the point of sale system used by Sears. The cash registers were made by Singer. The lettering on the cash register was in all lowercase letters, as was the tech-chic style back in the 1970s. The LED number display was large and just one line of numbers across the top of the cash register. Instead of instructional messages being spelled out or illuminated on the display, the appropriate buttons on the keyboard were lighted up with the various options at any point in a transaction. The drawer popped open when the cashier pressed total. Amount tendered entry and the associated change did not appear on the receipt, it was computed after the sale was completed. That’s one of the reasons that the cashier asked about cash/check/charge prior to ringing up the sale. This is back in the day when cashiers cared about these things. An optical “wand” was added in later years, giving the cashier the capability of reading a price tag with OCR lettering. The price was usually entered in separately.

There’s not a lot of detail about this Singer point of sale system online; over the weekend I filled in the gaps of my memory by reading old issues of “Computerworld” via Google Books. It was there that I discovered that the point of sale system was actually called the Singer Modular Data Transaction System, or Singer MDTS. Both the Singer and Friden Corporations had either merged or were working together on the project; some registers are marked Singer, some Friden and some Singer-Friden. The typical cash register in a Sears store had 2K of memory. That’s two kilobytes. To put that in perspective, it would take over 33 MILLION cash registers to provide the same amount of memory found in my iPhone 6s Plus.

As I was doing research on the Singer MDTS system, I came across an eBay auction for a press photo of one of the data terminal cash registers. Since I have a very small display of these old machines in the way of framed photos in the downstairs bathroom, I bought the photo and put it up today. 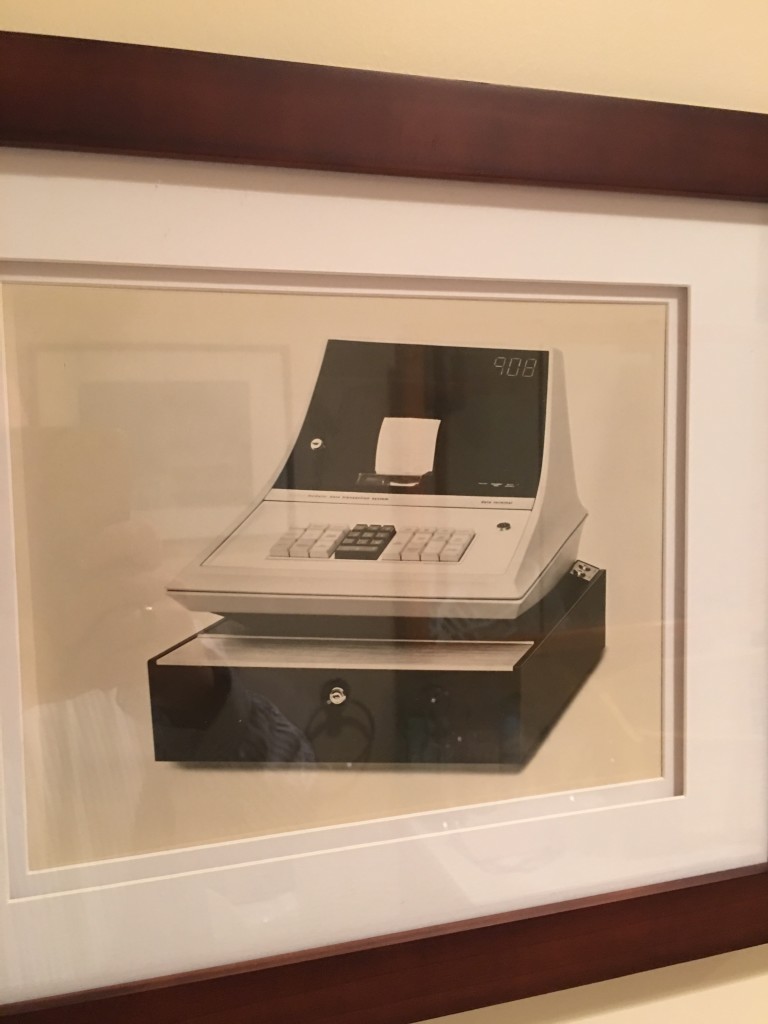 I can’t help but think that technology from this era is when technology was truly exciting. Developers had to cram a lot of software into a very small space. User expectations weren’t set yet. Technology people were blazing into unknown territory. Today’s technology, while exciting in what it can do, is predictable and quite frankly, rather boring. There’s nothing new that has really shaken up the world since the introduction of the smartphone in the mid ’00s. That’s one of the reasons for my never-ending interest in Linux (even though I primarily use Apple products) because Linux keeps me in an explorer mindset and helps my geek-ness grow.

I’d love to get my hands on one of these cash registers to see what makes it tick, but I have a hunch they’re all sitting in landfills scattered around the country. I passing through a smaller Sears store in the mid 1990s and they had one of these registers still running in the kiosk under the stairs where they copied keys. I guess it was doing what it had to do so they stuck with it.