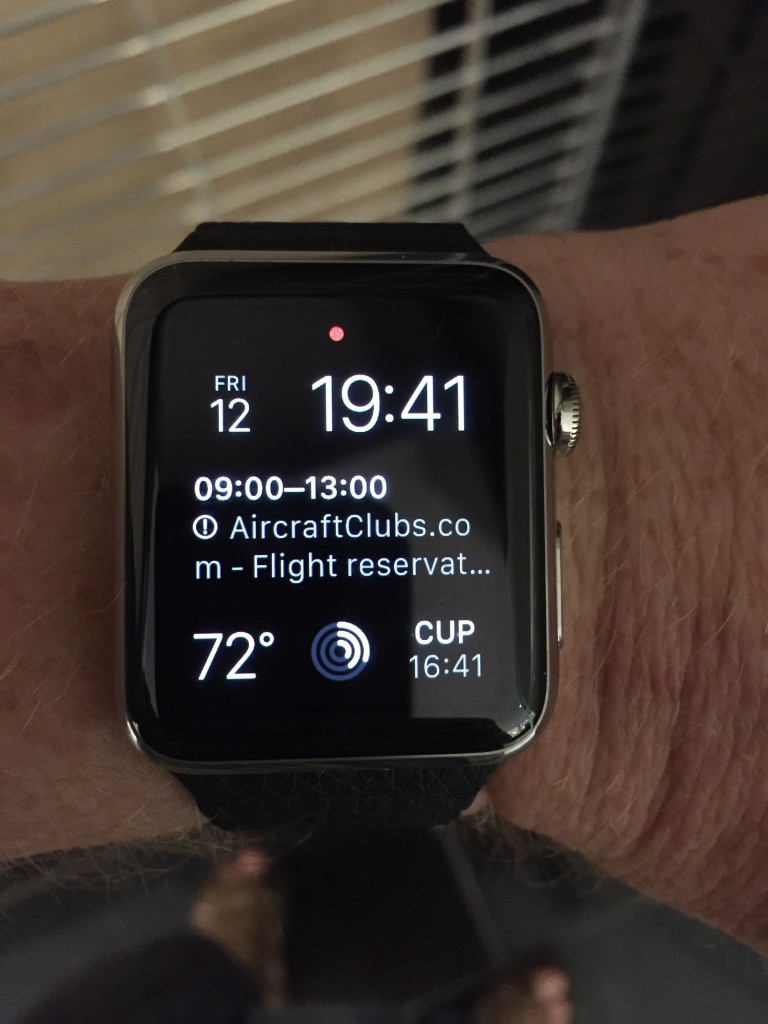 ‘Tis true, I have an Apple Watch on my wrist. Technically it’s my third Apple Watch. I ordered one at 0305 ET on the night that they became available and then canceled the order a few days later, after trying one out at an Apple store and not being able to justify a “use case” in my head for it. A week later I had a change of heart and ordered one again and then ended up canceling it. Several apps were then announced for the Apple Watch and then I could justify a use case to have one, mostly for weather alerts and other important pilot information, so I ordered again and it finally arrived.

The Apple ordering center must love me.

It’s been three weeks and I’m still getting used to it. A lot of the reviews talked about how awful the battery life is but I haven’t experienced anything like that as of yet, at the end of the day I usually still have at least 60% of battery life left, so I end up charging my watch every two days. I don’t know why people obsess about charging their watch every day, most people I know end up charging their phone every day so why wouldn’t this be any different? It just sits on my nightstand charging next to my iPhone 6, which is also charging at the same time.

One thing I have noticed is that the battery life on my iPhone 6 is not as robust as it used to be. I blame constant communication between the iPhone and the Watch for the battery drain, as an Apple Watch can’t do much without an iPhone. In fact, I don’t think it can do anything at all.

Some things that I love about the Apple Watch:

1. ApplePay on my wrist. I have wholeheartedly adopted ApplePay on my iPhone (where it is accepted) and the first time I used it from my Apple Watch I was absolutely delighted. I was in Little Rock getting a bottled water from the hotel vending machine which accepted ApplePay. I just touched my wrist to the reader and it was instantaneous. ApplePay on the iPhone is easy-peasy, on the Apple Watch it’s even easier. Love it.

2. I like monitoring my heart rate. I don’t know why I do it, but if I feel some sort of oddity in my chest or something, it’s comforting to be able to check my heart rate immediately. I don’t often feel a flutter and according to the lack of change in my heart rate, it’s probably gas.

3. I like being able to glance at text messages and emails from folks that I have designed as “VIP”s. I had to tweak the selection of pre-programmed text messages so that they applied to my usage scenario, but the texting experience has been nearly flawless. Siri’s voice recognition works MUCH better on the Apple Watch than it does on my iPhone 6, which I find confusing since she is working from the watch through the iPhone 6 to figure things out in the first place, so I don’t know why she’s better at it on the watch but she apparently is.

Things I’m not comfortable with yet:

1. I find the interface to be a little confusing. I’ve never had “Hey Siri!” work on my watch yet and I can’t never remember what button combination is required to pull her up.

2. I am somehow taking lots of screenshots of my watch face as evidenced by the screenshots showing up in my iCloud Photo Stream. I think I must have a fat wrist or something.

Overall I’m pleased with my Apple Watch and I’m happy that I made the purchase. I’m looking forward to doing more of the aviation stuff with it as I fly more and more this summer.

One thing that I’m surprised about is how many people have commented that I actually have an Apple Watch. A couple of people have stopped me to ask me about it and to have a look at it and I actually enjoy talking about it and giving my honest opinion.

I don’t think the Apple Watch is ready for everyone yet, anymore than the first iteration of the iPhone was ready for the masses back in the day, but I think the Apple is on the right path and that we are going to see some great things develop with the Watch over the next few years.