I am working from home today, and as I sit here at the kitchen table and enjoy my lunch, I can’t help but notice that the house is being buzzed by some very large airplanes today. This is not surprising; this sort of thing happens when you live a couple of miles off the end of one of the longest runways in the United States, despite the fact that the Air Force Base that houses this runway has been officially decommissioned for nearly two decades. 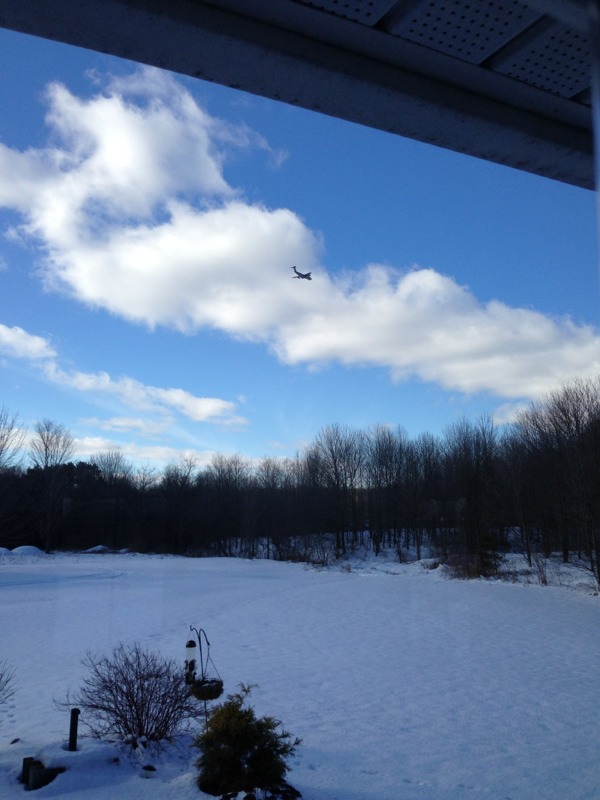 He’s bigger than he looks in the photo.

I find these planes fascinating. From what I can tell, they’re Lockheed Galaxy transports and I believe there are students flying the plane. I think two planes are taking turns doing touch-n-gos. One of the planes markedly pulls back on the throttle just as they’re approaching the house and it looks like the jet is coming to a complete standstill. The other plane opens up the throttle and the engines whine about it, higher and louder. The second plane was loud enough to get Tom’s attention (must be the frequency of the whine) but not loud enough to wake up Jamie, who’s still asleep as of this writing.

Maybe they’re both used to the noise.

So the planes go ’round and ’round and I watch them fly over wishing I was up there with the students and whoever else is on the plane. I bet they’re massive on the inside. I could see myself enjoying the view with a parachute strapped on my back and awaiting for the leader to give the signal to jump. That’s a different passenger approach than the planes that most people fly on. There’s probably no first-class section divided from the rest of the plane by a limp, blue curtain. The curtain probably isn’t even camo or anything because there’s no first class. Honestly, skydiving would be a first class experience to me. The idea of skydiving from a big plane like that (or even a small plane) is awesome. I told Earl that I want to skydive for my 45th birthday this year. He looked at me with fleeting panic but then calmed down. He knows that I’m adventurous enough to do such a thing. To tell you the truth, it’d be quite an adventure to just be in one of the Galaxies when they feel like they’re coming to a halt in the air.

For now, I’ll listen to them whine while I whine with envy a little bit.

Just as I was finishing up this entry the whine was replaced by the traditional roar of jet engines usually heard around passenger airports. Since Griffiss doesn’t have commercial service, I had to take a look to see what was flying in and saw that DHL must be having some jets serviced by that does that sort of thing on site. Nifty! I need to work at home on Thursdays more often.