It was President’s Day 1978. School was closed for winter break. Mom didn’t work yet, so Dad rode to work with Gramps and Mom got the car for the day and took us to Syracuse to visit with Grandma City.

It was a typical day in the middle of February in Central New York. There were light flurries but nothing out of the ordinary. I don’t remember much of the visit with Gram, but I do remember that Grandpa was at work at the country club.

The snow started to pick up a little bit in the afternoon, so Mom thought we should head back home before it got really bad. We did live in the middle of the Lake Ontario snow belt, so the roads could get treacherous quickly. The windshield wiper switch was broken on the car and the only way to turn on the wipers was to pop the fuse back into place. The washer part didn’t work. Grandma gave Mom a bottle of windex and a roll of paper towels. If we had to pull over to clean the window, we would. We loaded up in the ’71 Heavy Chevy (my Dad’s muscle car) and headed north on Interstate 81.

As we crossed the bridge over Oneida Lake and into Oswego County, the snow picked up a little bit, but again, it wasn’t anything out of the ordinary for that time of year. I was sitting in the back seat, smack in the middle of the seat. I liked it there because I could see both Mom and Jennifer in the front seat. A small blue book, pocket sized, sat next to me. It was a book of Peanuts comics. I was reading them on and off.

As we approached Exit 32, Central Square, I remember begging my Mom to get off. “Let’s go home on Route 11.” For reasons I can’t explain, sirens were going off in my head. A sort of nine-year old spidey-sense, I suppose. “I just want to get home”, Mom said, as we passed the off ramp. “Johnny, move over, you’re blocking my mirror.” I moved into the seat behind my sister. I put my seat belt on, even though that wasn’t the thing to do back then. Heck, the shoulder belts for the front seat were the kind that got tacked up along the top part of the roof.

It started snowing a little more. We came around the curve where there’s a pretty good sized hill. An overpass crosses the hill about 2/3rds of the way down. Traffic was slowing. There were lights. It looked like a truck was stuck under the bridge. Mom was in the right lane. She down shifted into second. She looked in the mirror. I turned around and saw a truck. A really big truck. It was behind a blue Pinto.

Then there was a brief moment of blackness and a loud noise.

I opened my eyes. The car was crushed in around me behind the passenger seat. I could see the sky through the roof. My mom had grabbed her head, there was sharp metal over her where the roof used to be. The windshield was cracked. It was a round crack with spider marks. My sister looked up and screamed.

Blood. Blood coming from Mom’s head. The car was off and still in second. We were stopped.

“Is it bad?” The first words from my Mom. She could speak.

I said to mom, “We won’t need to get the windshield wipers fixed.”

I tried to push the back seat back into place. The side window was gone. The ceiling was coming down on me.

Mom started crying. Jennifer was screaming. People were running towards us. My chin hurt.

They got the passenger door open. Jennifer jumped out and then I pushed the seat forward. I left my book behind.

I remember thinking, “I’m walking on Route 81! People aren’t suppose to walk on Route 81” as I looked down at the pavement. We were being led to the Pinto. The woman smoked. She had a carton of cigarettes in the back seat. She was driving her new car home and had stopped for groceries.

A few minutes later a man named Harry came and asked where we lived. He had spoken to Mom. They were getting her out of the car putting her in the ambulance that had just arrived.

I then started crying.

“Please take my kids to their father.”

I remember hearing that. “I can get us there, I know where to go.”

We got into a truck with a man we didn’t know. His name was Harry and he talked to the fire department and ambulance and got some information.

“Go to Sandy Creek. Dad’s store is there.”

I don’t remember much of the ride. I remember walking into the store and Dad looking puzzled. “We were in an accident”, I told Dad.

We were told to go into the office while the man we didn’t know talked to Dad. He couldn’t close the store. He made phone calls.

That night we had dinner with Aunt Maggie across the street before heading to Syracuse to see Mom. Her head was wrapped in a bandage and she had dozens of stitches across her head. She walked into the house and said “Mommy has a funny hat.” She was crying. She would be staying with Grandma and Grandpa City for a few days. We did too if we wanted to.

A few days later we went to the Exxon station at Exit 32, Central Square. There was the Heavy Chevy, no longer looking like the muscle car my Dad loved. We looked it over. Mom was crying.

“I’m sorry.” My dad was silent. Just before leaving, I reached through the mangled roof and grabbed my blue book, the one with the Peanuts comics. It was on the back window behind the passenger’s seat.

This morning I sent my Mom an e-mail. “Don’t go north of the bridge, and if you do, get off at Central Square.”

She knew what I meant. I’m happy that I was able to tell her that, 33 years later. 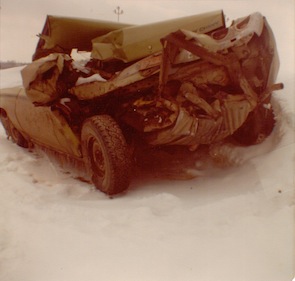 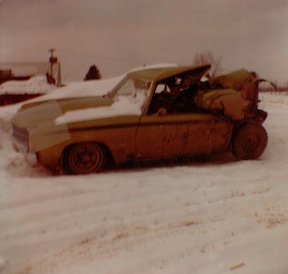