Today we went to Epcot. As you enter Epcot, you’ll notice walls and walls made of granite with metal plates attached. On these plates you’ll find thumbnail shots of various Disney visitors who chose to contribute to “Leave A Legacy”. I believe the program ran from Fall 1999 to June 2007.

Here’s a blurb about it:

The Leave A Legacy program, first launched at Epcot in Fall 1999, has been discontinued as of June 16, 2007. The current display of more than 550,000 tiles at the main entrance of Epcot will remain for the time being. The Leave A Legacy Locator station will be relocated to the Camera Center underneath Spaceship Earth. If you need to get information about your Leave A Legacy tile from home, contact the following email address: WDW.EC.legacy@disney.com

Introduced for the Millennium Celebration! Granite and steel sculptures are being covered with engraved images of Guests from all over the world. Here’s how it works: Photo Capture Stations will take your photo digitally. It will then be etched onto a steel tile. Within approximately four days, the tile will become part of the stone sculptures.Leave A Legacy The cost is $35 for one image per tile, $38 for two images per tile, plus tax.

There are computers at the site to show you where your tile is located. Certificates will also be mailed to you so you can come back on a future trip to see your Millennium image. Also within about 2 weeks, your image will be posted on the Internet at Disney’s Leaving a Legacy page.

“The Leave a Legacy plaza was designed by veteran Imagineer John Hench, along with a team of Walt Disney Imagineering interns. Hench started as an artist with The Walt Disney Company in 1939, and went on to help design and build Disneyland. He was the original art director for Epcot, and chief designer of Spaceship Earth. The megaliths range from 3 to 19 feet high, and the heaviest weighs more than 50,000 pounds.” (Disney’s Press Release)

Earl, Jamie and I took the opportunity to find our two photos, from 2000 and 2007, amongst the thousands that are displayed. Should you go to Epcot, here’s where you can find us:

I think it’s important to Leave-A-Legacy. So we are going to do this for a while. If you send or e-mail us a picture of you pointing to either one of our photos on the Leave-A-Legacy walls, we will donate $25.00 to your favorite charity.

Since the program was discontinued, Disney is no longer able to print our pictures out but I did snap a photo off the screen when the cast member was looking up our information. Look who had the red beard back in 2000! 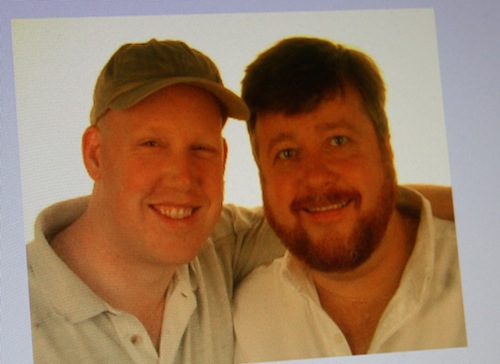