I tried to get Tom to look at the camera but he was having none of it.

Earl, Jamie and I have been in Buffalo for a good part of the weekend. We were here to see the Buffalo Bandits take on the Philadelphia Wings in a lacrosse match at HSBC Arena. The cheering was divided last night as Earl was cheering on the Wings and Jamie was cheering on the Bandits. I would utter “go S U” from time to time because the orange clothing was confusing me. Buffalo lost and Earl ended up with a tub of popcorn turned upside down over his head. He found popcorn in his underwear this morning.

We stayed at the Embassy Suites in downtown Buffalo. Jamie stated that this is one of the nicest hotels in Buffalo. The suite was nice but the breakfast buffet was a little bit of an experience.

Oh, and there wasn’t a set of tongs to grab the bread to make toast. This sort of bugs me. Now, it’s not because I’m some sort of germophobe because that is hardly the case (though I have been known to douse people in Lysol if they seemed pukey to me), but I think that if one finds themselves in a buffet like environment without the appropriate utensils to grab food, you have two choices.

1. Ask for the appropriate utensils and use them when they arrive.

2. If you’re impatient (like me), grab a napkin and use that to grab the bread or the muffin or the fruit from the serving area. I don’t recommend this approach with salad items, soup or chili.

So there was a stack of bread in the little bread holder and this woman with really big hair in line in front of me. The smell of Aqua Net did not go unnoticed. Faced with the dilemma described above, she opted for her own approach.

With her bare hands, she grabbed a handful of bread slices, counted out how many she wanted, and then threw the rest back into the bread box.

Ewwww. Actually, I think I uttered a “Wow” that went relatively unnoticed. I don’t know where her hands as been but I certainly knew where they had just gone. I didn’t like that.

Not to be deterred, she jammed her pawed up bread onto the conveyor like toaster and watched it make it’s way through the little heater. I walked around her, grabbed a napkin and found some unpawed wheat bread (she predictably went for the white bread, noticed the snob in me) and loaded to pieces of wheat bread on the conveyor. Her toast plopped out the bottom of the machine at the same time and she heaved a sigh of disgust at the tanning of the bread so she put it through again and cranked the heat to high. I could see my wheat bread getting uncomfortably warm as it made it’s way through.

“I don’t think it’s charcoal season yet”, I said wryly, as I turned down the toaster to a reasonable level. I always have to interject a little humor before I fly into hysterics. Think of my humor as a warning shot across the bow. You can usually tell the difference between a true attempt of me being funny versus the use of humor to control my temper. She gave me an icy glare and blew some Aqua Net fumes at me.

My bread plopped out the bottom of the toaster a few moments later and I extended courtesy and cranked the heat back up.

“Bon appétit”, I shared with her, trying to be courteous. 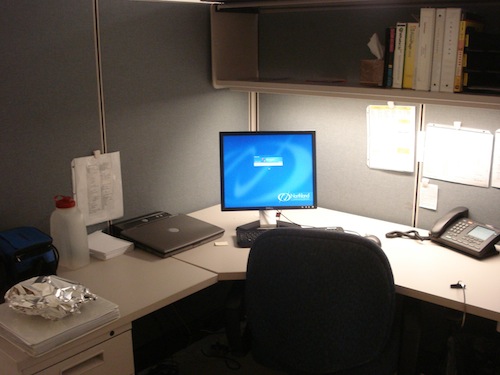 So today at 5:00 p.m. I shut my computer down, grabbed the belongings in the box that was sitting next to my desk, and walked out of the half of cubicle for the last time. My time at the job I have had for roughly the past five years has come to an end.

It was a bittersweet day for me. I was taken out to lunch by the manager of the group; I had a lengthy exit interview with one of the VPs and the President of the company shook my hand and visited with me a number of times throughout the day.

I think I did good for the company. I hope they enjoyed my stay as much as I did.

My new job begins Monday morning. It is finally sinking in that I have a new job and I will have a new cubicle and new co-workers in an entirely new environment.

Finally! The way it’s suppose to look in February here in Central New York. We got about a foot of snow overnight. This will make many happy, including me.

In the interest of having family television viewing time on the couch, I have watched all four hours of “American Idol” that have been broadcast thus far this week.

These are four hours that I will never get back.

Now I am the world’s biggest armchair critic and lord knows that I definitely do not have the chops to sing up there on stage like the next Really Big Famous Person but I know good music when I hear it and I ain’t hearing it on this season of American Idol. The judges keep crowing on and on about how this season is the best season of talent thus far but I think they have to say that because they certainly don’t want the illusion of Idol slipping in any way and perhaps if they say it enough they’ll start to believe it.

There are a few things about this week’s performances that stuck out for me:

1. This Alex Lambert guy has the *exact* same hairstyle as Carol Brady. It’s not a mullet. People say it’s a mullet but I wore a mullet back when it was business-in-the-front-and-party-in-the-back time and that, my friends, is not a mullet. It’s Wessonality at it’s best.

2. The guy that butchered Kelly Clarkson’s song last night should be escorted out of the theatre immediately and given walking papers.

3. The girl with the harmonica has new teeth.

4. I really miss Paula’s “I’m not drunk or stoned, no really” shenanigans. She was entertaining. I love Ellen, but she looks terrified to be up there and she feels really out of her element.

5. Kara is no Paula either and if I was the halfway decent guy with the scruff and all that, I would be pissed if the judges tried to upstage me with their swoony antics. On the other hand, Kara’s fawning over Casey(?) is typical of record industry behavior so I shouldn’t be colored surprised.

7. I don’t know if the acoustics are bad in the auditorium or what but barely anyone is singing on pitch. They flirt with the key they’re singing in but they dance around it quite a bit. If they were all sharp or all flat I could blame acoustics, but there’s not even consistency there (not even during a single performance) so I think that it’s just a lack of ability.

I know. I’m the world’s biggest critic and like thousands of other people I think I know it all. Earl enjoys the show so I sit and watch. The only thing I find mildly interesting is if Ryan Seacrest will look über or just mildly hot, so I guess I’ll concentrate on that.

It’s much easier than recapping the show… 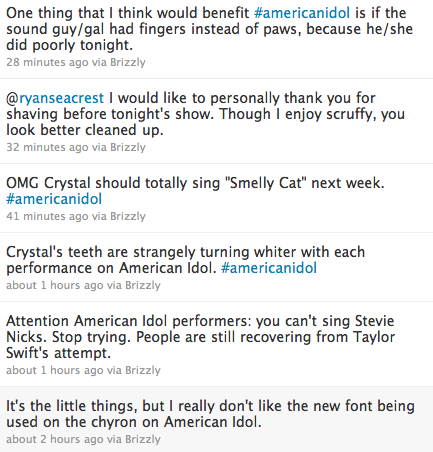 … my Tweets as typed live during tonight’s “American Idol”.

Apple has started screening and/or removing apps for adult content on their app store for the iPhone/iPod Touch. This will also extend to the iPad when it is available.

While I’m not a huge fan of this sort of thing (Apple censoring their app offerings in this manner), I sort of get where they are coming from with this. I think Apple can easily restructure their store to age appropriate offerings and I encourage them to do so.

In the meantime, I will continue to enjoy PUMA guy from time to time. 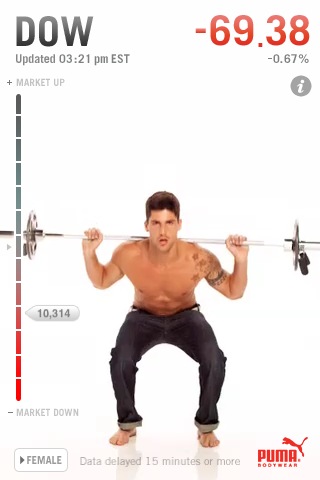 So on Sunday when we were in New York a very handsome man crossed our path. I immediately noticed his brownish-blond beard as he made his way up the street in front of us. I noticed him and then I did a double-take. It was then that I realized that I knew that furry face. I yelled out his name to see if my suspicions were correct and he turned in my direction.

It was then that we met Jimbo face to face for the first time. He was racing to catch a bus so we weren’t able to chat much but we shook hands and I introduced him to Earl and Jamie.

It’s always fun to meet another blogger on the street.

The National Weather Service has issued a Winter Storm Warning for our area. We are expected to get …

… six to 12 inches of snow before Wednesday morning.

I don’t know when half a foot of snow became such an urgent matter in Upstate New York but the warning has blared on the Emergency Alert System and has been blasted on radio and television stations in the area.

I get it if downstate gets that much snow, they’re not used to it. But up here? That’s what we are known for!

When did this region become so pussified?

I’m not a huge fan of the weatherman on the local station. He tends to be overly dramatic whenever there’s anything more than a stray puffy cloud in the sky. I don’t want that. I want the forecast delivered in a calm, rational manner. If I want hysteria I can certainly find it elsewhere.

As he went on and on and he got more and more excited. I pictured him jumping up and down with excitement in his little home studio from where he calls his forecast into the stations that contract him. I wondered if he was wearing sweatpants.

He then started talking about the “Grand Daddy of all storms” moving up from the Carolinas. There was something about Western New England and some swirling over the Hudson Valley, a retrograde and then some Atlantic moisture.

This “Grand Daddy Of All Storms” was going to dump … wait for it… “possibly as much as a foot of snow in some parts of the listening area.”

I had visions of having to contract a road snow plow to clean out our driveway before he announced expected accumulation. I had thoughts of 2012 coming early with this Grand Daddy Of All Storms bringing a white armageddon down upon us. I was ready for Judgement Day.

It was then that I jumped out of bed, slammed my finger down on the power button and then reprogrammed the radio to a different station for further alarm duties.

I don’t need unwarranted hysteria like that in the morning and especially from an NPR affiliate.