Yesterday Earl and I decided to take a drive up into the Adirondacks. It’s fall foliage season in these parts and while it’s not quite peak season yet the colours are quite impressive. It wasn’t a long drive to our first stop, the hamlet of Old Forge. 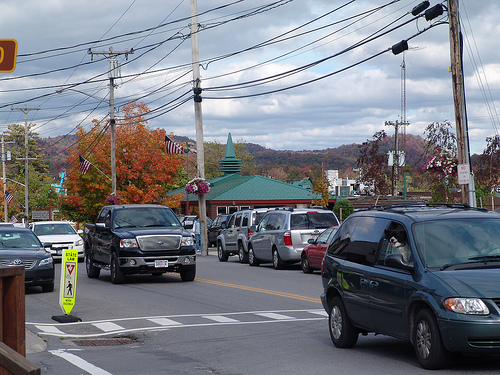 An impressive display of colour in front of the old Howard Johnson’s in Old Forge.

Earl and I walked around town a bit, stopping at the various shops and admiring this and that. One of our stops included the “Life Is Good” store, which was quite busy. 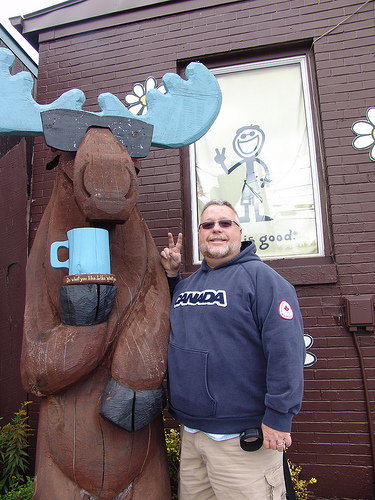 Earl poses with a friend.

We also went to Old Forge Hardware which has much more than hardware, in fact, they bill themselves as the most general store in the Adirondacks. It’s here that I bought a new Whirley-Pop and some gourmet popcorn, as well as some treats for Tom. On our way out of the store I noticed some a wild selection of colours in the distance, so I had to snap a photo. 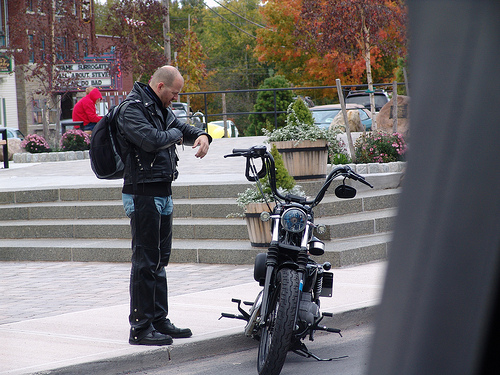 Colourful leaves in the background and by chance a hot biker in the foreground.

There were a lot of folks riding their bikes and dressed in full leather, if you happen to notice that sort of thing.

After Old Forge we headed north and drove through the Fulton Chain of Lakes and then headed further north into the more desolate area of the Adirondacks, winding our way through several hamlets and towns along the way. 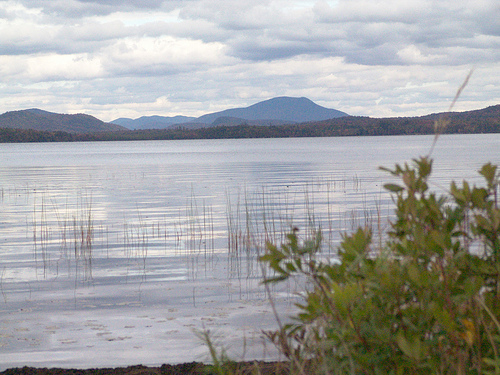 After driving north an hour or two we came across a sign that indicated we were pretty much in the middle of nowhere, so I turned left and made the 105 mile trek to Watertown. By then it was dark and rainy so we decided to catch a movie before heading home. We got to the theatre just in time to see “Fame”. I wouldn’t consider it a waste of money in any way but I felt like I was just skimming through a plot without any sort of depth at all. There were women in front of us who squealed before the show started that they were going to sing along with the soundtrack; it’s too bad there’s only one song from the original in the show and it doesn’t really lend itself to singing along. I’m glad they didn’t sing.

Oh, naturally I took my obligatory 365 days photo along the way. 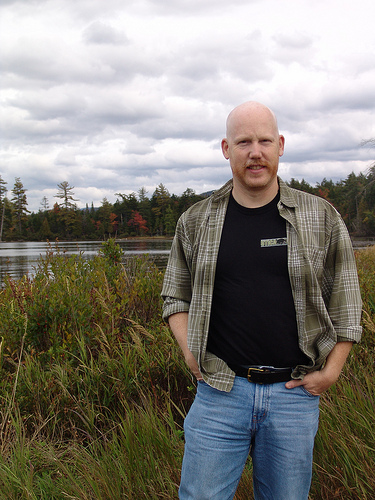 More pics from the trip are available here.