As I left the office for lunch today, I noticed a very large plane in the sky headed toward the old local Air Force Base. This is a rather routine thing in these parts, as there are always large jets flying in and out of the maintenance facility and training operations at the base. It was five minutes later when it appeared to be flying over the house as I pulled in the driveway; it was banking right over the driveway, low enough to be quite impressive. This struck me as rather odd as the turnaround time from the base and back should have taken a little longer than that.

I made my way into the house and readied my lunch, hearing the jet pass over again. I dashed out to grab a photo.

It was then that I realised that there were two planes doing maneuvers so I decided to sit on the back patio and watch them do their thing while I ate my lunch. The planes were low enough that they made quite a rumble. I waved to the pilots as they flew over but they probably didn’t see me.

With the planes overhead during my lunch hour my mind got to wandering to the days of my childhood where many Saturday evenings and Sunday afternoons were spent at the local airfield. I think I was around 7 or 8 when my Dad first soloed in his training for his private pilot’s license. Both Mom and Dad belonged to the Pilots Association at the small airfield and there were quite a few guys (and a few women) that were taking flying lessons. Each week an instructor flew up from this area (ironically) to where I grew up to give all the weekly lessons back to back. Even after Dad soloed and progressed his way to his private pilot’s certificate, we still went to the airport on many summer nights to join others from the club and have a barbecue, play games in the picnic area and go for airplane rides. Usually after the lessons, the instructor would take each of us kids up with him. We’d sit in the pilot’s seat of the Cessna 150 at the controls and he’d sit in the co-pilot’s seat. He’d keep his hand off the stick as we took off, controlling only the throttle with his hand and the rudders with his feet; we were pulling back and easing the Cessna into the air. I remember one occasion where I pulled back a little hard and the stall warning went off. The next week I tried again and nearly took the tops off the cornfield at the end of the runway, but Bob (the instructor) never got worked up and we didn’t crash. I loved the feeling of being in the pilot’s seat of N7177F.

One of my favourite moments at the airport was captured in this photo. Here I am standing with all the guys after their flight lessons. It was one of the first times that I felt like one of the guys because not only was I standing with the group, but I had flown in the pilot’s seat, just like they had. 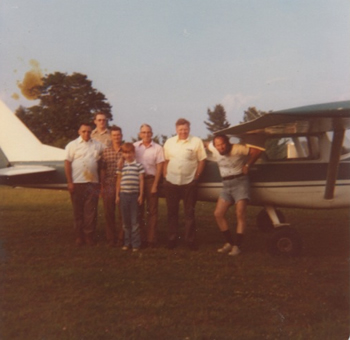 I’m the shortest one in the bunch.

I think I was in grade 8 when Dad and Grandpa bought a Piper J-5A and rebuilt it. I remember that plane sitting in the garage, being taken down to the bare metal before being rebuilt from the ground up. I remember the excitement I felt after it was deemed airworthy again and was able to go for a flight with Dad. Dad and I would fly to other airports in the relative area for a Sunday pancake breakfast (when the weather cooperated); there were many of these around as they were often used for fundraisers for their local community or the airport’s flying club. Grandpa would fly ahead of us in his homebuilt and because my grandfather always did his own thing, he’d usually find himself on the ground before us and anyone else that might have been in the pattern on approach to the airport.

As I sat watching the two Galaxy C-17As fly over the house today at lunch it was then that I realised that one of my favourite vacations was when I joined my Dad and Grandpa on a trek to Oshkosh, Wisconsin for what is now called the EAA AirVenture. Ironically we drove out there but there were a lot of planes and a lot of people interested in flying and some amazing aerobatics. I think it was probably the first time that I felt any sort of closeness to my usually distant grandfather and I really enjoyed that time with my Dad. It was probably one of the first times that Dad and I talked about guy stuff. I could tell that both he and Gramps were squarely in their elements amongst the planes and other pilots. They took me to a bar for dinner and drinks and introduced me to other pilots and their sons. I really liked that trip.

I love to fly. I admire those that do it for a living in any capacity and I admire even more those that do it for fun (and usually there is a combination of the two going on.) Commercials flights are great (aside from the tourists) but flying in a two- or four-seater is where I really want to be. Airport hopping in a Cessna or a Piper on a Sunday afternoon is my idea of a good time. Earl has never flown in a small plane before and I want to give him that experience at least once in my life.

Flying season has not yet come to a close in these parts and I think I’m going to have to see if Dad wants to go for a ride before he puts the plane, a two-seat Acrosport, away for the winter.

Lake Ontario from the Acrosport, courtesy of my cell phone camera, in 2005.

It’s just a typical day at work, and a good one at that.