This is a tech-related post but I have to vent about something so I’m putting it on my regular blog instead of posting it on one of my tech blogs.

The other day I posted that I started using an iPhone app called “TrailGuru” in tandem with my cycling. The app promises all sorts of geeky wizardry to accompany my cycling regimen by allowing me to track how many feet I climbed, how fast I went, how many calories I burned and the like. It even allows me to map my route to share with the world. The screen looks something like this. 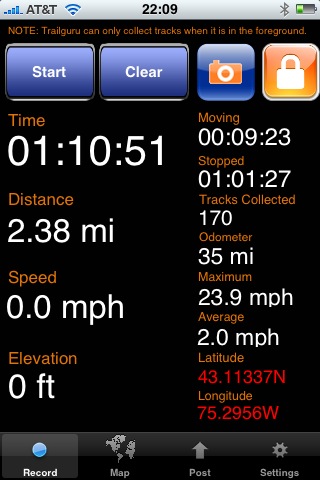 Here’s the thing. Apple says that they give the premium computing experience to their users. They are the chicest of the chic, the finest of the fine and the shiniest of the shiny. This is why they have the power of approval on their app store; they don’t want anything installed on the iPhone that is going to compromise the iPhone experience. This fact has never been so prevalent than when Apple denied the addition of a Google Voice app, saying that it duplicated too much of what was already offered on the iPhone.

I guess I can get that, though I don’t really agree with it.

While TrailGuru promises the world through it’s application, it can’t really handle the iPhone very well. For two days in a row now the program has crashed whenever a text message is sent to my phone. The little pop-up comes up saying that I have a text message and then all is lost on TrailGuru. Everything but the timer comes to a halt, the battery drains and the phone gets really hot.

It’s a good thing this app is free.

There has been a small wave of iPhone abandonment in the tech world since the denial of Google Voice being added to the app store. I haven’t jumped on that bandwagon yet; for the most part I love my iPhone 3G dearly and I often find myself marveling at what I can do on this little technological wonder. However, I find it hypocritical of Apple to allow apps such as TrailGuru in all it’s crashing glory to be added to the app store fine and dandy when it can be crashed by something so obvious as a text message when they won’t allow better apps to be added because of a purported compromising of the Apple experience. That is kind of big brotherish.

In short, do I love my iPhone? Yes. Would I buy another one? No.