Earl and I had pretty much decided that we weren’t going to go to Saranac Thursdays for the most part this summer. While the activity is enjoyable, it also chews up a Thursday night and quite a few brain cells at the same time. The supper afterwards invariably is too big and then we end up feeling lethargic the next day.

Guess where we ended up last night. 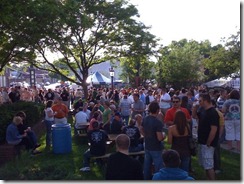 Rumour had it that a former co-worker was in town for the weekend and would be out and about so we decided to head down and join the fun. Moderation is the key. I cut my beer consumption in half (and still had whacky dreams during the night) and we cut our food consumption down at Zebb’s afterwards. Hopefully I was only half as silly and/or obnoxious.

I also got to chat with my friend Christine (another former co-worker), who is now making a go at it with an internet based business: On Location Vacations. I find this to be wicked cool. She’s writing for other sites as well; quite impressive. I have always been impressed with Christine.

Earl took a couple of photos using our friend Shirley’s camera, but I don’t know that I’ll get to see them. Apparently one of the photos made Shirley blush. I’ll see if I can convince her to share with the class.

I think we’ll end up at Saranac Thursdays again during the summer, but judging by the way I feel today I’ll probably stick to bottled water while hanging out with my friends.

All in all it was a good night with a little lesson thrown in for good measure: moderation is the key.