I have discovered a way to calm myself down when I get stressed at work. Yes, I am still plugging away at the binaural beats experiment that I mentioned last week but occasionally at work I need an image for me to focus on so that I can re-center myself.

Naked photos of my favorite guys would do wonders but would probably not be appropriate for work.

Instead I have a photograph of a sunset as my desktop background. I recently discovered this particular photo and I found very quickly that it helps me find an inner peace. In this photo the landscape is simple. There are a few scraggly mountains with a plain off in the distance. It all seems so natural and untouched, just as nature intended. There’s no one around, instilling a quiet in the photo. The sky even seems quiet as it is filled with muted hues of blue and red. The sun sets off in the distance, gently falling below the horizon, with the promise that it’ll return the next day.

The special thing about this sunset is where it was photographed, for the photo I focus on is a photograph of a Martian sunset, and I find it amazingly beautiful. 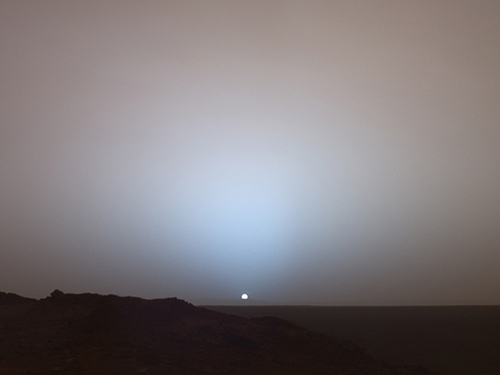 A larger version of the photograph is available here.

In this season of “goodwill toward men”, the same season that has been highlighted by the fatal trampling of a man trying to do his job at a Black Friday sale, all in the interest of purchasing a deeply discounted gift to give another in remembrance of someone else’s birthday that most likely took place in the spring or fall, I would like to address a misconception about my religious beliefs.

There are some that believe that because I am not afraid to question some of the idiocy that people spout all in the name of religion that I therefore do not believe in some sort of higher power. This is not true. To think that human beings are the most evolved and highest power in the Universe is not only naive but greatly insulting to whomever designed this whole master plan. I do not believe that there is a White Man with flowing robes and a beard sitting up in the sky somewhere ready to damn his creations to eternal damnation because they have made errors during this whole learning process called life. I do not believe that there is a whole “pick and choose” process of who gets into paradise and who doesn’t. I do not believe that any man that was granted and therefore wielded such awesome power would have such failings as hate, bigotry and revenge.

These are human emotions, dahling.

I am a reincarnationist. I believe that we come back to learn more and more about this whole human experience. In between human lives we get to hang out on “the other side” for a while, discuss, study and reflect as to what we learned during out last life and then go back and try again. I also believe that there is a higher power that we can only strive to comprehend. This higher power isn’t “male” or “female” but the some of both. This higher power is constructed of love and is all encompassing. It can be seen all around us, in nature, in each others. Some choose to tuck it away but it’s there.

Many organised religions do their best to scare their followers so that they’ll just keep following them. Such organisations are nothing more than a grand attempt at controlling the masses. Those that are controlled fear what lies beyond that control and that’s why they do their best to keep the “free-thinkers” down. They are afraid of those that step outside the box and actually take time to think for themselves.

Do I consider myself an atheist? I do not, but I consider my beliefs to be “spiritual”, not “religious”. My primary belief is that we were designed to think, and thinking is what we should do.

There is a bit of an uproar over an atheist display in the state of Washington. While I fully support this display, simply because I believe anyone should be able to speak their mind, I really like the simple message that they are sharing with the world.

“Just be good for goodness’ sake.”