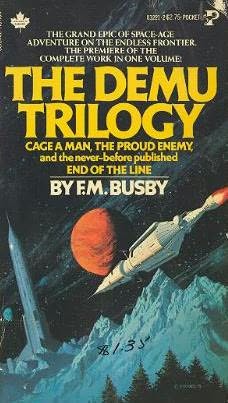 Last night I finished a science fiction novel called “The Demu Trilogy”. Originally three stories entitled “Cage A Man”, “The Proud Enemy” and “End Of The Line”, it was written by F.M. Busby. With last night’s completion it is the 36th time I’ve read the book from beginning to end.

I discovered this book when I was 12. It was buried in a box of books from my Uncle Pete, sandwiched between two copies of “Everything You Wanted To Know About Sex But Were Afraid To Ask”. (I’ve wondered why Aunt Bea and Uncle Pete had two copies of that book, but I was afraid to ask). It had apparently been passed over at a garage sale and was subsequently shoved into this box, along with a bunch of other science fiction books and the aforementioned sex books. The sex books weren’t that informative. I had questions that others would be afraid to answer.

One would think that reading a book for the 36th time would be a chore in monotony but believe it or not, with each reading I find nuances that I haven’t noticed before. I see symbolism that I hadn’t realized in the past 27 years. As a child, my interpretation of the images painted by Busby were, well, child-like. As an adult, I’ve noticed more and more depth to the passages with each subsequent reading.

The basic story goes somewhat like this. Barton, the lead character, is abducted by an alien race called the Demu. The Demu believe that they are the only true people in the universe, all other races are animals. When a non-Demu learns their language, this confuses them as only Demu should be smart enough to speak Demu. So they do their best to make the “animal” look Demu through some pretty rough cosmetic surgery. By the way, the Demu are exoskeletal and like “intelligent shellfish”, much like humans evolved from apes. Barton escapes, leverages his way back to Earth, along with a woman from another humanoid race, the Tilari. I really like the Tilari. Their differences from humans (lack of STDs, conscious control of ovulation, among many other things) make for some very interesting relationships. Earth joins up with Tilara (by the way, we’re called Earthani, not Earthlings, which I find cool) and they go after the Demu, which turns out is just a small part of a big puzzle. I won’t go into further detail, but it’s a great read for any science fiction buff.

It’s amazing how some of the small details of this novel have contributed to the molding of my libertarian beliefs. Sometimes I wish my English Literature professor would just say “write a thematic paper on your favorite novel.” I’d have a field day with that assignment.