It was over three years ago when I started my job at the local telephone company. Having never worked at a telephone company before, despite a strong interest in the field and a near obsession with “all things connected”, I was rather nervous about the new adventure I was about to embark on. I can still remember my first day with crystal clear accuracy. I had arrived early and subsequently couldn’t get into the guts of the building as I wasn’t really sure where I was suppose to go, plus the front desk attendant had not arrived yet. So I was standing out in the front lobby when someone came off the elevator and asked, “Can I help you?” I announced that my name was J.P. and that I was the new guy. The person helping me out asked me to wait where I was and went into the network operations center, where my arrival was announced with a hearty “New guy alert! The new guy is here!” Everyone greeted me warmly and welcomed me to the group. Though I left the position at the end of last year and have just recently returned on a part-time basis while I continue my education, I still really enjoy the people in that group and consider them my friends. We’re a team that works well together.

When I arrived at my desk that first day, aside from the unpopped bags of microwave popcorn at my station (as a gift from my co-workers that had obviously googled me a little bit), I noticed there was a large goose statue on top of the one of the filing cabinets. She was decked out in a two piece bikini because as I later learned, it was August and in August we swim. For the next couple of years, I learned that Goose had a full wardrobe to choose from and would be dressed appropriately for any occasion. She had a Santa outfit for the holidays, rabbit ears for Easter and a cap and gown for graduation time. Heck, she attended the wedding and reception of the team leader, complete with wedding gown and even had a black shawl that she draped over her face when folks were laid off (much to the chagrin of management). Goose was accompanied by several friends, including Duck, Egg, Chick and Cow. When I gave out cubicle name plates for Christmas one year, Goose received her own, denoting “Goose and Family”. I thought she deserved that special touch.

This week the company is moving it’s headquarters to a new building, so we have been packing up the Network Operations Center, throwing out tons of paperwork from back when Verizon was kind and called “New York Telephone” or “NYNEX”. I think I even threw out a manual on how to dial your own call without operator assistance (these people keep EVERYTHING). While Goose and Egg are moving with us, it was decided that the little ones, Duck, Chick and Cow (who also have a selection of cotture) should leave the nest and strike out on their own.

Earl and I are now the proud parents of Chick and Cow. While Earl finds the whole thing to be nuts, I look forward to carrying on the tradition of making sure they’re decked out properly for the season. Chick is in her gardening hat, Cow is doing her thing. I may buy her a mini-pasture with some grass to make her more comfortable. 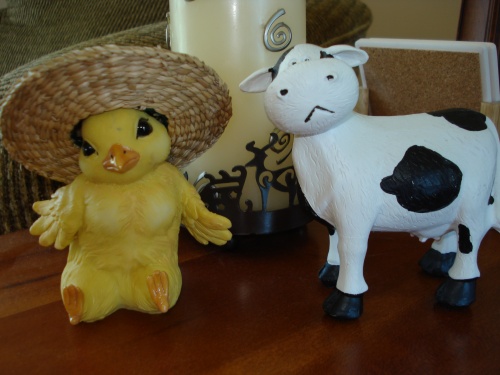