With another beautiful day upon us, I decided to take full advantage of the weather, dress up like a bumble bee of sorts and hit the pavement with my bicycle. Earl took the obligatory shot of me in my cycling gear, complete with my new cycling glasses. I’m also excited because I found my cycling headband and cover so I don’t have sweat dripping in my eyes. 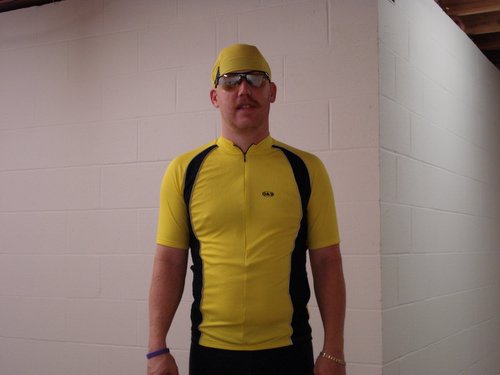 Not really having a destination in mind, I ended up riding the local streets and roads and the Rail Trail that was built back in 2005. All in all I clocked in 25 miles in about 1 1/2 hours. My body is feeling worked out but that’s all good. It helps combat the lingering effects from the field days food from last night.

Years ago I rode a number of times with the local cycling group. They must have had money to burn as their cycling clothes often matched their bicycle. As you can see by the picture, I enjoy dressing up like a bumble bee but I create a huge faux pas by wearing a blue helmet, red and black gloves and then of course my red road bike. This created gasps of dismay in the cycling club. Well, they also didn’t like the fact that I wore my camelback (backpack with built in water supply) while I rode as they preferred to have a van follow along with the fancy water bottles.

I guess I’m a loner of sorts when it comes to cycling, which is really not a surprise since I’m a loner by nature. I am looking forward to riding with Thom in Virginia this fall when the leaves are changing color. He’s a great guy and like minded in many ways.

I guess Earl will follow along with the fancy water bottles. 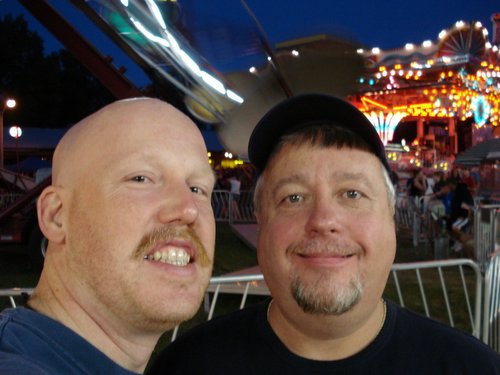 After a lazy day of relaxation, catching up on sleep time via a few cat naps and more relaxation, Earl and I decided to get our day started around 6:00 p.m. After finally showering and getting dressed, we hopped in the Jeep and headed for my home town for the annual “Field Days”.

We didn’t make it in time for the parade, which we heard was rather disappointing, but we did arrive near supper time, so we headed for the chicken barbecue in the beer tent. I waved hello to several former classmates along the way. Good ol’ chicken dinners were being sold for $7.00 a piece. Accompanying your half of a chicken was some macaroni salad, a dinner roll and some cold baked beans. Earl and I have never been able to figure out why they serve cold baked beans. Why bake the beans if you’re going to serve them cold? The chicken seasoning seems to be pure salt, but that may be why they’re being sold in the beer tent, so that you buy more beer. We skipped the beer and stuck to pop.

Attendance seemed to be rather low at the Field Days this year. Back in my day, the field would be shoulder to shoulder with people after the big parade. Tonight you could clearly see from one end of the field to the other. I found this rather odd. We did see several people from my high school days, which is always a delight. We even ran into my best friend from high school. In my junior and senior year people thought he and I were dating, and we could have since we’re both gay and all, but we never dated. On overnight trips with the band and chorus and whatnot people assumed we would share a bed, and we did, but we never did the touchies. Perhaps that was a missed opportunity. Who knows.

It’s funny that my two closest friends in high school were also gay. I had several other gay friends in school as well. Earl has asked what was in the water, as he didn’t remember so many gay people in his high school, which was bigger than my school. Maybe us farm boys like to roll in the hay after all.

After our run at the Field Days, we took the long way home and met my mother at a 24 hour diner for some dessert and some chatter. It was a great spontaneous visit. I like doing that from time to time.

Oh – and today is my 6th blogaversary! “Life is such a sweet insanity” turns six years old today. Yay!