There are many things I enjoy about Canada. I must say that yhere are many, many things I love about our neighbors to the north. Everywhere I turn in Charlottetown there’s a young little bearded hotty worthy of many woof points. The folks of this fine province are very friendly. There are smiles on the faces of the fine Canadian people. It’s nice to be away from the depression that has seemingly tackled the Americans. The Canadians also make great beer.

Tonight I joined Jennifer and David, and Dave’s mom Janet, for their annual trek to a dinner theatre show in Charlottetown to celebrate Jennifer’s birthday. Tonight’s performance was called “The Big Fat Island Wedding Crashers”. 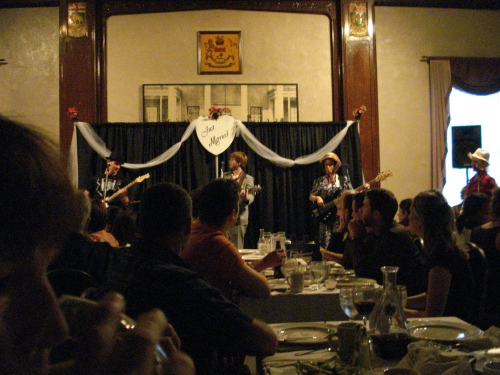 The production was delightful. Full of familiar rock and pop tunes from the 80s and 90s, this group of performers were quite impressive in that they all took turns playing various instruments and singing various parts. I had a wonderful time. They were funny and extremely talented.

As I mentioned before, our fine neighbors to the north make great beer. Tonight’s brew of choice was Labatts Blue. Now Dave, my almost brother-in-law and all around great yet exceedingly mischievious guy, is a beer drinker. Here in P.E.I. you don’t order beer by the bottle, fuck no, you order beer by the god damn bucket. That’s right, the perky waiter or waitress brings you buckets full of bottles of beer. The folks at the other end of our table, who were a very charming couple from le Province du Québec, settled for red wine with their meals. Jennifer and Janet had white wine.

Dave and I downed THREE buckets of beer. Perhaps four. I lost count. I have mentioned an uncountable number of times that I am a two beer queer. Give me two beers and I’m either easy or asleep, hopefully one before the other.

Tonight I had SEVEN. That would be seven beers. SEVEN. That means if I were to count the number of beers by way of the Pointer Sisters Sesame Street song, I would be more than halfway through the track before having to stop.

The two beer queer did it thrice plus one. Roll the “r” in “thrice” when you read that sentence. It makes it sound exotic. To celebrate, I called my mother and left her a slurred voicemail that will undoubtedly haunt me someday and then I called Earl to make sure he was still in the states while I was in Canada. It was hard to tell because the room started spinning. I think I was getting time zones confused. Oh, oh oh – I’m in a different time zone right now! Who knew? There’s another time zone on the North American continent to the east of the Eastern time zone! I guess I never realized that! It’s the Atlantic Time Zone. If I were to go to Newfoundland (which I probably won’t), there’s even another time zone that only counts as half. So if it’s 11:00 here it’s 11:30 there but it’s 10:00 home. Now that’s making my head spin. What’s odd is that I feel as comfortable in the Atlantic Time Zone as I do in the Central Time Zone or when the Eastern Time Zone is not in that fucking daylight saving time.

Tomorrow morning I leave the island and head for Québec. This is such a lovely adventure. It’s buckets of fun.