Here it is the middle of August already. After two days of low humidity and temperatures in the mid 80s, were back to stifling, sticky weather. Let’s hope for a thunderstorm! Actually, if I lived in the midwest I’d probably be a storm chaser, it’s always been a dream of mine to chase a tornado or a hurricane. When I was younger, I used to chase thunderstorms across Central New York. When I was growing up, we used to get fierce thunderstorms off of Lake Ontario. Now that I live further from the lake, the storms aren’t quite as bad. A little disappointing.

Another hobby of mine has been restoring an old computerized cash register system, more specifically, an IBM 3683 and IBM 3684 system. Here’s what the IBM 3684 looks like. 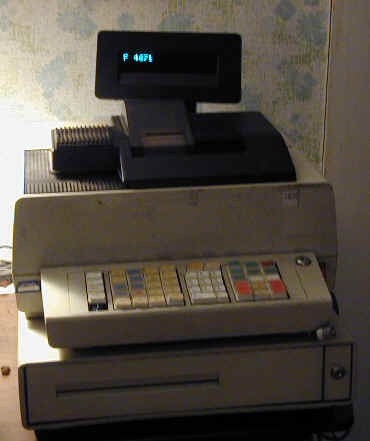 You’ve probably seen one of these before, but they became pretty much extinct in the late 90s when everyone was terrified of Y2K and upgrading their systems. I’m learning more and more about these beasts everyday, and if you know anything about them, drop me a line at jpnearl@earthlink.net. I’m very fortunate that Earl is tolerant of my various hobbies, or I’d be living in the barn by now. Most people find my hobbies like these incredibly boring, I find them incredibly fascinating, but then again, I’ve always been hearing a different drum. By the way, the screen says “F 4671”, which is an error code but I don’t know what it means.

This weekend Earl and I basically chilled out and did nothing, which was nice. A lot of time spent on the computer updating websites and such.

I gave up on my beard and succumbed to the lure of my Mach III. It’s been too hot to grow the beard out, I’ll try again after my sister’s wedding.