Sometimes you just want to stare at the backup singers. 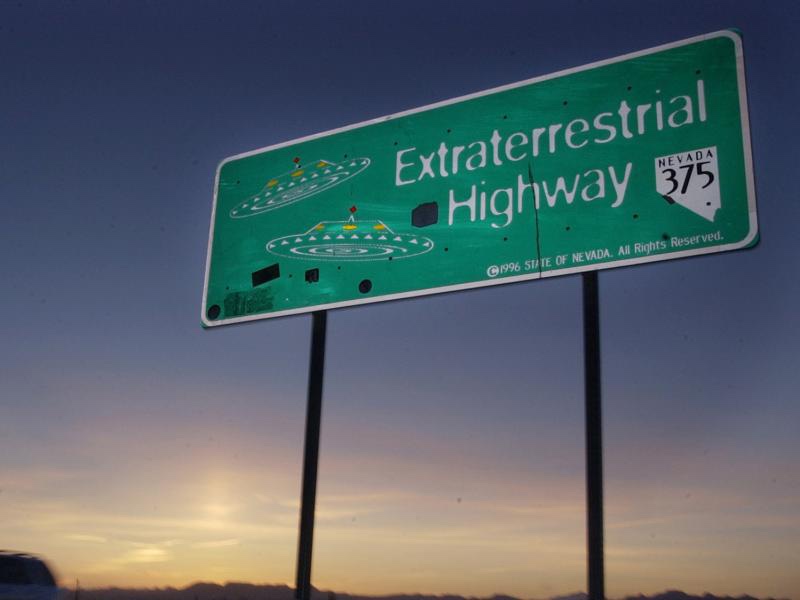 Nevada Route 375 near Area 51. Not my photo, but I have a very similar photo in a photo album somewhere.

I’ve been reading bits and pieces of the latest social media movement, this time folks want to storm Area 51.

It seems to me this would be a great way to get shot.

Earl and I ventured right up to the Area 51 border back in the early 2000s. We were driving a rented Subaru. There was a dead cow in the road at “the mailbox”. We followed the dirt road until we saw signs proclaiming lethal force. There were technology-related devices on poles in the desert and in the distance we could see trucks or SUVs of some sort driving around. Logic dictated the lethal force would be administered through one of these things I just mentioned.

We decided not to risk it and we turned around and resumed our drive through the Nevada desert. Not too far away a military jet of some sort when whooshing over the road in front of us, just a few hundred feet above the ground. It was pretty awesome.

Area 51 is where the aliens and/or alien technology captured by the United States is kept. Ironically, since 2017 I’ve come to believe that Area 51 is more and more of a conspiracy theory since there’s no way the idiot in the White House could ever keep his mouth shut about such a thing. He’d be proclaiming we have only the greatest of aliens. The biggliest. And he’s smarter than them.

On the other hand, I can’t help but look up at the night sky and wish all the intelligent life out there would stop by and help us get our act together. That would be quite something, wouldn’t it? Sentient beings from another world coming to Earth and telling us some secrets of the Universe. Some thing the only reason these beings would come to our planet would be as a conquest and for destruction. I’m sorry, but if intelligent beings traveled vast distances to meet their neighbors, I’m pretty sure they would be evolved beyond the concept of war and destruction. I can’t help but feel in the very core of my being that all this death and destruction and chaos and craziness is an entirely human construct.

The arrival of such beings would really turn the world on its head. Imagine, your religious beliefs, nullified as quickly as Thanos snapping his fingers in an Avengers movie. How incredibly humbling would it be? I fully believe that we have been visited by those from another world on countless occasions, and they do it secretly because of compassion: if they revealed themselves there would be mass suicides across planet Earth because the human ego can’t handle the humility of it all. I’m reminded of a lyrics from an Abba tune, “I’m nothing special, in fact, I’m a bit of a bore”.

How glorious and yet how fully humbling that event would be.

Imagine if humans were to find out that we are all the products of a genetics-related science experiment! A little bit of our stuff was brought here from elsewhere, mixed with some stuff from a caveman type and voila, humans! How will countless cultures survive on one rock? What will happen when they mingle? How will they handle that?

I’m sure parts of the map are failing miserable at this. I’m looking at us, my fellow American.

I can’t help but think extraterrestrial travelers to Earth wouldn’t be bound by physics as we know it. Faster than light travel, artificial gravity; it’s almost like the visitors would have to travel “in between the seconds”, much like Jodie Foster’s experience in the late 1990s movie “Contact”. If it’s going to happen, I feel like that’s how it will happen. Those among us will step aside from traditional Earth believes, educate ourselves to a higher understanding, and evolve enough to find that missing piece in the equation.

And then we’ll be able to visit with those traveling between the seconds.

Until then, a bunch of hoo-haws are going storm Area 51. Go for it, folks.