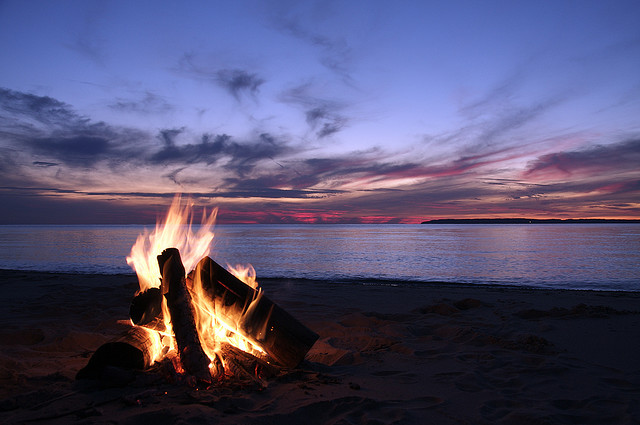 Random photo from an Internet search

I think it was 1984, just shortly before my 16th birthday. My family was camping at a popular campground and marina; we were situated near relatives and friends in our Steury pop up camper. The camper could sleep eight, but it was just the four of us for this trip. Nearby were campers with a permanent site; they were friends of my parents. Their youngest daughter was staying with them and we had fun being teenagers. Her older brother visited for the evening; he would have to head back into town in the morning.

It was late Friday night and we were enjoying a campfire on the shore of the “north pond”. Lake Ontario was a mile or so away, separated from this inlet of water by a thin sandbar. It was easy to get to the beach by boat; from there Lake Ontario looked like an ocean. In the still of the summer night you could hear the waves crashing on the sand in the distance. The small ripples on the pond barely lapped the shore. Once in a while you’d hear a boat rock a bit as it bumped up against its tie down.

The fire burned brightly; it’s familiar warmth was comforting. Slowly everyone retired for the evening; as time closed in on midnight, it was me and the older brother sitting around the fire. We just chatted. I didn’t know him very well; our paths had not crossed a lot, but he seemed down to earth. He had a stocky build, traces of a mustache and typical 80s hair that wasn’t too feathered but still had some wind blown look to it. He liked fishing and the water and doing things along the lakeshore.

I don’t remember what we talked about. I do remember that I felt that I didn’t have to be so guarded around him. The guys in the neighborhood back home were good friends but I didn’t have any ‘feelings’ toward them other than hanging out with the guys. This guy, we’ll call him Charlie, well, he was cute and my biology was telling me that I found him attractive and I was being flooded with feelings that were confusing. I’d known for a long time that I was “different” but what that meant. My parents and sister were asleep in the camper. Outside of the canvas walls I was sitting with a guy I didn’t know that well. I felt like I was burning up. The fire was hot. He might have been drinking a beer. I was not. My not quite 16 year old hormones were raging and he wasn’t any the wiser. He was just sitting there, we were just talking, and no moves were made. I knew that he wasn’t different like me and I was confused as to why I was feeling the way I was feeling. When it was time to call it a night, we shook hands and I felt a tingling just with the handshake. What did this mean for me? I went to bed, opting to sleep on the couch.

My dad was up fairly early the next morning for work; after he left I heard splashing around in the pond and saw Charlie swimming. He was wearing only swimming trunks and was taking a bath in the pond. I thought that was good idea and I did the same. We horsed around as we washed our hair in the cold water and then he got out of the pond, dried off, got dressed, and went back to town, just as he had planned.

Still confused by what I was feeling I was, at the time, inexplicably sad. Other friends would visit throughout the day and my Mom was concerned about how mopey I was. It was confusion, it was horniness, it was a crush on someone that had absolutely no idea as to how I was feeling, and now he was gone. After lunch I went for a walk and found an isolated spot in the woods overlooking the other side of the pond. I sat for a while, under a tree and instantly found myself crying. It was a few minutes before I started to realize what “being different” really meant. My hormones were confirming what I had known deep down all along: I was attracted to other guys. Not just hanging out with the guys, I really liked guys and I wanted to be close to them. I wanted our skin to touch, I wanted to be close to another guy. I wanted to do things that I was afraid to even fantasize about.

It would be several years before I saw Charlie again. We shook hands, we chatted a bit. He’s probably married with a litter of grown kids and probably even a few grandkids by now.

And he never knew how he had inadvertently impacted my life that night we spent just shooting the breeze around a campfire.