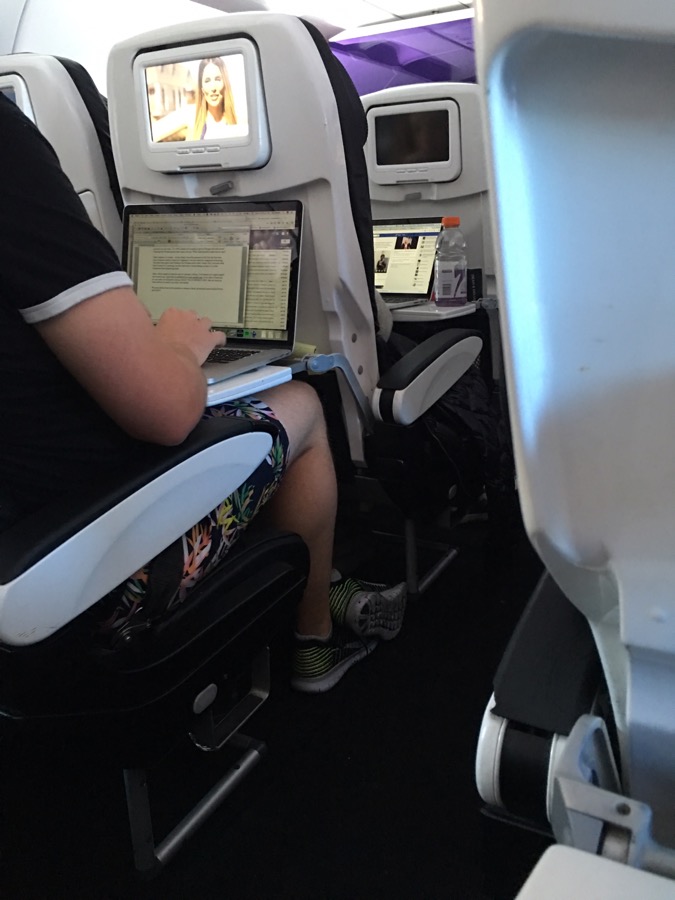 I’m sitting on Virgin America flight 231 from Chicago/O’Hare to Los Angeles. Seated in 6D, Earl is across the aisle to my left in 6C, Chris and Jamie are in 6E and 6F. Jamie always sits next to the window. We are on an Airbus 320. Like all Virgin aircraft, it’s appointed in a trendy fashion with purple lighting, a boutiquy color scheme and decent electronic gadgetry in the seatback in front of me. I have already ordered my food. Once the turbulence settles down it’ll be delivered.

Departure was delayed nearly three hours due to thunderstorms passing through the Chicago area. One of the many things I’m excited about when it comes to moving to Chicago is the weather. The thunderstorms have a little more zing than what we have in our current home. I miss the days of storms with zing like we had growing up near Lake Ontario. Chicago will fit the bill nicely.

Since we are on a trendy airline going to a trendy location, I have been people watching like crazy. At the terminal Earl was seated next to someone who must have been famous in some way but we had no idea who he was. People were asking to have their photos taken with him, shaking his hand, etc. He wore sunglasses some of the time. We didn’t interact with him except when he walked away and forgot his water bottle. Earl followed and returned it to him. He was thankful. It’s the little things that make the world nicer.

In 5C is a young bearded fellow who opened his MacBook and started typing in Microsoft Word (boo) as soon as we got to 10,000 feet. A casual glance at his screen (because I’m rude like that) shows that he’s typing a script of some sort. My eyesight isn’t as good as it used to be but he’s writing a sitcom script described with the tone of “How I Met Your Mother”. There’s other stuff on there but I won’t share it here because I’m not overly rude, just a little rude. The title of the episode or potential sitcom (not sure of the scope of this little project he’s composing ferociously) is clever. I’d be intrigued. I could see his name and I looked him up on IMDB, he’s written a few things for television before and received appropriate credit.

The thing that I really enjoy about this guy is that he has a pad of paper and a MacBook and he had it set up so he could start typing immediately. He opened it up to a blank page in Word and just let his creativity flow. That’s kind of awesome. I find that inspiring.

I often get caught up in the minutiae of how I want to record my thoughts and then I end up losing the creative flow before actually doing anything about it. My OCD of having things “perfect” on my iPad or MacBook screen sometimes distracts me enough that my little ADHD tendencies kick in. I need to find a way to reel this in. A woman I used to work for offered my Adderall but I don’t want to resort to drugs for this sort of thing. I’d rather just tweak my willpower so that I’m able to do what I need to do.

See, now I’m typing my blog entry and I’m being distracted by a screaming kid somewhere in the back of the airplane. Oh look, there’s a dog on the floor three rows in front of me.

I think I’ll go surf the Internet a bit.