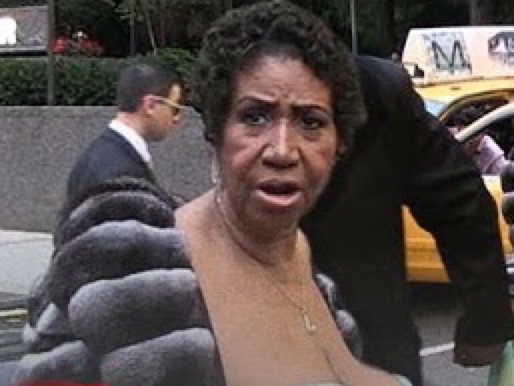 Image courtesy of TMZ through some random Google search.

As a card-carrying, rainbow flag waving gay man I’m going to make an admission to the world right now. I’ve had a few beers, I’ve pulled up on my balls, I’m feeling courageous, so here it is.

When I hear Aretha Franklin start making some raspy, wailing noises that result in people throwing awards at her I suddenly feel the impulse to slam my balls in a car door so I can wail louder than her and possibly earn a Grammy.

Look it, I will be the first to admit that I might enjoy singing the background vocals to “Who’s Zoomin’ Who” once in a great while after I’ve had a few beers. I learned how to spell respect because she spelled it for us, repeatedly, throughout the 60s and 70s ad nauseum. (I’d rather someone just “sock it to me”.) But the truth of the matter is, I don’t really enjoy her vocal stylings, I don’t care for her diva style and honestly I don’t know what all the hype is about. I think she’s the one that started that whole urban yodeling thing where someone tries to shriek up and down the medley like a stripper working the pole, but I didn’t blame her for that until Christina Aguilera started singing about stars reaming before a football game.

This all being said, the woman (Aretha, not Christina) has earned like 18 Grammys and other awards over the years. She has the balls to take hours to sing the National Anthem and no one bats an eye. She earned her props from the people that enjoy that sort of thing and hey, it might not be my cup of tea but other people groove on it and there’s nothing wrong with that.

The truth of the matter is, it’s Aretha’s wailing and my distaste for it that made me realise that not everyone in the world is going to like what I do, what I write or what I say. I might not win awards and I honestly don’t know if I’ve ever driven anyone to slam their balls in a car door but there’s been plenty of people that have laughed at my jokes, enjoyed the applications I’ve written at work or have enjoyed my DJ skills at clubs over the years. And there’s been plenty of people that couldn’t stand me along the way.

I’m no worse the wear for it. And neither is Aretha. So even though you’re never going to find me at an Aretha Franklin concert screaming “You go ‘Re ‘Re!”, someone somewhere is going to take a hit off a bong and scream it with all their might.

And somewhere else, though I doubt a bong will be involved, someone, somewhere, is going to yell, “you go J.P.!”