While I’m out my morning bike ride I allow my mind to wander a little bit. Sometimes I reflect on a dream that I had before waking up, sometimes I think about work, a lot of the time I think about flying. But once in a while I just let my mind go into full geek mode and allow myself the freedom to think about anything that might pop into my head.

One of my favorite places to ride in the morning is along Main Street in the nearby village of Whitesboro. Whitesboro was in the national news earlier this year when the village’s citizens decided to keep the official Village Seal, depicting a settler wrestling a Native American. Some find the depiction to be outside the guide rails of political correctness because it looks like the settler is strangling the Native American. I wasn’t present at the wrestling match that inspired the seal, so I’ll refrain from comment on that.

Main Street used to be NY Route 69 before the building of what is today’s Oriskany Boulevard. The boulevard is the result of the filling in of the original Erie Canal, which passed through the village long ago. With the relocation of Route 69 onto the new roadway, Main Street was bypassed to a certain degree. New bridges were built and other roads were relocated. Today there isn’t much traffic on Main Street. Much of the retail establishments moved to the busier boulevard long ago. The homes along Main Street still have their early 20th century majestic appeal, though I believe some of them have been converted to multi-tenant dwellings. 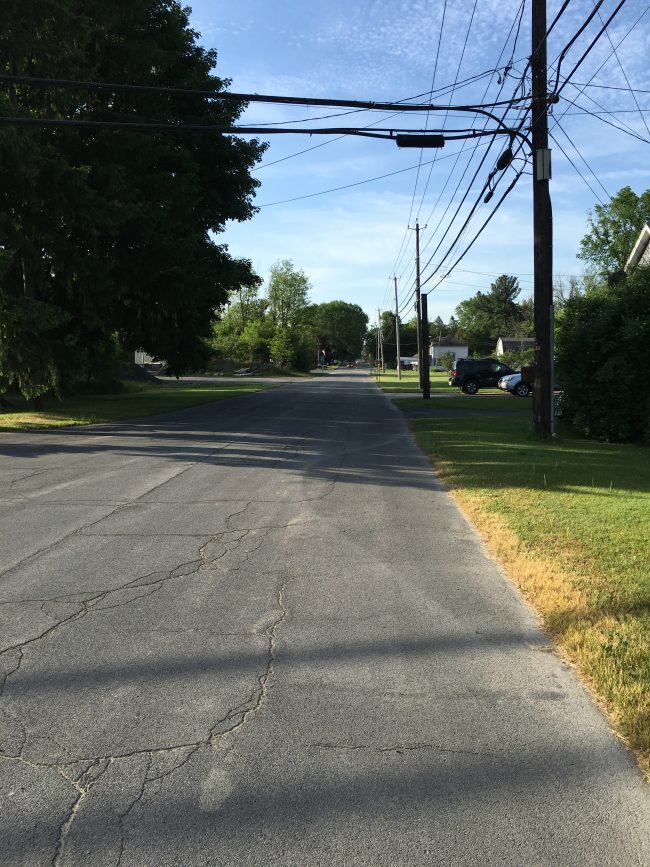 At the west end of Main Street, just west of the village boundary, a short bit of roadway was built to connect Main Street to Oriskany Blvd. The remaining portion of Main Street was turned into a No Outlet roadway. In the picture above, I’m standing on that bit of roadway, near what remains of the small hamlet of Carey’s Corners.

I don’t know much about Carey’s Corners outside of the fact that it was prominently listed on old maps up until the late 1950s. I believe there were several buildings demolished for the building of what carries Route 291 over the adjacent railroad to the north. What is currently labeled as “Carey Road” (another dead end roadway) probably made its way onto present-day 291 (what used to be Route 12C until 1972) to take one out of Carey’s Corners to the north.

Little bits of highway history like this make me wonder what today would be like if we as a society didn’t develop such a fondness for automobiles and the building of the modern day Interstate system. Would life be as fast paced as it is today? Would many of us be living in crazy high high-rises while others still lived a rural life out in the country? Would suburbia as we know it be a thing? Shopping Malls? Big Box Retailers?

Many things changed in the mid 20th century with the drive to move out of the cities, follow the freeways and set up life in the suburbs. I really do wonder what life would be like if that mass migration hadn’t taken place. I’m sure the United States would be a markedly different place to live today.