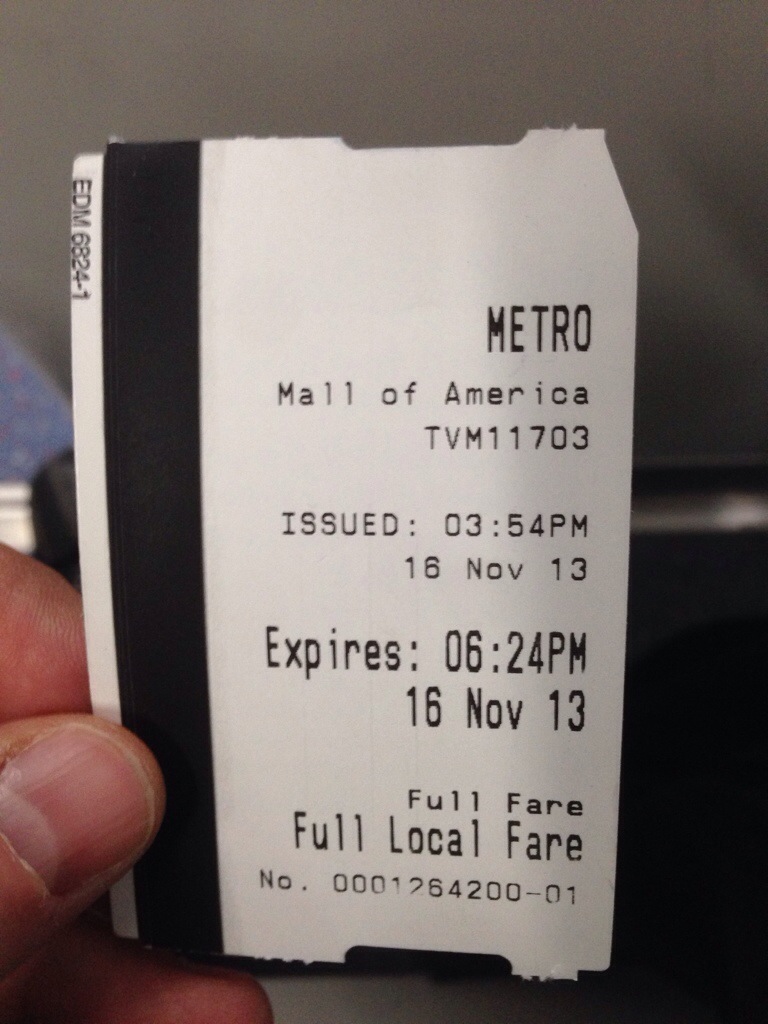 So in Minneapolis they have a light rail transit system. It’s like a subway but above ground for the most part. Similar systems are found in St. Louis and Phoenix. They are actively expanding the system with a line to St. Paul opening early next year.

The rules of the rails are simple: $1.75 per ticket unless it’s rush hour, then it’s $2.25. You buy a ticket at a station and then just get on the train, there’s no turnstiles, no gates. Trains randomly have security folks asking to see tickets and the like. Tickets expire a few hours later, so theoretically you can get multiple rides out of one ticket. The ride from the Mall of America to downtown Minneapolis, basically the length of the blue line, is about 35 minutes.

I just rode the train to MOA and I followed the rules, like most everyone else on the train did. Two security guards came through and wanted to see my ticket. Fair enough. Across the aisle were two folks that didn’t have tickets. They would be fined. To write up the ticket, the officer asked for their IDs. They didn’t have any identification on them. He asked their names. The woman had recently changed her name. It was three words. When asked how to spell her name, she couldn’t. She didn’t know how to spell her name. The officer accused her of using a fake name and she said that she wasn’t, she just couldn’t spell anything. She didn’t know how to read. She did know her birthdate, though.

The guy with her gave his name and birthdate and unfortunately, couldn’t spell his name either. He didn’t how to spell.

Since the blue line passes through MSP Airport, the officers decided that the two folks in question would exit the train at one of the airport stations, since this would make it difficult for them to run. The first officer warned, “if you’re using fake names, I’m throwing the book at you.” She calmly replied that she wasn’t using a fake name, she just couldn’t spell.

The officer had one hand on his taser as he escorted the two passengers off the train at the first airport station. They were being seated on a bench as the train pulled away.

While I don’t feel bad for the fare violators, it’s sad when an honor system is abused, I do feel bad for them in that’s they apparently didn’t have the means of being able to spell their name, which meant that they couldn’t read. The given birthdates indicated that they were both in their early 30s. Something in their early life failed them, whether it be the education system, their family or whatever else contributed to their need to violate the fare requirements today.

Observing this opened my eyes just a little bit. I hope they find a more solid path.