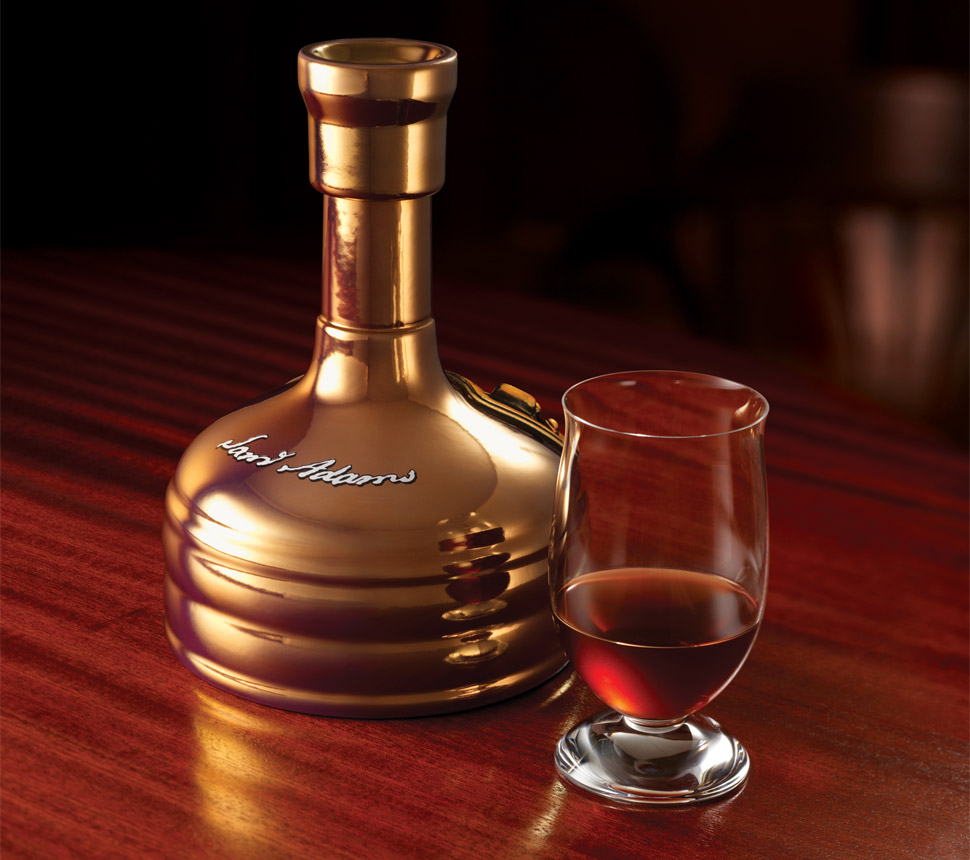 So I’m an avid listener of the Michael Smerconish ( smerconish.com ) program on Sirius/XM POTUS 124. I usually end up listening on demand, but driving around the evening afforded me the opportunity to listen to the replay at “6 East” or as I like to think of it, 1800 ET.

One of the interviews during the last hour was with Jim Koch, founder of Sam Adams. They discussed a beer that I have never heard of, Sam Adams Utopias.

From the way they described it, it’s like the Cognac of beer. Michael said that he really felt that it would have been appropriate to enjoy a cigar with this beer.

I’m always looking for different beers to try and I have to admit that this Sam Adams Utopias has me intrigued. It doesn’t sound like your typical beer experience. I understand that it is quite pricey, as it is produced in very limited quantities each year. I haven’t looked into where to get it yet.

I am curious to hear if anyone has an experience with Sam Adams Utopias. Is it worth the price? Does it still taste like beer?

Jim said that once opened it should still be drinkable five years later, much like a fine wine. I understand that it is best enjoyed a room temperature.

I’d love to have others weigh in on Sam Adams Utopias. I think a trip to Boston might be in order.

Photo used without permission from uncrate.com

So today I had a half day off from work. It’s been a while since I’ve had a day where I didn’t really have something planned so I decided to take the opportunity to go on a little road trip. My destination was the Southern Tier of New York State.

As a certified road geek scholar, I am proud of the fact that I have driven every mile of Interstate highway in Upstate New York. Technically this was true when I awoke this morning, however, a few weeks ago, the New York State Department of Transportation opened up the final six miles of US Route 15 south of Corning, linking the existing freeway in New York to the US 15 Freeway in Pennsylvania. Though I have made trips to the area on several occasions to see how construction was coming along, it wasn’t until today that I had the opportunity to drive the new route. When all is said and done, the US Route 15 designation will be removed and it will be known as Interstate 99. That’s still a ways off (Pennsylvania still has a lot to do), but nevertheless, my curiosity was getting the best of me so I made the trek down to Corning. 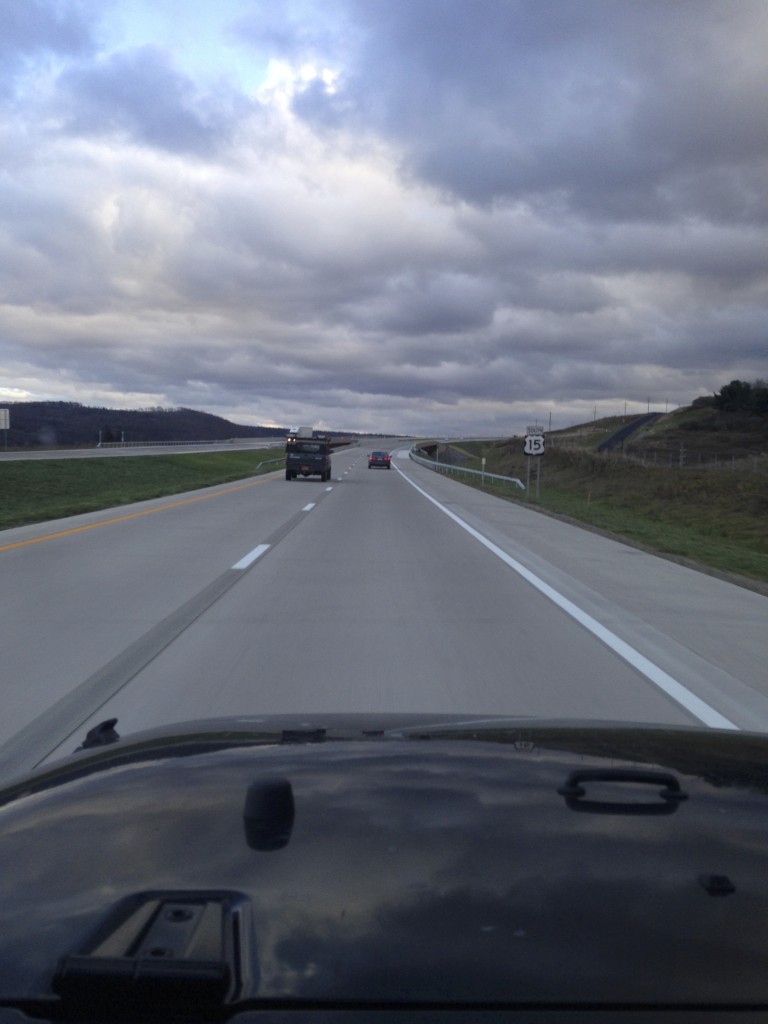 The final six miles of this route has some impressive scenery along the way and unfortunately my iPhone didn’t capture the moment as well as I would have liked it to. Once into Pennsylvania, I exited at the first interchange, did a U-turn and came back into the Empire State. 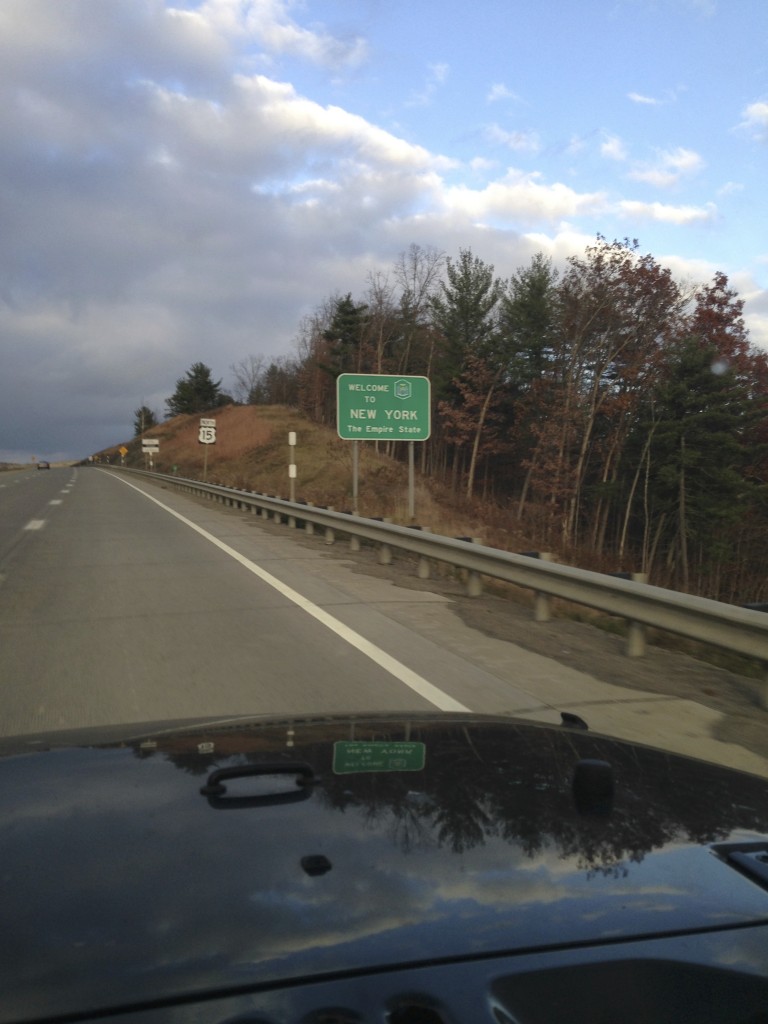 The new US Route 15 freeway doesn’t follow the valley like its predecessor did. If you enbiggen this photo and look closely, the roadway on the very right edge of the photo is the original US 15. 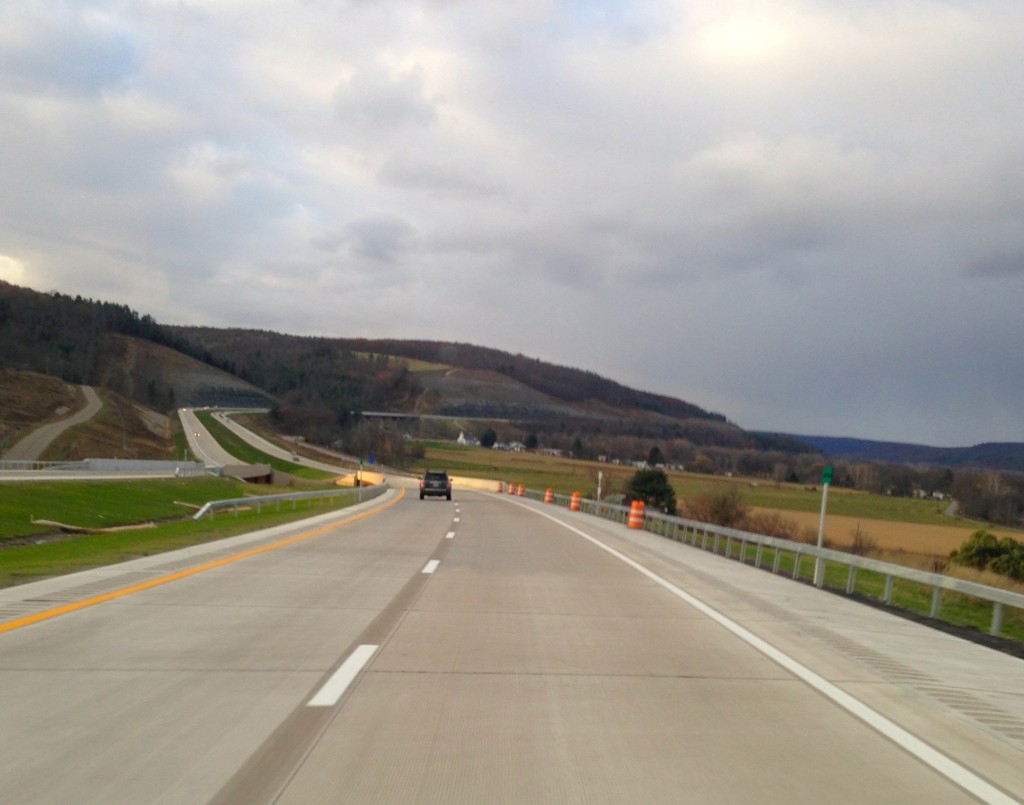 After getting back to Corning, I drove up the very quaint Market Street and then made my way over to Horseheads. From there it was my intention to go to Elmira, but I needed to make a quick stop and snap this photo when my eye caught this… 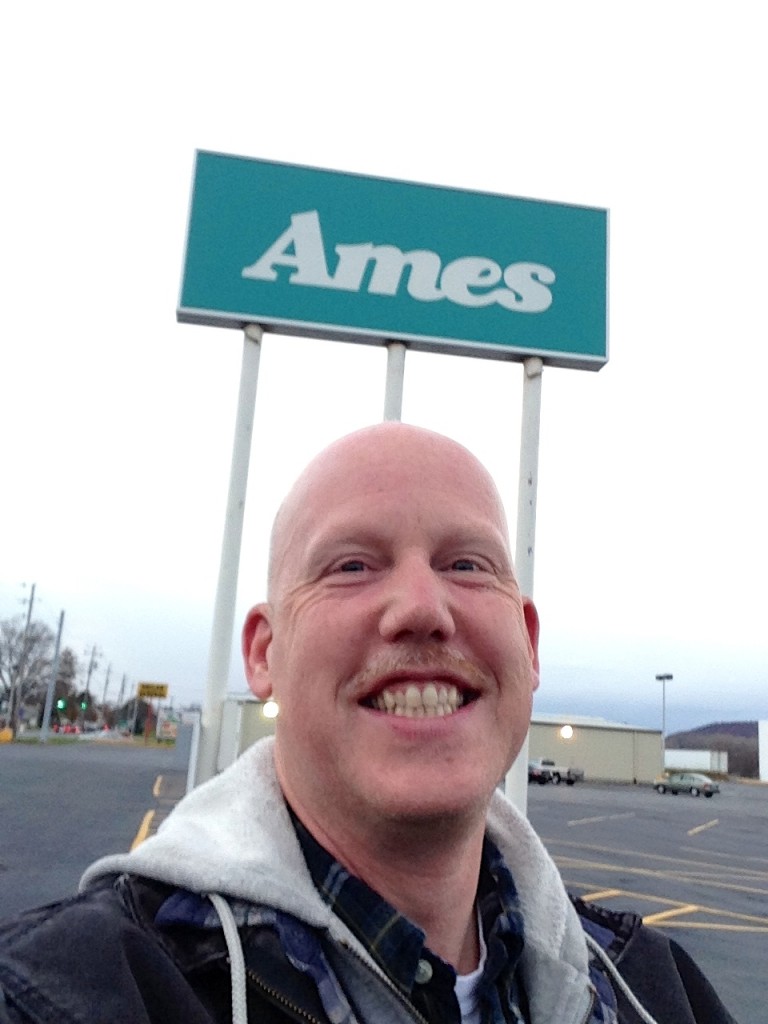 As an honest-to-goodness certified geek, it only took a quick glance at the old Ames store to deduce that at one time it was a Hills. (The green Ames sign gives that away too, actually). The sign on the store and the sign outside are still in remarkably good shape, despite the fact that the Ames chain went out of business a decade ago (and things in small town retail haven’t been the same since).

Even though it was then getting dark I still made my way to Elmira, where I intended to visit a barbershop I hadn’t been to in a number of years for a haircut and a barbershop shave. Even though it’s only been a week or so since my last barbershop shave (in San Clemente, California), I thought that since I was on an adventure I would indulge myself. I got to the shop, which has huge windows and noticed that it was busy and there was even a guy in the chair getting a shave. When I got to the door, however, the blinds were drawn and the door was locked, they apparently had enough customers to take them well beyond closing time and therefore I would not be able to enjoy this manly luxury.

Since it was after 5 p.m. I figured I should start the trek home, so I made my way along the Southern Tier Expressway to Apalachin (which isn’t pronounced the way you think it’s pronounced, by the way) and went to a favorite diner of ours, the Blue Dolphin. 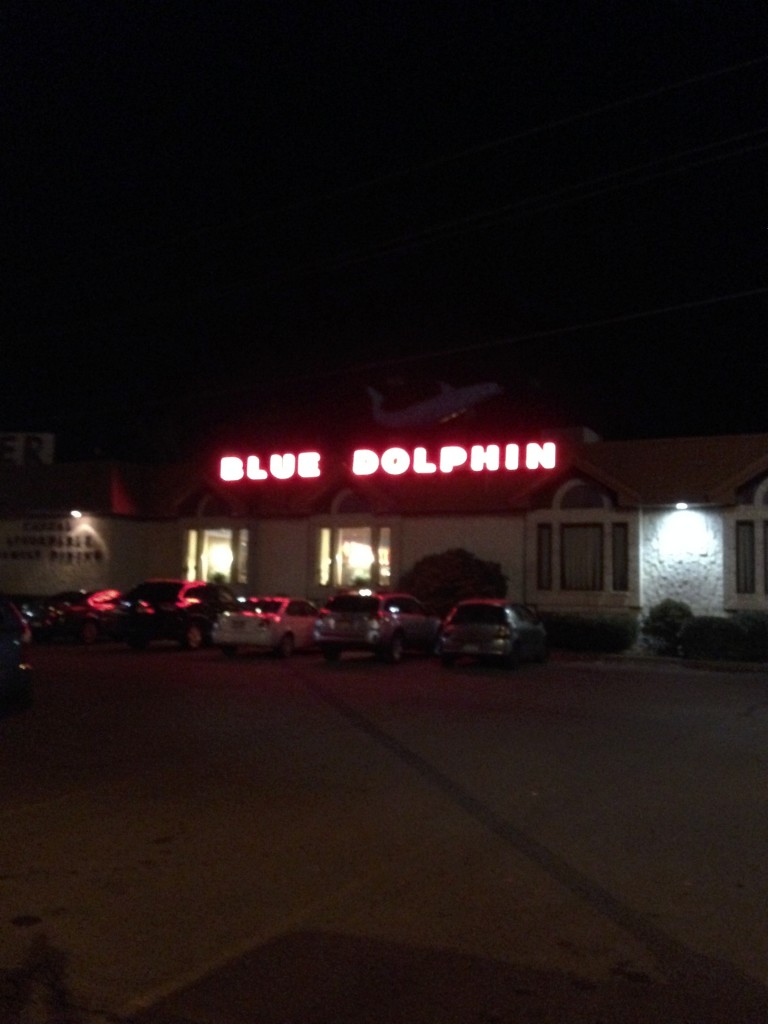 It was there that I enjoyed dinner for one in the corner of the restaurant that had other guys enjoying a dinner for one. The food was excellent and I had a nice conversation with my waitress, Sara (no “h”), where she told me about her busy day and her new tattoo (it was a word written in what I call “tattoo script” but it was in red and not in black or dark green. For the life of me I can’t remember what the word was but I know that it was spelled correctly.)

From the Blue Dolphin I made my way home. All told, I was on the road for 9 1/2 hours today, and I feel fantastic.

Many don’t understand why I would want to drive all over creation to look at a road, get a shave and eat at a diner, but the truth of the matter is, it’s very, very relaxing to me. This gives me a chance to people watch without people knowing who I am. The change of scenery is distracting enough that I don’t obsess about work or other little stressful things. Adventures like this make me feel much the same as I do when I’m riding my bike on a long-distance ride, I feel free. Honestly, I miss Earl terribly when I’m on these adventures, as he’s really the only one that could come along with me and I’d still enjoy myself to the same capacity, but aside from missing him today, I feel fantastic.

But my chin is still a little rough.