To make everyone’s life a little bit easier (including my own), I have added the ability for Blogger/Google Friend Connect users to use that account to leave a comment down in the comments section of individual entries. I’ll probably do the same for Facebook users in the very near future, like after I finish this blog entry.

Taking the day off from work has afforded me the opportunity to catch up on my online stuff that I have been neglecting. I feel energized again.

I’m not out to win any blogger popularity contests but I’m very much into using all the tools I can to make everyone’s social networking experience that much more enjoyable. Sit back and enjoy the ride.

It was a while back, August of ’09 to be vaguely exact, that I declared that I would never drink again. This declaration seemed to rattle some people but it was something that I felt I needed to do. Many would ask why I had given up drinking any alcohol and I was always honest with them: “I enjoyed getting buzzed and I foolishly tried to drive a fairly expensive sports car (the RSX) while buzzed.” Curious that I never drove the Jeep whilst buzzed. Anyway, I have never been stopped for drinking and I have never had a “close call” but I fully recognize that my daring act was stupid (to put it mildly) and therefore I needed to stop doing what was prompting me to be stupid. I’m not a stupid person, why should I act so stupidly? On the couple of occasions that I have had a beer since this declaration, Earl or Jamie has been the designated driver and I haven’t tried to drive the Acura whilst buzzed. However, the couple of times that I have drank alcohol since my declaration, I made the realization that whilst a buzz feels good (I once remarked that it quiets down the noise in my head), I don’t really miss getting buzzed at all but I do miss the taste of beer.

I like beer. I like the taste of beer. I like holding a beer bottle at a summer barbecue or at a street party or, on the very rare occasion that I go to a bar these days, at a bar. I like sitting in a pub, eating bar food and drinking beer. I like hanging with the crowd and kicking back with beer. I like all that. However, I don’t particularly enjoy the buzz anymore, but I do miss the occasion and good times that I associate with drinking beer.

So I’m on the hunt for a good NA (non-alcoholic) beer. I have tried a few, mostly while in Toronto earlier this year and quite frankly I think the Canadians could do better in that department, and I have to say that the look I got when I asked for a NA beer was a little disconcerting. This could be my own hang up, because while I mention that most ask why I stopped drinking, some folks got downright surly at the fact that I would not be getting drunk with them. Looks of shock and disbelief would pepper the conversation at a family gathering or at a holiday party or what have you but in those circumstances I just got obstinate, dug my heels into the floor and refused any alcohol although frankly I would really have enjoyed a beer because of my liking for the taste. When one tells me that I should do something contrary to what I want to do, I’m sure as hell going to do exactly what I want to do and not budge on it. And I’ll probably be a bit cranky about it.

So if anyone can recommend a good NA beer, I would love to hear from you. As we march through “the most wonderful time of the year” (with the craptastic music blaring to remind us that it’s just what they declare it to be and we MUST be happy about it), I will not be drinking any alcohol whatsoever, including wine, egg nog (which I find to be disgusting), champagne or some girly drink like a mai-tai, a foo foo or a chocolate martini with Ready-Whip on top. And for the record, I like making love at midnight and I like getting caught in the rain but I do not like pina coladas.

Near Beer. Tell me what to get.

**For the record, I have no issues with those that want to get drunk responsibly, in fact I’ll help out with the driving. And if you want to use whip-cream at a bar, go for it. Just let me watch. 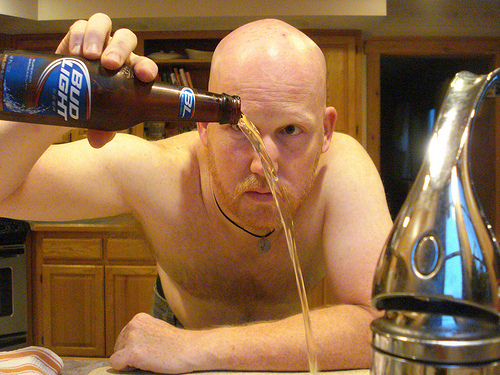