So yesterday Earl and I went for one of our long rides. It’s been a couple of years since we’ve piled in the Jeep with the necessary accoutrement and hit the open road, but the weather was beautiful, the leaves were at peak and as I said before, it’s just been too long.

Selecting a route is a little bit of a trick proposition for a couple of reasons: I drive due east everyday for work and Earl drives in every direction every day for work. So we agreed that we would drive the back roads and ignore the freeways unless we got to a boring part where we had to fast forward.

First stop was in the City of Oneida, about a half hour west of us. I wanted to stop in Oneida to snap a photo of this… 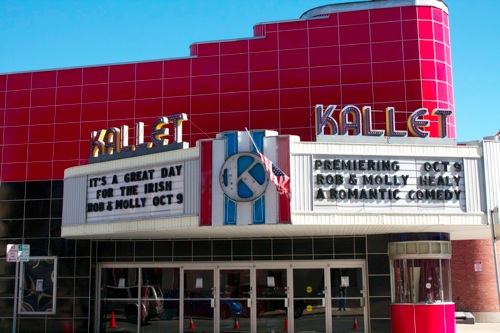 I don’t know who Rob and Molly Healy are but I wish nothing but the best for them as they began their journey yesterday. Actually, the reason I wanted to snap a photo of this theatre is because in my hometown of Pulaski, New York there is another Kallet Theatre that is about the same age as this one. (Pulaski’s was built in 1935, this one was built in 1937) Kallet Theatres had a modern presence in this neck of the woods back in the day and it’s good to see this one restored to it’s former glory. The Kallet Theatre in Pulaski closed in 1982, was restored once in the late 80s and then was sold to an auto parts store where it became an auto parts store! Such a shame. I shudder to think what the inside of the theatre looks like today. Rumor has it that someone is going to buy it and restore it. If I had the money, I’d do it myself.

I found this old picture of the Pulaski Kallet Theatre on the tubes.

We then made our way across Central and Western New York on NY Route 31, which roughly follows the Erie Canal across the state. Our next stop was the B’ville Diner in Baldwinsville, New York, which is really close to some family we didn’t see because we were on a mission. I was going to take a picture of the diner but to good a good shot you have to stand in the middle of the street.

We continued the trek west until we got to the outskirts of Rochester, where we made a necessary stop at the Eastview Mall. They have lovely bathrooms and more importantly, an Apple store. The MacBook Pro needed a new battery and the iPad needed a better case so in we went, where we posted for a photo on one of the display 13-inch MacBook Pros. 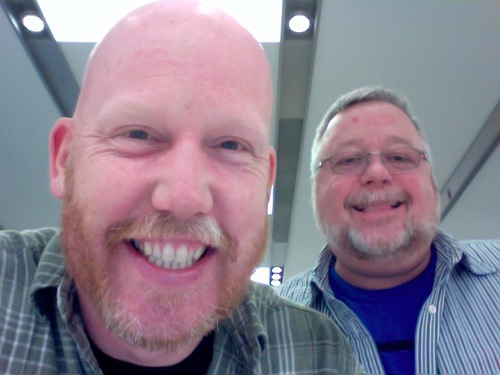 The MacBook Pro works much better when it has a viable battery, by the way.

We tried to follow NY Route 31 all the way across Rochester, but there are signs missing in the downtown area and we got off the path a little bit, but it was quickly realised and we were back on track and heading west. Our next stop was Medina. We wanted to see this little canal village for various reasons. The downtown is trying to make a comeback and it looks like they’re making good strides. The center of downtown Medina is 43.2 miles from Downtown Buffalo and 43.1 miles from Downtown Rochester, in case you were wondering.

While on the outskirts of Medina we decided we wanted to do a little more shopping. 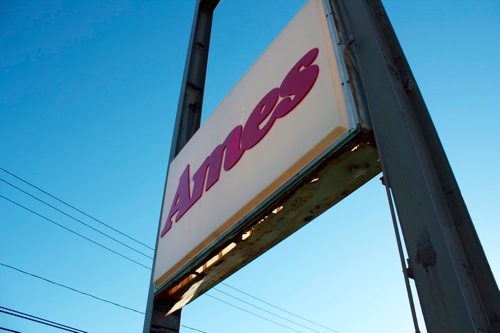 Unfortunately Ames closed in 2002 and there is plenty of evidence that it is missed in Upstate New York, because there are closed Ames stores (or Ameses as Grandma City called it) in many small towns up here. Usually the closed Ames is the anchor to a shopping center that is completely closed as well. So sad. Wal*mart came in and couldn’t be bothered to use up existing land, they needed to move further out and disrupt more of the countryside. Bleh.

From Medina we continued on Route 31 to Lockport where we finally made our way into Buffalo. We met up with Jamie and friends for a few moments (he’s in Buffalo for the weekend) and then did some exploring around the waterfront and downtown areas. It was getting dark so I wasn’t able to take any quality shots, but it’s amazing what Buffalo is trying to do by taking some of the abandoned warehouse buildings and turning them into lofts. There are also some good attempts and making the waterfront more attractive to people and less industrial like and I think that’s a great thing.

From Buffalo we drove through Lackawanna and down towards the small village of Springville before heading back across NY Route 39, which is my second-favorite route to drive next to NY Route 177, simply because it goes through open meadows, relatively flat land and lots of farm land before bringing us back into the Finger Lakes. By now it was 9:00 p.m. and our gut decided one more meal wouldn’t be a bad thing, so it was a quick stop at the Denny’s in Canandaigua before heading home across 5 & 20 to Syracuse and then to The Manor.

All in all it was a great day. Earl and I have had an adventure like this in a long while and it’s a grand feeling to know that the two of us after all these years enjoy each others company, laugh about silly things, discuss our bright future together and still find comfort in each others presence.