Earl, Jamie and I took the long way home from Natick, Mass. today. I did what is known as “shunpiking”. I avoided all toll roads at all costs. Fortunately, this makes for a beautiful drive through the Berkshires and along the less-traveled roads of Upstate New York.

If you have an extra hour to spare, I highly recommend taking Route 2 west from Boston all the way into New York State. It’s pretty much a freeway or expressway 1/2 way across Massachusetts but it’s not as boring as the Mass. Pike and you pass through some lovely old industrial villages. West of Greenfield Route 2 is two-lane all the way to Troy, N.Y. as it winds and climbs it’s way through the Berkshires. Just east of North Adams, Mass. is the relatively famous hairpin turn. Off the end of the curve is a family restaurant. Earl and I have eaten there before. The food is good.

Once you make your way through North Adams and Williamstown, Mass., Route 2 crosses into New York State and makes it way down from the Berkshires into Troy. It ends shortly afterwards at Interstate 87.

After a bit more shopping at the surprisingly uncrowded Crossgates Mall, we continued our trek home by avoiding toll roads. The route of choice was one of the longest highways in the United States: US Route 20. 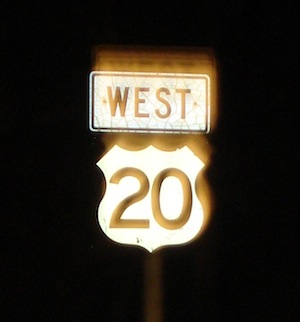 “Route 20” as it’s known upstate, has a decidedly “Route 66” feel to it in that you can tell it used to be a really important road as it crossed Upstate New York with the diners, nostalgic looking motels and villages with grandly built houses flanking the road. Like many of the state routes in New York, it has wide shoulders and a decidedly “open” feel to it as it makes it way over rolling hills and through some valleys between Albany and our point of departure, Bridgewater.

I have said for many years that I want to accomplish a “grand bike ride” before I’m unable to. I have had dreams of riding across The Empire State on a week long bike ride. I have toyed with riding the southern part by following former NY Route 17, but I think I’m going to pay homage to my Central New York roots instead of ride US Route 20 from the Pennsylvania Line to the Massachusetts Line some time during 2010. The ride today motivated me.

It’s always odd that I find the inspiration and desire to ride my bicycle around the first snowfall. Nevertheless, I’m recording this idea of riding Route 20 here in the blog so the motivation continues and I can mark it off my list of to-do items next summer.