At work today, Laurie, our Assistant News Director at the radio station, told me that Tuesday the 13th in Spanish has the same superstitious properties as Friday the 13th in English. So I shouldn’t speak Spanish today. I wasn’t planning on speaking Spanish, since I don’t speak the language, but what the hey. Olé. I believe she’s as erratic as I am. She’s a good egg.

Earl and I just got back from Pier One. We’re working on sprucing up our dining room a bit, and we bought a nice wine rack for it. I’ve also purchased bunch of plants for the bay window and they’re coming along nicely.

Just got done watching Dharma and Greg. I have a renewed interest in that show. I’m loving it. The relationship is very much like Bewitched, my favorite show of all time. Add a bit of witchcraft and you’ve basically got Bewitched. That would be a cool dream sequence or something.

Speaking of which, I’m taping Bewitched again. We have one of those TiVo units with our DirecTV, so we can tape up to 35 hours of programming on this bugger, and it can be programmed to tape every Bewitched that comes on, which is way cool, so I’ve been kicking back watching Bewitched after work. Very relaxing.

I finally remembered the name of the tea I was enjoying so at work. It’s “Tension Tamer” from Celestal Seasonings. Very nice. I’ve been reading a bunch about herbs, and so I’ve been taking some herbal supplements that seem to be doing wonders for my mood and general overall well-being. I checked my blood pressure today and it’s the lowest it’s been in years. There’s something to be said for herbal vs. western “traditional” medicine. I’ve been drinking lots of herbal tea too, I think that might have something to do with my feeling better, rather than getting bogged down with soda, save for my one Pepsi Twist a day. 🙂 I drank so much water and tea today I thought I was going to float away!

I can’t believe another airliner went down this week. Those poor people both on the plane (obviously) and in the Rockaways. Our thoughts and prayers are with them and their families.

I’m not big on flying commercial flights as it is, and now it’s definitely car rides only if we’re going anywhere. Speaking of which, we’ve already made our reservations for New Year’s Eve. We’re spending New Years Eve 2001 in Philadelphia. We’re celebrating five years of marital bliss at the same time, basically at the scene of the crime. 🙂 I can’t wait!

I’ve been thinking about Christmas which is just around the corner. I love the Christmas holiday so much. I think we’re going to go a bit “old-fashioned” on the outside decorations and use the big lights and keep it simple. I don’t like things that blink and sway and look like a big neon-light. Simple is better.

Not much more going on – life is plugging along as usual.

As you can see, I have an editor keeping track of everything on the journal again. 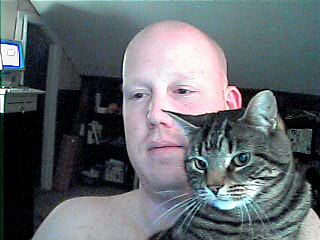