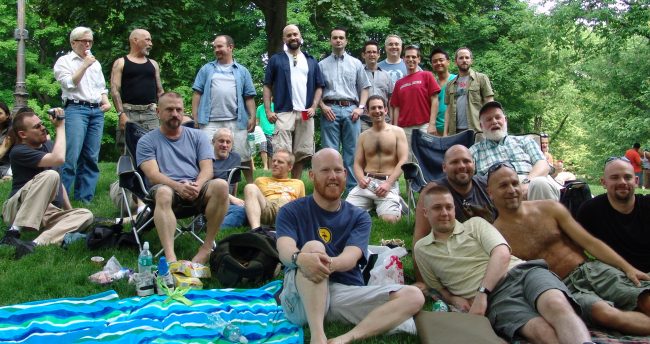 It was 11 years ago this weekend that Earl and I decided to head down to New York City and join up with other bloggers for “GB:NYC4”, or “Gay Bloggers:New York City 4”. Before the days of Twitter, with Facebook confined to college campuses at the time and with MySpace trying to gain traction, folks were writing personal and professional blogs and sharing their thoughts through the medium on the Internet. This was before we got in the habit of communicating in 280 characters or less and it was before we tried to reduce our thoughts down to dancing, leaping, and squirming emojis. Back then an emoji looked like this: 🙂

I still use 🙂 and nothing more. I am not an emoji kind of guy.

Going through my photos of the event and remembering the nice time we had with this great group of people back in 2007 made me miss the days when I was sit down and actually write something of substance on this blog. It was back before Obama, so I would wretch on W from time to time, but I liked to think that I had a fairly breezy attitude toward life. Of course, I was 11 years under (38 at the time), the country wasn’t being smothered by this plague called Trump (he was just a nuisance trying to grab airtime any way he could), and the future still felt like it could be brighter. We were still a month away from the dawn of a smartphone in every hand. People were flipping open their phones, plunking messages on a physical keyboard, and taking photos with cameras.

Are we any better off today?

I’m still friends with a few of the folks shown in the picture and I try to follow along with the few bloggers that still update their blogs (JoeMyGod being an exception to the blog abandonment trend, of course, because he still blogs a lot and he does a nifty job at it). As much as I wretch about Facebook, it’s become nearly an indispensable way to maintain contact with those in other parts of the world.

It’s a shame that decently composed discussion has given way to the burps and bleeps of today’s Internet experience.

Seeing these pictures and remembering what life was like just a little over a decade ago has helped me smile a bit more this weekend. It’s also inspired me to try to blog more; I’ve been lazy in the month of May. I think my 30-day personal challenge for June will be to blog something of substance at least once a day.

Who knows, maybe my efforts will catch on and someday we’ll get back to speaking in complete sentences without crazy emojis jumping off the page.