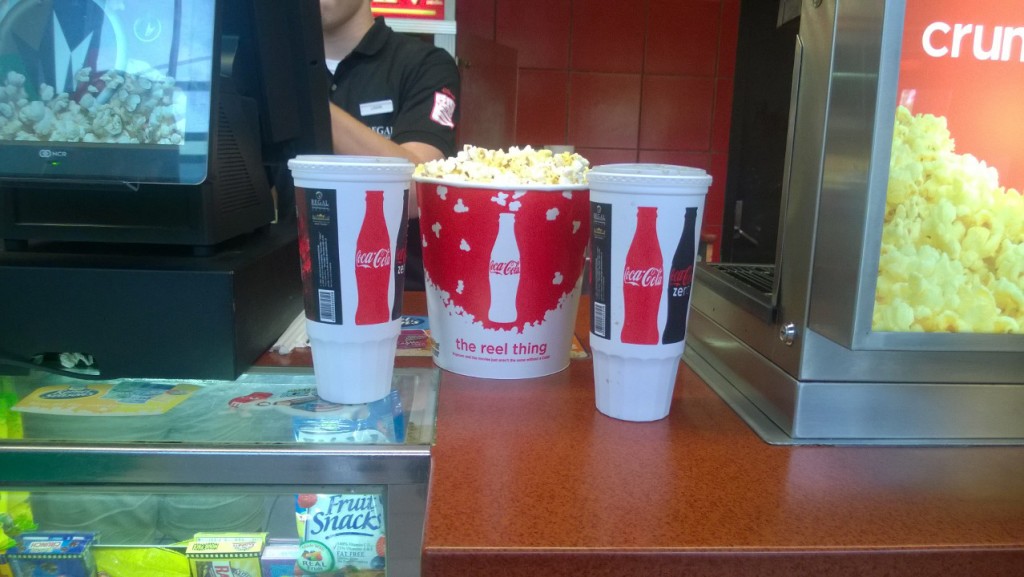 Image courtesy of a Google search leading to this blog, “My Midlife Crisis Is Orange”.

Remember the days when ordering a large drink from the movie theatre meant you were getting a 24 ounce cup of something? The sizes were 12, 16 and 24 ounces. The large seemed a little excessive but going to the movies was a treat and sometimes you wanted to accompany your treat with another treat.

Last night Earl and I went to see “The Intern”. We had both been wanting to see this movie as from the trailer it seemed rather light with just the right amount of introspection, the story seemed interesting and it had an excellent cast. Quick summary, we both enjoyed the movie very much.

Before entering the theatre we stopped at the concession stand to order the compulsory snacks for the event. Popcorn is my favorite food, so I ordered a large (but no butter) and a large Coke Zero.

I was presented with a tub of popcorn (a bigger tub than normal) and 54 OUNCES of Coke Zero. I’m no rocket scientist, but I’m pretty sure that the elixir of badness in Coke Zero should not be consumed in amounts greater than 16 ounces, let alone 54 ounces.

That tub of Coke Zero was just 10 ounces shy of two QUARTS of liquid. That’s 1.6 liters! 1.6 liters! I was handed 54 ounces of caffeinated diet brew with a plastic lid and a straw.

On the bright side, it fit in the cup holder in the theatre.

Because the vat was already filled before I realized the size of the drink I had just ordered, I used our line of credit to pay for this huge drink and popcorn and I lugged everything to the theatre. The barrel of pop fit in the cup holder, I arranged for my popcorn to have its own seat.

Earl looked at me like I was nuts because, well, I am nuts.

So we enjoyed the movie but I felt guilty for wasting about two-thirds of the popcorn, about three-quarters of the Coke Zero and the line of credit arranged for the payment of such waste. As a good citizen I carried my garbage out of the theatre and when I dropped it into the bin, the garbage can shuttered and there was a loud thud.

We all know that I am occasionally insane, but who in their right mind needs 54 ounces of any sort of snack beverage, especially since many probably order the full strength, sugar laden version of Coke.

Maybe I should just sneak in my own bottle of water.