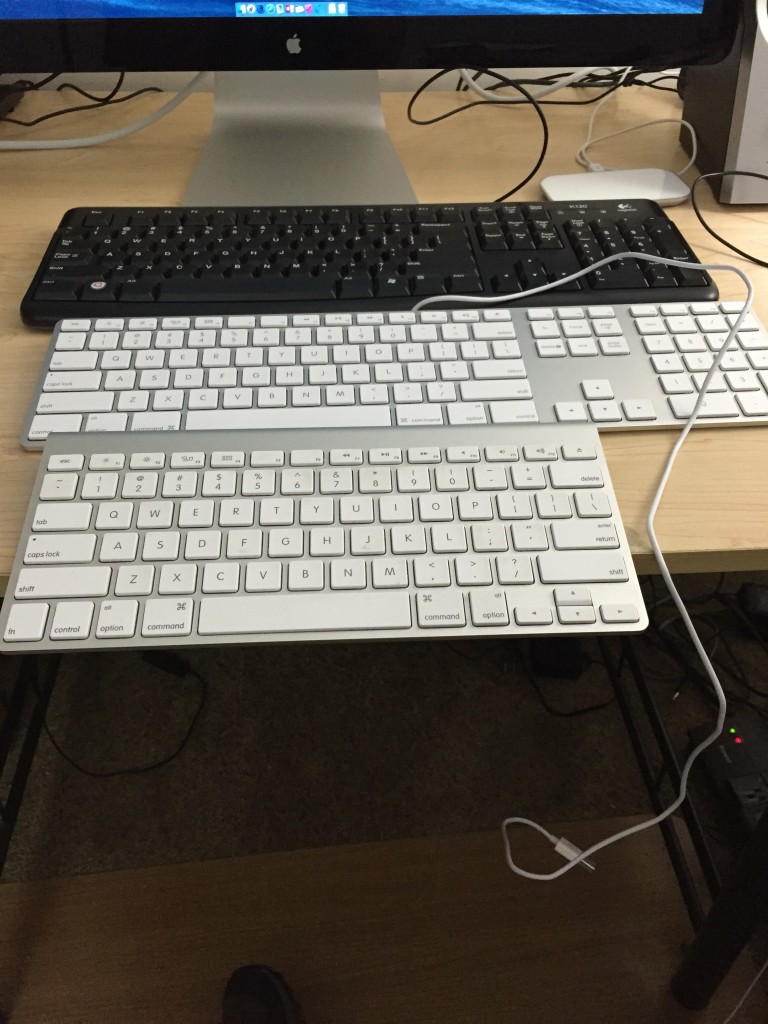 So today at work I blazed through an entire workday of writing code and doing magical things with databases. I’m writing a web application that is going to greatly enhance the work lives of the members of our team; at least, that is my goal and why I’m getting paid the big bucks. I found that I have a certain style when designing an application and luckily that style seems to be user friendly. I have yet to receive any serious complaints about the applications I design

My new company provided me with a 27-inch Apple Thunderbolt display to pair up with the provided 13-inch MacBook Pro Retina (something I negotiated when accepting the position). I didn’t think that the 27-inch display would make that much of a difference when compared to the 24-inch display I had from my old company, but I was wrong. Though my workflow is similar to my previous job, I feel like I have a whole lot more room in those extra three diagonal inches in the monitor.

As I was headed back to work after lunch I noticed in that in the corner of our “tool room” was a cheap Logitech keyboard that used to be attached to one of the Linux servers in our basement, because after all, every home needs a basement with multiple Linux servers. I remembered typing on that keyboard and enjoying the experience, so I decided to hook it up to my work Mac setup and give it a whirl for coding this afternoon.

It enhanced my typing experience.

Now, I type on a computer keyboard for a living. I type on computer keyboards for fun. While I love my Macs, I can’t say that I’m a huge fan of the keyboards they build into their MacBooks and the external keyboards they provide. Truth be told, my favorite keyboard is the old IBM Model M. Apple is all about making everything as thin as possible, and the key travel has been shrinking over the years. The last time I was in an Apple store I tried out the newest design of keyboards built into the new MacBooks and I have to say I wasn’t impressed. It may be because I grew up on computers built in the 1980s, but I want a keyboard that’s going to click and clack and I want the keys to travel down to a stop with a satisfying thunk. I want to feel my letters as they appear on the screen.

I’m rather heavy handed with my typing.

When I type in front of someone for the first time, there’s a chance that I’ll receive a comment about how fast I type. I’ve tested as high as 115-120 words per minute, though I don’t think I type that fast anymore, because after all, I’m not as young and spry as I used to be. I have my mother to thank for my typing speed; when I was eight or so years old I was goofing around with her old Royal manual typewriter and she told me that if I was going to play around with a typewriter, I was going to use the correct fingers so she taught me how to type while I was still in elementary school. By fifth or sixth grade I could type faster than the secretary in the principal’s office (when armed with an electric typewriter). By all accounts I should have probably become a professional secretary of the male persuasion, but I don’t think I would have enjoyed bouncing on the boss’ knee.

I think I’ve gone off on a tangent.

Back to keyboards in today’s world. I’m not a fan of what the tech companies are offering as standard equipment today. The cheap Logitech keyboard I started using today gives a pleasant but not excellent experience. I like the travel of the keys, there is some satisfaction in the clunk and I confirmed with one of the online typing tests that I can type faster on that than I can on a standard issue Mac keyboard, but I’m still feeling a little restless about the whole keyboard experience.

I think I’m going to purchase one of these: the Das Keyboard 4 Professional for Mac. I’ve read some positive reviews from some keyboard snobs such as myself and I feel encouraged, but for that kind of cash I think I need to do a little more research.

If any of my gentle readers have used such a beast as the Das Keyboard for Mac, or have another keyboard they would recommend based on my blathering above, I would love to hear from you in the comments.

In the meanwhile, type on, fellow typists and remember to bounce gently on the knee.