I have mentioned this before in the past and there’s a link at the top of my blog that leads to further information on my interest in the subject, but I got my start in computers in the retail realm. While I had a passing interest in the cash registers I saw as a youngster at the grocery store and at Kmart and Sears, I wasn’t really intrigued with how they worked until the opening of the Ames Department Store in my hometown. If memory serves correctly, the store opened in 1977. I remember going during the grand opening and purchasing a red and blue toy airplane. Besides the excitement of buying the airplane, I was quite fascinated with the cash registers they were using at Ames. They looked like the cash register used at the little grocery store in town, but with many more buttons and some extra pieces on the side. Even at nine years old, I noticed the difference.

It turns out that the cash registers at Ames were the first generation of computerized cash registers. I use the term “computerized” loosely, because the machines were entirely mechanical. There were no electronics anywhere in the guts of these cash registers. However, the extra buttons and the additional mechanism I observed were actually used to punch a computer tape. In later years I found out that these tapes were removed on a regular basis and sent somewhere official where they were fed into an IBM (presumably) mainframe computer. Hence, computerized inventory.  All of the items at Ames were marked with a department number; some items also had a three digit SKU number as well. Cashiers could fly along punching in these extra numbers and the store executives were assumedly happy with the inventory information they were receiving.

Legacy technology like this fascinates me. Yes, it took a little longer to get through the checkouts in those days, but to think that all the mechanics in those cash registers could do so many different functions is incredible to me. Unfortunately, while there are many of the grocery store models of these cash registers out and about just waiting to be restored and cherished, I haven’t seen an inventory control model in many years, aside from one picture taken in a landfill, at least until a fellow restorer sent me an eBay listing. 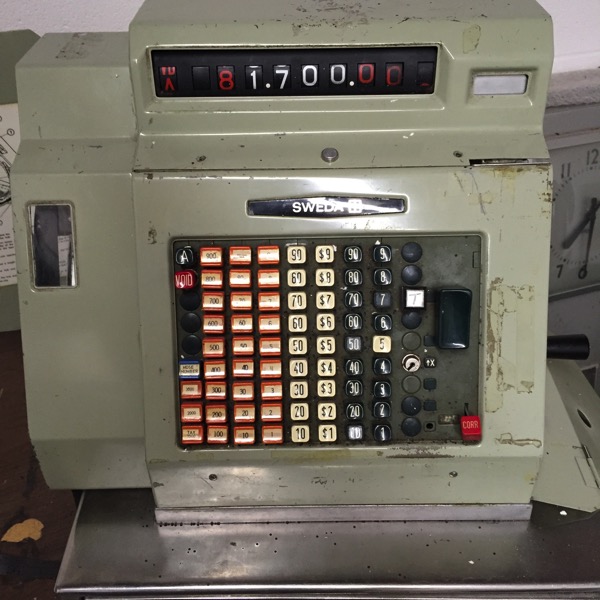 Aside from the three lower buttons in the very left hand column, this cash register is identical to what I remember from Ames in 1977. The owner warned me that it needs a lot of work; he couldn’t get the drawer opened and the motor just buzzes.

Last night I started taking the register apart and figuring out what I had gotten myself into. The cash drawer is now working. I didn’t expect to find any money inside, and I didn’t, but I did find a receipt that indicates where this cash register came from. This register was last used in May 1986 in an Alco Discount Store.  I had never heard of Alco until that moment, a quick Google search showed that they are in the process of going out of business. They’re a discount department store chain some in the midwestern United States.

Getting this cash register working again is going to be a project that I am looking forward to. While the wind is still whipping and the Arctic winds keep blasting our area, it’s good to step away from technology and just tinker around a little bit. Doing so let’s my mind wander a little bit and I find it relaxing.

I’m looking forward to getting this working someday. It’s my way of preserving some of our early computerized heritage.