I am just getting around to blogging this but you have probably heard the uproar about some of the performances at least week’s Grammy Awards; more specifically the pairing of Taylor Swift and Stevie Nicks. 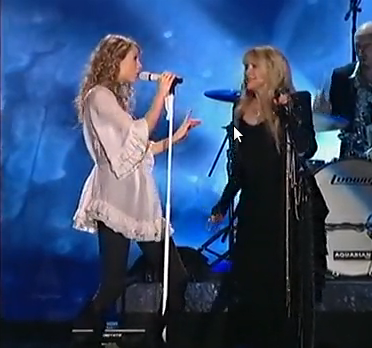 Stevie Nicks looks as if to be saying ‘What The Fuck Was That?’

Here’s the thing. I don’t know much about Taylor Swift. I know that Kanye West came out during her moment to shine at the Video Music Awards a while back and I’ve read that she’s a really sweet woman who writes beautiful country songs. I have heard her on the radio once or twice and found it odd to hear the use of auto-tune on a country song (though it’s becoming too common these days), but I had never heard her sing live.

I’ll preface this by saying I couldn’t do better and I know that. But I’m not paid millions of dollars to sing in front of people nor am I winning Grammy awards. Taylor should have never, ever sang “Rhiannon” with Steve Nicks. There was some really bad karaoke vibes going on during that live performance. Stevie looked mortified a couple of times.

Reports say that Taylor’s earpiece was malfunctioning and she couldn’t hear herself. I have issue with this. First of all, not being able to hear yourself because of an earpiece isn’t working is like saying you can’t hear yourself talk if you’re not wearing headphones. Secondly, though they try to convince us to the contrary, the instruments and the singers on stage are actually making noise outside of what is being piped through the headphones and honestly, I’m sure there were some Really Big Speakers pointed at the audience and I’m also certain that there were speakers pointed at the musicians on-stage. If the earpiece wasn’t working she could have simply taken it out. Thirdly, as a person that sings from time to time and actually went to school to teach others how to do it, I can attest that when you sing you know what each note feels like in your throat. It’s an instinct thing – you know when you’re on key or not, especially if you’re a singer that is considered to be award-winning. You just know it and you hear it. Yes, the earpiece will help you hear things better and possibly hear the backing singers on the other side of a Really Big Stage but you can still hear your own voice in your own head without needing to rely on technology.

I have read that this isn’t the first time that Taylor Swift has been less than impressive in a live performance. This is unfortunate because it seems like she’s a really nice person and she writes really good songs and she is a positive influence in an increasingly wonky world, but for the love of the gods, if you’re going to win awards for singing, then please be able to sing in key.

And Stevie, you dear goddess, what the hell were you thinking when you agreed to do this?