It’s the MOST… Wonderful time of the year. And indeed it is. The festive spirit has finally hit me, especially with the return of winter weather. And the national weather service says we’re just going to keep on enjoying that winter weather for a while to come. Yippee!

Well we had a wonderful time at my father’s Christmas party. We had the opportunity to meet his new girlfriend, Karen, and her son, Colin. Both very nice people. I get a sense of ‘future’ with my dad and Karen, like there’s possibilities there. I’m happy that they’ve found each other.

It was fun hanging out with about half my cousins and their families. My aunt and godmother, who is being treated for breast cancer, seems to be doing well. She’s undergoing radiation five days a week for the next six weeks or so. God bless her, she is so strong. I found an old picture of us in my photo album this weekend while I was cleaning that I’d like to share. It was taken in 1988 when I lived in Boxborough, Mass. My Aunt Marg is on the left, my mom on the right. And I had lots of hair! 🙂 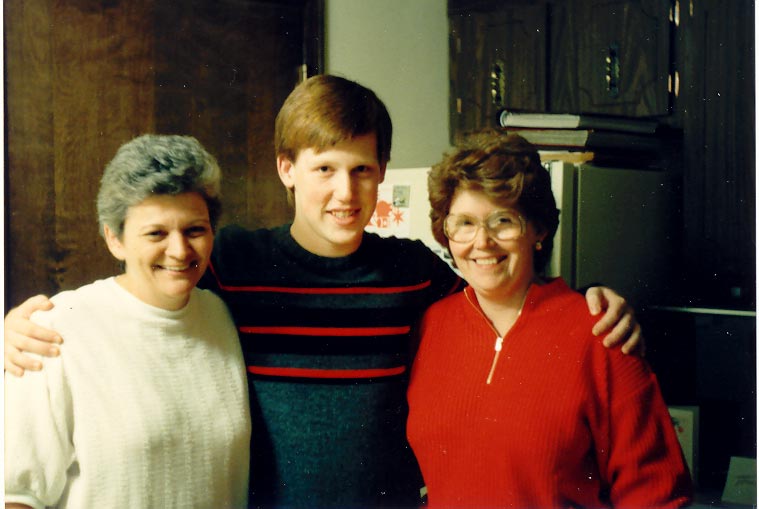 Yesterday (Sunday), I finished up Earl’s Christmas shopping, which was fun. The mall was jammed packed, but it didn’t bother me a bit. I’ve been feeling a little more confident lately. I feel pretty good about what I got Earl this year, I think he’s going to be pleasantly surprised.

He gave US one of our Christmas presents this year. Yesterday afternoon I was trying to resurrect one of the scanners we had and it was just being a bugger. So he pulled out one of the presents – a new HP scanjet 4400C. This scanner is sweet, I’m very excited about it. (As you can tell from the picture I scanned in above.)

Tonight we watched last week’s “Dharma and Greg” from TiVo and also “The King of Queens”. I think Kevin James is rather cute. He reminds me of Earl. It’s not a bad show, I enjoy it more than “Everybody Loves Raymond.” We also watched Ellen with Mary Tyler Moore, nice touch to the show, but the humor seems rather forced in it. I’ve always been a big Ellen DeGeneres fan, but this series seems a little too formula for my tastes. We’ll see how it goes.

If you haven’t cruised around the site in a bit, you’ve missed my first attempt at creative writing. It’s in the section called “Ponderings”. Since I suck at stand up humor (because I stammer and get my words mixed up sometimes), I decided to write about various things. Sort of like the gay male Erma Bombeck. She’s probably rolling around in her grave by that statement, but one side of me thinks she wouldn’t have minded. It’s funny, but somehow I know that I wasn’t her intended audience but boy do I enjoy her books. I miss her newspaper column “At Wit’s End”.