I love airports, day or night. And I really like the color of the taxiway lights (the blue ones).

I’ve mentioned before that I am a third generation private pilot. Both Grandpa Country and my Dad were private pilots, and I can vividly remember my first flight with the both of them. It was at a very young age, I sat in the backseat of a Cessna 172 while Grandpa was in the left seat and Dad was in the right seat. He had not began his private pilot lessons yet. I always remember this all occurring at age four. I was wearing a checkered patterned shirt and I remember getting sick during the flight, the only time I’ve ever gotten sick in an airplane. Dad and Grandpa cleaned up the airplane but brought me home to Mom and Grandma Country to be cleaned up. Aside from the vomit, I remember enjoying that flight. I flew with my Grandfather a couple of times since then, but did most of my flying with Dad after he got his Private Pilot’s certificate. After they both passed it was up to me to get my certificate to fly if I wanted to keep on flying, which I did.

Today I earned my Instrument Rating as a private pilot. This is one step beyond the basic Private Pilot’s Certificate, and I have proven my skills at successfully planning, flying, and navigating through IMC, or Instrument Meteorological Conditions. I can fly in the clouds now. I started training for this rating when we lived in Upstate New York but didn’t get to finish it before we moved to Chicago. General Aviation in Chicago proved to be a bigger hit on the budget than original anticipated, so it wasn’t until we moved to Tucson that I was able to resume this training. There’s three parts to the certification: a written exam (I passed in June), an oral discussion/exam, and a proficiency checkride. The latter two happen on the same day unless something happens with the weather during the oral discussion and then you can defer the flight to another date, but otherwise you do both on the same day. I took the day off from work.

I’ve been studying like crazy for the past several weeks, and on Wednesday I flew with a different instructor to make sure I was ready for what today’s adventure would entail. I walked away from the flight on Wednesday feeling good about things. I contacted the FAA Designated Examiner on Thursday and he had me plan a flight from Tucson to El Paso, Texas, which would be the basis of our discussion. As I was finishing up my flight plan last night, I noticed a NOTAM, or a Notice To AirMen (actually now Notice To Air Mission) that the main runway and the instrument landing system at my home airport would be closed. All of the approaches I had practiced for the checkride were no longer available.

When meeting with the examiner, he suggested we try approaches at nearby Tucson Airport. I’d never flown these approaches before, my instructor had a look of surprise on his face, especially when I said, “OK, let’s go ahead and do that instead”. It took a few moments of discussion with the examiner to build the scenario and then he said something to me that struck a chord, “you’re not going to be flying the same approaches every flight”. So instead of using muscle memory and acquired skills through repetition, I’d be flying like an airline pilot onto the main runways. Tucson Air Traffic Control normally doesn’t allow general aviation pilots to practice approaches to the main runway, but I told them I was on my FAA Checkride and they sequenced me in between Boeing 737s and Airbuses as I made my way down the approaches to minimums. Overall the flight went very well, I received my “satisfactory” blessing from the FAA Designated Pilot Examiner (who was very, very pleasant to fly with) and I am now an Instrument Rated pilot.

I am going to continue my aviation training and career and will be starting my Commercial Rating training in a couple of weeks. I’m looking forward to the challenges, and I have a feeling the two previous pilots in the family are smiling down as I progress through this adventure.

It’s well beyond monsoon season but another Nature continues to be in a stormy mood.

While out for my walk yesterday afternoon I noticed more air traffic than usual overhead. A little digging into Twitter and it turns out Phoenix has being hit with 50+ MPH winds and an impressive sandstorm, so inbound flights to Sky Harbor were in holding patterns over Tucson. This ties in well with my instrument training currently in progress as I’ve been practicing these types of holds in much smaller airplanes.

Here’s one of the tracks of holding airliners overhead during the sandstorm.

It looks like this pilot wanted to do their own thing, though.

I enjoy storms, as long as I’m not flying in them.

Early flights are beautiful here in the desert. Here’s a picture of the Cessna 172 I flew this morning. The photo was taken right at sunrise here in southern Arizona.

This time of day is particularly business for General Aviation aircraft here in the desert. By the time the sun heats the desert later in the day, it becomes quite bumpy and there’s increased chance of thunderstorms this time of year. The morning provided for a smooth flight.

It was quite enjoyable.

I canceled tonight’s flight due to weather moving in. Thunderstorms were not in the forecast, but as a pilot one quickly learns you fly the weather you have, not the weather on the forecast.

It would be easier to fly the weather on the forecast.

Thunderstorms continued well into the evening as the instructor and I went over some ground school lessons for my instrument rating. We’re getting close to the big day!

I hope to fly this weekend.

Part of being a private pilot is doing a thorough pre-flight inspection of the airplane before setting off on an adventure. This is especially important with rental aircraft and double important for those aircraft being used by primary students. The flight school requires that a student pay for damaged tires; the tire shown above has a flat spot. It’s still safe, but it will need to be replaced soon. I’m happy I discovered this before my flight so I don’t get blamed for the flat spot and end up paying for the tire. Take a photo and send it to the mechanic.

The flat spots usually result from pilots having their feet on the brakes with they land. I had a tire blow out on a landing years ago; it’s not a pleasant experience.

One of my favorite photos of me in “aviator mode” is one of my earliest photos as pilot. Taken in January 2014 by fellow student pilot Nicole, I’ve always enjoyed my look of determination during my third flight lesson ever.

Because I grew up around airplanes and flew with my father quite often, my instructor Chuck said on more than one occasion, “you know things about flying an airplane that you don’t even know you know”. I can vividly remember this flight and the glass smooth air of the January skies in Upstate New York.

Last night’s flight in the Cessna 172. In case you’re wondering, you’re looking at one takeoff on Runway 33, followed by three instrument approaches to runway 6R, with a circle to land to a “full stop” on runway 24L. It was windy but I didn’t break anything.

In the desert it often gets too hot or stormy in the afternoon at this time of year for any sort of productive general aviation in a Cessna 172 or a Piper Cherokee. I like checking in to FlightRadar from time to time to see what I’m missing out on as I do my day job. All the smaller airplanes flying in the area at 6:00 AM (when I started my first meeting at work) are likely students getting their flights in before the desert heat makes things too bumpy.

I’m writing this while the blog is down. I’ll post it to this day after things are up and running again.

Tonight I flew with a different flight instructor. Ed was a pleasant guy, fairly new out of flight school but he has all the ratings he needs. He’s now building time so he can make his way to the airlines. We had a pleasant flight.

It’s always important to take photos of the aircraft when doing the preflight, especially slightly flat spots on the tires. Primary students have a habit of having their feet on the brakes when they land and this can cause flat spots and early tire wear. If you blow a tire, it’s your financial responsibility to get it fixed. I thoroughly check the tires during my preflight. Tonight one tire had a slight bit of wear but plenty of tread. I wasn’t concerned about it surviving one of my landings, but I took a picture just in case. 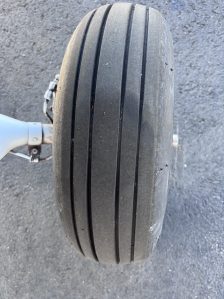