Earl and I are spending the weekend at Hillside Campgrounds. It’s our last weekend of the season. Once again, the theme of the weekend is relaxation. Well, perhaps it’s socialization. Or maybe it’s recreation. Conjunction junction, what’s your function?

I’ve been visiting Hillside since 1993. After all these years, the mystique of this gay male campground never fails to escape me. I have never been anywhere else where’s there is such a strong sense of community. When you’re driving in, you wave to those you pass that are walking on the small roads that take you through the various areas of the campground, areas such as “Lavender Lane”, “The Landing Strip” and “Buckingham Palace” (the “B” in that last one has a movable letter to make it an “F” on especially gratuitous evenings.) If you’re walking through the campground, you wave a hello to those driving in. Strangers talk to strangers as they’re walking by your campsite and sometimes it turns out that you have common connections, proving that it’s a small world after all.

Another example of the community here at Hillside is the “Helping Hands” fund, a charity intended to help those living with AIDS and HIV. This year there’s a camp cookbook for sale, a weekly BINGO game and other events and activities to raise money for the fund. Several permanent campers offer services (such as winterizing the sites, fixing plumbing, etc) and donate the proceeds to Helping Hands. A couple times each summer my friend Brad and I open up a barbershop for a Saturday afternoon. (Have I ever mentioned before that at once upon a time I considered becoming a barber? I couldn’t find a school locally that wasn’t a cosmetology school.) I basically handle the military style cuts and the shaves, since my barbering abilities amount to two types: “on” or “off”. Occasionally I turn a beard into a mustache that would make the Village People proud. Brad is a little more skilled at the cuts that leave some hair, so he handles those. We all have a great time and we don’t charge anything, but any tip money received is donated to the Helping Hands fund. In July we raised over $275.

Anyway, it’s another humid evening here at Hillside, one that affords me the opportunity to wear my recently discovered campfire attire of choice – a pair of black low cut briefs and maybe my Blue Marvel t-shirt. At times I feel overdressed. It’s a pitch black night, save for the thousands of candles, torches and little lights that twinkle here on the side of a large hill in the middle of the Endless Mountains. Off in the distance I can hear the sounds of the country line dancing going on at the rec hall. In another direction, Gloria Gaynor is singing “I Am What I Am”. And down the road I hear a bunch of guys laughing as they chat and dish around their campfire.

There’s a certain amount of mystique here in the mountains. 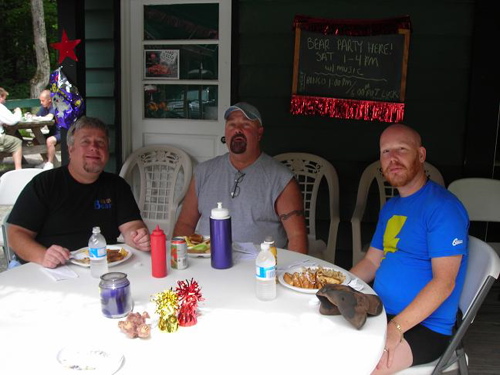