Someone has become very comfortable in our new home. I can’t believe it’s been two months since we moved to Tucson! Truman feels just as comfortable on an end table as he does walking along the ridge that flanks the staircase.

It is the 21st minute

of the 21st century 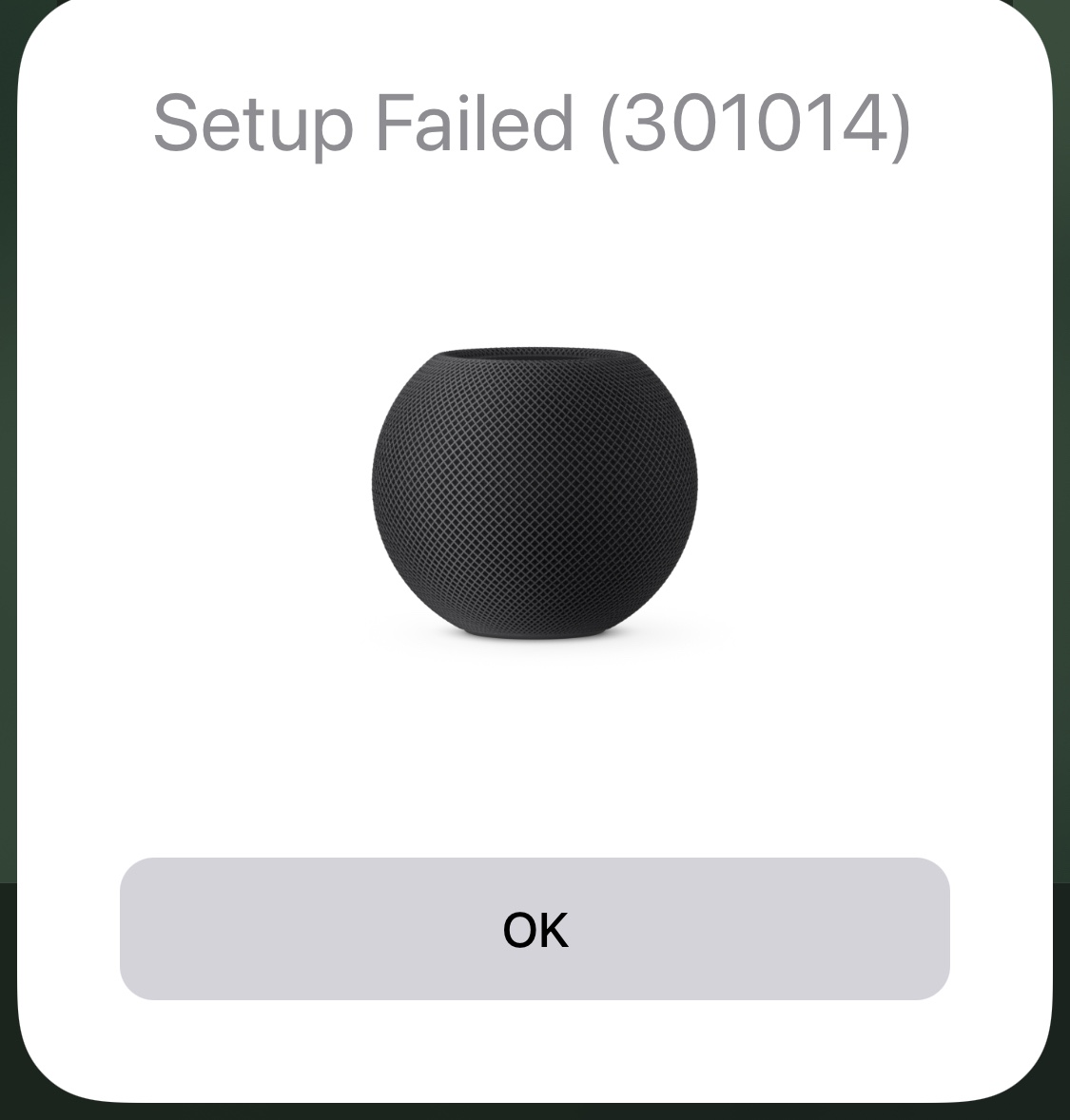 The saga with my newest HomePod Mini continues. After spending over an hour on the phone with Apple Support, and resetting every device within nearly a half mile of my home office, my HomePod Mini still will not complete its setup.

The Apple support technician promised someone from the next tier up would give me a call, but they missed their appointment time and I am having a hard time regaining interest in the endeavor.

When my HomePod Mini is stuck on “Configuring…” for hours, after taking nearly a dozen attempts to get the thing connected at all, and the HomePod team can’t figure out the problem, the world’s largest technology company needs to step back and take a look at what the heck their doing.

Luckily, we mostly rely on Alexa for home automation. I’m not super comfortable with this scenario, but at this point I want something that works. And while Alexa may be snooping on us, at least she’s doing it with much more reliability.

Anyone want to buy a HomePod Mini? 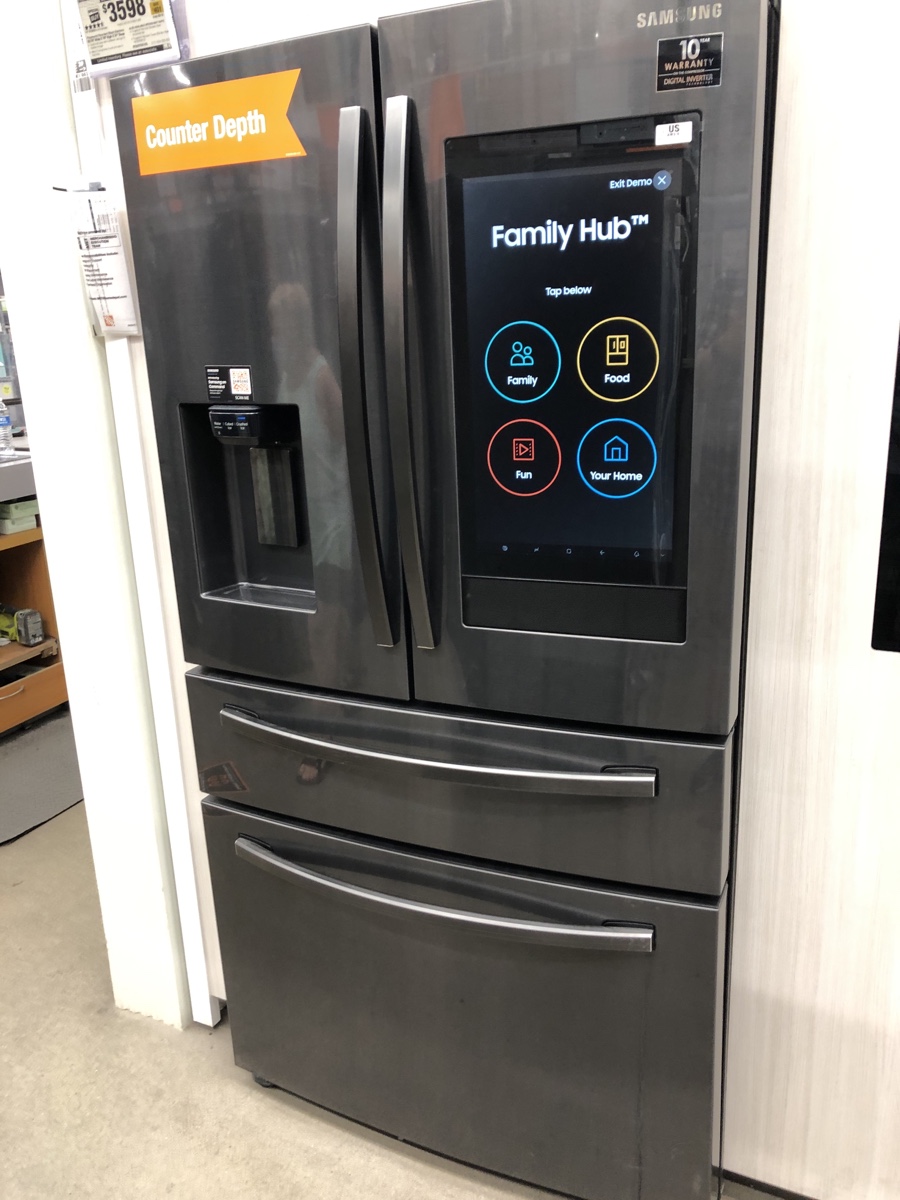 I admired this refrigerator at Home Depot. The refrigerator at home is probably the weakest link in our otherwise very well appointed kitchen; being the geek I am I would really love to see our kitchen have a state of the art refrigerator with a touchscreen.

The rest of the family is not on board, especially with the extra expense.

What’s the purpose of having a touchscreen in the kitchen? Well, with all of the automated gadgetry we have spread throughout our new home, having a centralized location to control all this stuff, without having to scream at the nearest Alexa or Siri device, or whip out our phone, would be nice. In every incarnation I’ve seen of “fully automated homes of the future”, touchscreens are everywhere. Touchscreens are a natural way to interact with various devices of technology, and with all the open space on a refrigerator door, this location makes sense.

The family is not buying it.

The touchscreen in question is basically a large Android touchpad. I don’t know a lot about it, though I’m planning on doing more research on how well it works, how it operates, and the added cost to the device.

The family is still not buying the idea of a touchscreen in the refrigerator. Yet.

I strive to choose my words carefully. I occasionally choose the wrong words when conveying thoughts; usually for emotional impact or as a result of personal heightened emotion. When using words with a sting, my voice is louder and higher in pitch, even when I’m sharing them via keyboard online.

I’m focused on using better words to help bring down the temperature of dialog. Everywhere. Online, in conversation, it doesn’t matter.

One of the things I most admired about my father was his capacity to keep calm and his discipline around language. I heard my Dad swear. Once. Maybe he just minded his language better around his children. I rarely heard him say something negative about someone. If he did, it was out of frustration.

Dr. Maya Angelou is on absolutely on target; words are “things”. Once we realize this, we understand what we’re putting out into the Universe through communication and language.

I think I’ve mentioned before how much I enjoy the music of Anders Enger Jensen. As I type this blog entry (in between coding projects at work), I’m listening to the track “Thinking Of You” from his album “Retro Grooves Vol. 3”.

The entire album is magic. Here’s a link to the album on Bandcamp. It’s also available on Apple Music and the like.

I decided we should probably check out the Wal*mart that’s just around the corner from our new home. From the outside it looks like a fairly new location. It’s not overly huge as it has only set of doors instead of two like found on the former “Supercenters”.

I’m not a huge fan of Wal*mart in general, but I am a fan of their use of technology. Anecdotes from employees indicate you can go an entire work shift at the store without ever talking to your supervisor or even another employee. The registers have been expanded to provide guidance on all aspects of the employment experience at Wal*mart and they are supplemented by apps on smartphones and the like. Plus, I’m pretty sure the chain runs on Linux.

Back to our local store. As expected, customer mask use is not as prevalent as seen in other stores in the Tucson area. I was not surprised by this and honestly I’m thankful to be fully vaccinated. The store is rather crowded and the selection of clothing in the Men’s Department was limited. Maybe I’m just the standard size of man in the Tucson population. I was able to find a couple of t-shirts for a decent price and my husband selected a couple of tank tops. We went to the front of the store to head through the checkouts.

This Wal*mart has a total of four checkout lanes. Four. The old Ames store in my hometown in Upstate New York had four registers for the first year of its existence when they realized the shopping population of the village of 2500 or so overwhelmed the number of registers in the store, so they added several more on the ends of the existing checkstands.

Zero of the four registers at this Wal*mart were populated by a store employee. All customers had to checkout through a self-checkout area, which was this large corral of self-service cash register being managed by two employees. Because this full service Wal*mart has groceries in addition to typical discount department store fare, there were carts everywhere, people using motorized buggies trying to navigate through this corral of relatively tightly packed shoppers trying to get through the self checkout process.

I am thankful for my vaccinated state.

Now, I’m torn when it comes to self-serve checkouts. On one hand, I like not having to interact with a cashier and being able to do things myself. On the other hand, I’m not paid by the corporation to do the work, I don’t see a drop in prices or an applied discount for doing the work myself, and I really don’t like the idea of taking a job away from someone trying to make ends meet by working at Wal*mart. I’m fine with self-serve checkouts when there’s a choice. It seems that Wal*mart is taking away the choice. I’m not a fan of that.

Overall I’m pleased that we experienced the Wal*mart closest to our home but I don’t feel the need to go back there again. If we’re in the mood for a Wal*mart experience there’s a Wal*mart Neighborhood Market down the way where we can buy snack food or something.

The kitchen in our new home has two of many appliances, presumably because one of the owners in the history of this house had a Kosher kitchen. While we don’t share in this need, we are grateful for having two ovens and two dishwashers. It makes prep (which I’m not a part of) and clean up (which I’m definitely a part of) much easier.

Because we have one or two graphic artist types in our family, our dishwashers are named and marked so we know which is which. 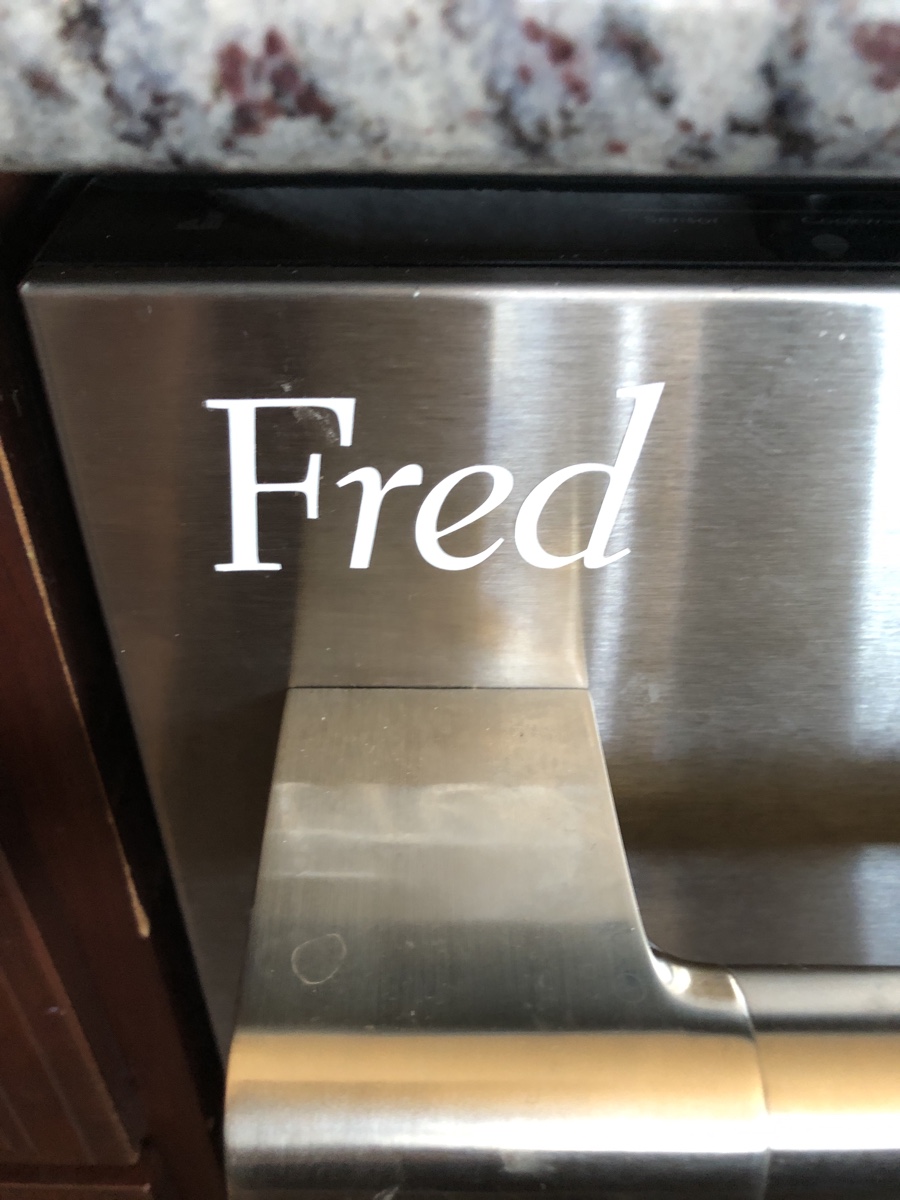 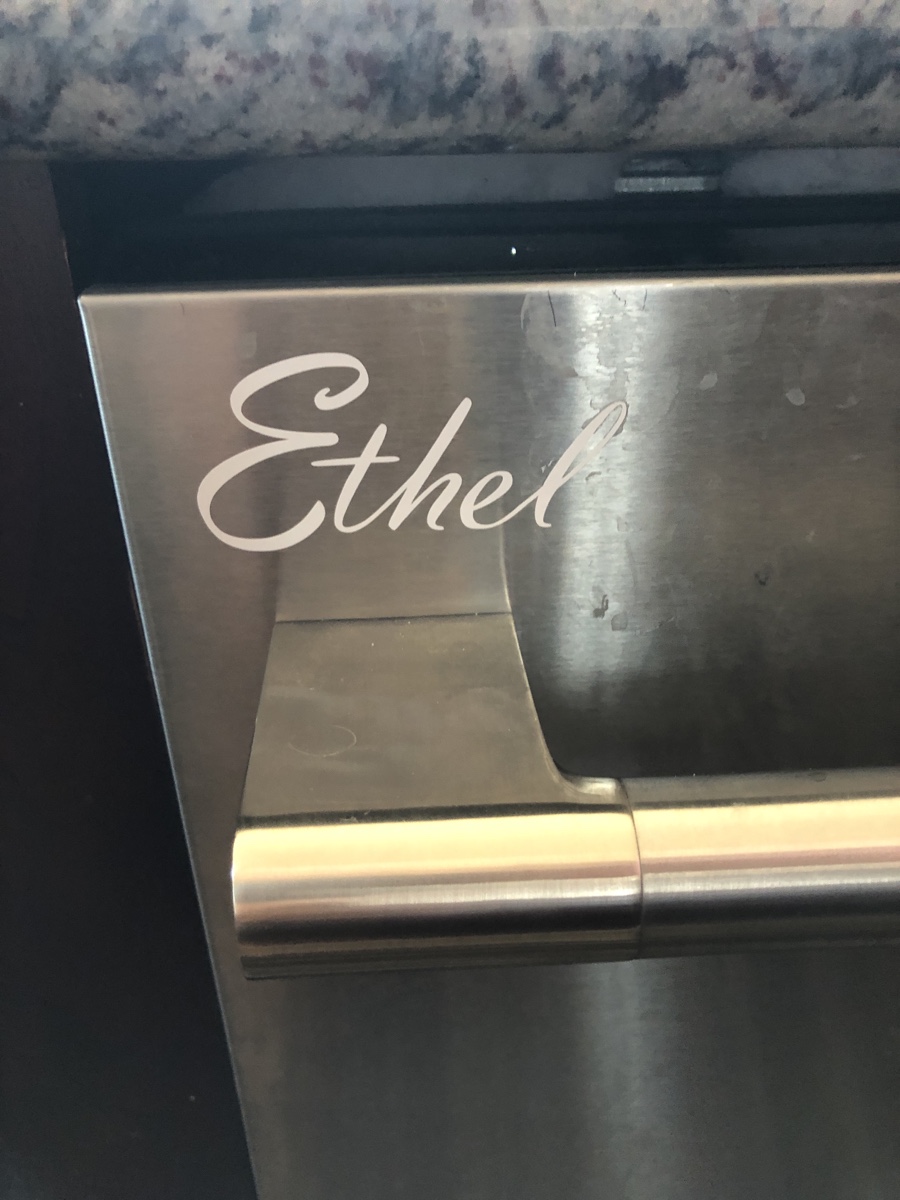 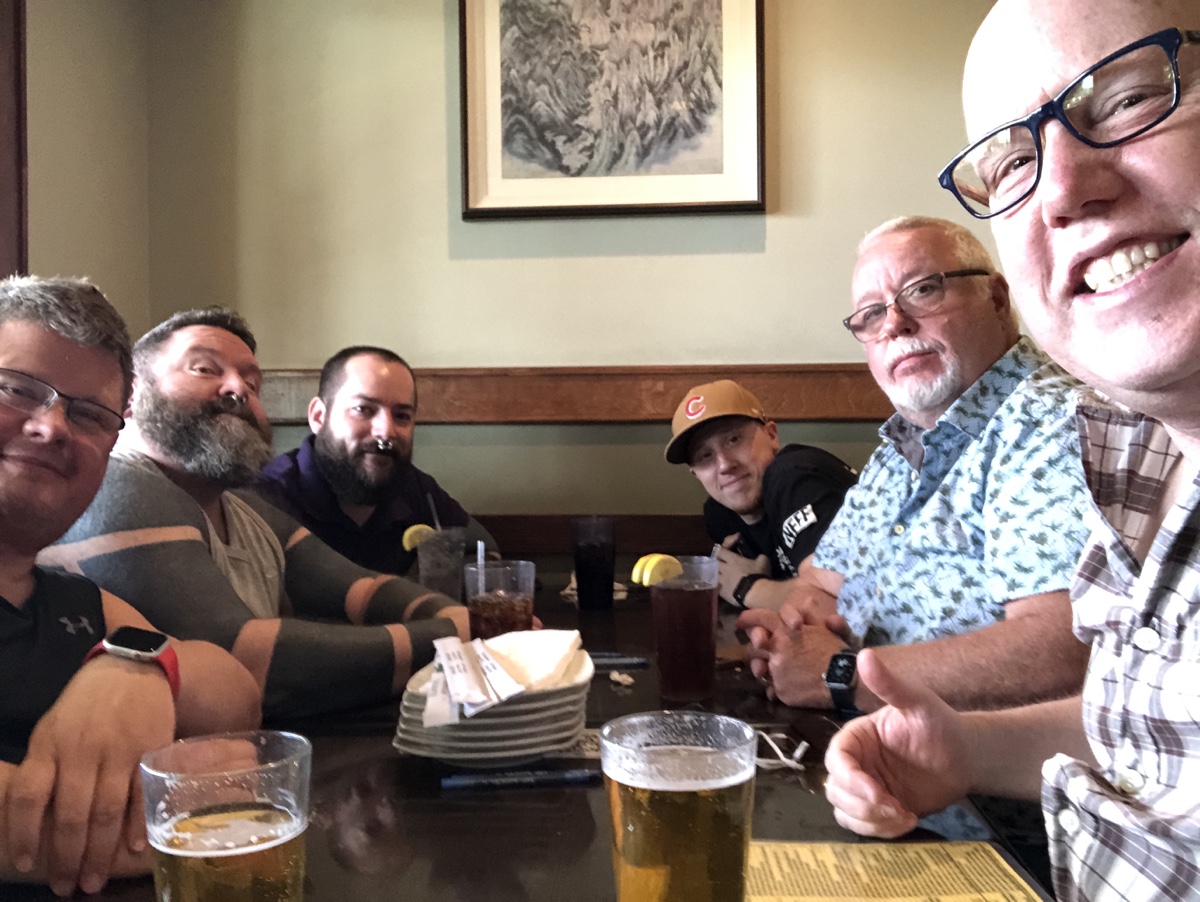 So the five of us, along with visiting friend Richie, went out to dinner in a restaurant for the first time in well over a year. We all have had our vaccine shots, and as of May 19 we will all be officially, fully vaccinated. We’re almost there, and since Richie was headed back to Chicago on Saturday morning we thought we’d celebrate with sushi in an actual restaurant.

Because I guess Desert Sushi is a thing.

The restaurant had just opened up a day or two ago (they’ve been take-out or delivery only all this time) and pandemic things were handled well. One door is marked for entrance, another for exit. There are blue arrows marked on the floor indicating which way you should walk if you’re moving about. Our temperature was taken upon entry and we were required to wear masks when not at our table. We kept our masks on when the server and like visited.

It’s not this difficult to do and I don’t have any issue with this.

I know the CDC announced that vaccinated folks don’t have to wear a mask anymore, aside from high capacity, crowded situations, but I feel like I should still be wearing my mask when in a public setting. While at this point I really no longer care what happens to people who decide to skip getting vaccinated, I still want to do my part in not spreading the virus around. As a fully vaccinated individual, I know I can still get COVID-19 and that the immunization provides my body with the knowledge of what to do if I get COVID. I won’t end up in the hospital. I won’t die. I trust the science.

But I don’t trust unvaccinated people to be wearing masks when they should be. Honestly, knowing someone chooses to remain unvaccinated makes me not trust them at all. For anything.

Before I get too much further into the weeds with this mini-rant, I’ll detour from that train of thought to say it was quite nice hanging out with family and friends in a restaurant for the first time in over a year. I’m happy science quickly brought us to the point of being able to do this. 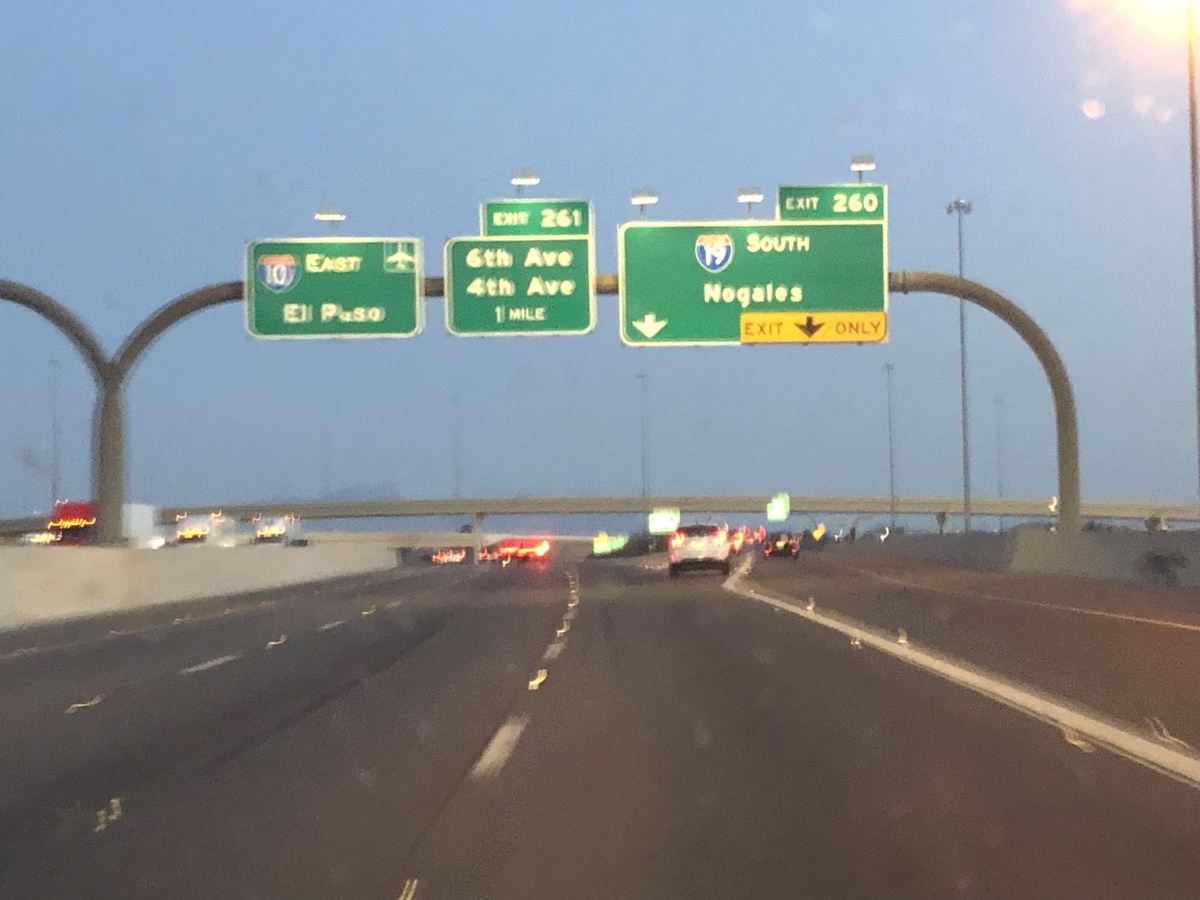