It has been announced that Isaiah Washington has been signed on to the cast of the remake of “Bionic Woman”. Did you just hear that slam noise preceded by some metal clanging? That’s the bionic fist of every gay man and lesbian that grew up with Jaime Sommers as their hero slamming the coffin shut on this weak reimagining of our beloved show.

First, David Eick grabs the name “Jaime Sommers” and the title “Bionic Woman” after dropping the “The” from the beginning of it and turns our beloved hero into a bartender drop-out who has some anger issues. Next, they include a deaf younger sister, played by a hearing capable actress that talks in embarassingly stereotypical “deaf speech” while she’s signing, which outrages the deaf community. They drop the deaf sister instead of recasting a deaf actress in the role and then decide to punch it up a notch by casting a man who is surrounded by controversy for anti-gay remarks and put him on a show with a historically MAJOR GAY FOLLOWING.

Are you fscking kidding me?

I was boycotting the show because of the desecration to Lindsay Wagner’s portrayal of Jaime Sommers and the lack of the ch ch ch ch ch ch ch ch sounds. The reason for my initial boycott pales in comparison to the reason I’m boycotting now – Isaiah Washington’s presence makes it a definite no-go.

There’s only one Jaime Sommers. And she was a tennis pro turned school teacher in Ojai, California with a really cool side job, some wicked strong legs and arm and wicked cool hearing and she had a really fast dog named Max.

Anything else is just a travesty. 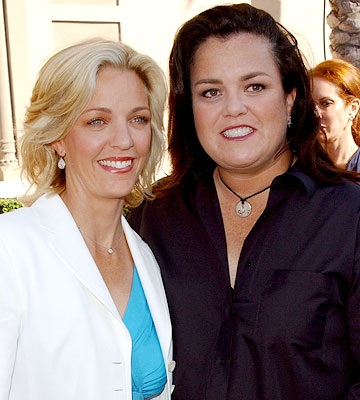 It has been officially announced that Rosie O’Donnell will not be returning to “The View”, opting out of her contract three weeks early. Actually she asked for a leave of absence or something.

“The View” website says “Tune in on Monday, May 28 for Rosie’s last day with The View.”

Whether you agree with Rosie or not (and I do 99% of the time), you have to admit that Rosie contributed to the American experience by getting people talking. Rosie’s outspokenness made people sit up, listen and think. It prompted many to speak out. And in these turmulous times, it’s important that each of us takes a moment to think about what’s going on in our country and the world. It’s o.k. to ask questions, even if your answer or opinion is different from those around you.

I’d like to thank Rosie for helping others find their voice and prompting them to look at the issues and views and forming their opinion. Best of luck to you and your family.

As many as 32 dead from a shooting at Virginia Tech this morning. I’d say more, but I’m speechless.

“The Doomsday Clock” has just been brought closer to midnight per an article in USA Today. The new time of five minutes before midnight (armageddon) is reminiscent of the days after Hiroshima and Nagasaki. I find this to be a little frightening.

IT IS 5 MINUTES TO MIDNIGHT
2007
The world stands at the brink of a second nuclear age. The United States and Russia remain ready to stage a nuclear attack within minutes, North Korea conducts a nuclear test, and many in the international community worry that Iran plans to acquire the Bomb. Climate change also presents a dire challenge to humanity. Damage to ecosystems is already taking place; flooding, destructive storms, increased drought, and polar ice melt are causing loss of life and property.

Always looking for the irony, there’s an episode of Wonder Woman where Ted Shackelford and Joan Van Ark come back from the future, and one of them mentions that there were considerable changes in government after “the nuclear holocaust”, which took place in 2007. Now I’m not basing what lies ahead on an episode of Wonder Woman, but it does make you take pause for a moment.

Between North Korea, the mess in Iraq and now the heating up of activity in Iran, this may be turn out to be quite the year for the history books. I hope we can find a peaceful solution all around.

I never thought that I would say this to myself, let alone in public, but perhaps New Jersey isn’t so bad after all.

Take a look at what changed my mind. New Jersey took a very big step in a positive direction today. Now if they’d only do something about 1. the traffic and 2. that nasty accent.

You know I’ve been thinking a lot about these school shootings lately. I know I’m not the only one in the country thinking about them but I can’t really shake the sadness I feel from them.

Is this is what our society has become?

Thirty years ago when I was in second grade, I had two major concerns going on in school. The first was how I would be able to dance with Joyce Roberts during square dancing in gym class. You see, I just loved Joyce and she was always fun to dance with, but she was tall. Very tall. How would I reach up to her to put my hands around her to dance? The other concern was that the elementary school had just purchased three new film projectors, and as Mrs. Hayden’s designated class film projector operator (she had to keep me busy, these days I’d probably be zoned out on ritalin), I had better know how to run these new fangled Singer film projectors. I heard they were much different than those made by Bell & Howell.

And that was the extent of my worries in elementary school. If I were that age today, would I have to worry that I was going to be shot by some madman that had broken into the school? My goodness, I don’t think the thought of someone breaking into the school crossed anyone’s mind back then.

The world has become so crazy. When I think of those young girls in that Amish school in Lancaster County, Pennsylvania, my soul jumps through so many emotions. Obviously sadness, on several levels. Incredibly, however, I also feel a sense of awe and honor. Some accounts say that two of the older girls volunteered to be shot first in the hopes that the others could escape unscathed. The word admirable does not even begin to describe the courage of these two young women as they saw, accepted and sealed their fate at the hands of a madman.

Many advocate for the abolishment of guns completely. Of course you really can’t do that because you’d be trampling on the rights of citizens, but there certainly needs to be many, many more gun control mechanisms in place.

I have many questions, but like others, I don’t have many answers.

But as I think about it, how could you not have heard? I mean, everytime I glanced at CNN this morning at work, there’s Tom Cruise with a big toothy grin at a press conference, yammering on about the arrival of his newborn child. I guess I’m happy about the arrival of their child, but is it really that big of a deal that it has to be plastered all over CNN? Remember when CNN told us about important things, like terrorist attacks, summits of world peace and the like? Now they tell us that Tom Cruise and Katie Holmes had their baby. Where the important stuff, like why gas has gone up 20 cents a gallon in the past two weeks.

Tom and Katie had a baby.

Now that I think about this more, I say “big deal”. So Tom got part X into slot Y and the result was baby Z. What about the thousands of other couples that had a baby yesterday. Where’s their limelight?

For most of the United States, at 2 a.m. daylight saving time will come to an end. Before you go to bed, be sure to set your clock back one hour if you live in an area observing Daylight Saving Time.

I’ve already ranted about Daylight Saving Time once this year, so I won’t do it again. I’m just happy that when I awake tomorrow morning, my body will once again be in sync with the earth and I won’t be trying to fool it by thinking it’s an hour later than it already is.

I just know I’ll feel much, much better.

I found this story totally ridiculous. Just another reason on a list of over a thousand of why I feel the country has completely lost it’s mind and why I don’t go to Wal*Mart (Always White Trash, Always).

Someone was thoughtful enough to post a comment in my entry earlier today regarding the “Katrina-bound” ice arriving in Maine.

Here’s “the rest of the story”, as the phrase goes.