Syracuse Hancock International Airport (SYR) is coming to the end of a $60 million dollar renovation project. For the past several years, enhancements and upgrades have been made to this aging facility in efforts to beef up security, improve the traveler experience and to make the airport more attractive to airlines so that there will be more flights in and out of Central New York.

Among the improvements to the airport was the relocation of the security screening area. Formerly located in separate entrances of the two terminals (Terminals A and B, color coded orange and blue in honor of the Syracuse University Orange), the security screening area was moved to the center of the terminal building with a very impressive window looking out into the taxi- and runway areas. Further enhancements included spruced up bathrooms and the addition of Adirondack style rocking chairs in the common waiting area.

Since the combination of the two security screening areas negated the need for the two second-level “bridges” that led to the terminals, passenger traffic was reconfigured to use these former areas as terminal exits. Theoretically, it would have been more efficient for all involved to just abandon the bridge idea, put a set of stairs/escalator/elevators where the bridges used to be, since now passengers have to exit on the second floor, retrieve their luggage on the first floor and then most likely return to the second floor to take the bridge to the parking garage and lots. This would have effectively killed the food vendor that sits near the former terminal entrances on the second floor and probably created a lot of wasted space, and when you have as much extra space as Syracuse Airport does, you want to make things look vivacious.

One of the reasons for combining the security screening area into a common location was so that the TSA didn’t have to maintain two crews. With everything centralized they could concentrate on serving all of the passengers as efficiently as possible. However, since the old terminal entrances were repurposed as the new terminal exits, there was still a security concern, since you have to monitor the exit to make sure no one is sneaking in. 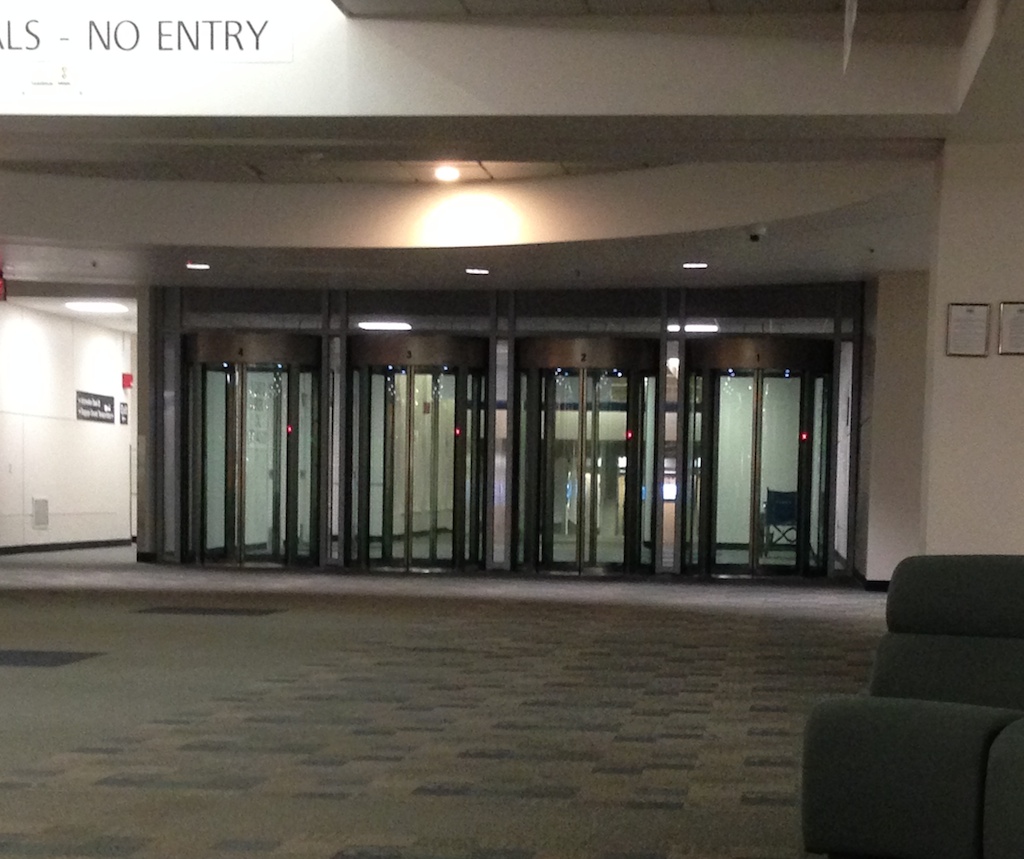 These nifty looking contraptions have been installed at the terminal exit for both Terminal A and Terminal B. Notice that there is no human presence at these portals monitoring for unscrupulous activity. One of the things that I have always noticed about Syracuse Airport is that when you’re off the plane, no one cares about you. The signs leading you to your ground destination are nebulous at best, there’s no peppy music, the food offerings are crappy at best and now, there isn’t even a security guard at the exit to smile at. Instead, you’re greeted with a glass chamber showing an LED-lit green arrow.

You enter the portal. Notice the camera in the upper left hand corner. Up to six people are encouraged to enter the portal at the same time but that rarely happens, instead, people queue up like sheep and go through the portal one at a time.

Once you’re in the portal, a very robotic female voice will warble something about the door shutting behind you. The door shuts and you’re in the glass tube. Now, you would think that the door in front of you would immediately open, but it doesn’t. From my experience with these stupid things thus far, the time between being sealed in the canister and then being released is variable. I’ve counted the seconds. Sometimes it’s one, sometimes it’s three. I have a suspicion that it has something to do with the camera, because when I stuck my tongue out at the camera it took four seconds.

The pod or container has a distinct feeling of confinement. It’s too small for my comfort, despite the fact that it’s made of bulletproof glass. I doubt that six Americans could honestly fit in the thing, but the Powers That Be at SYR insist that’s what you’re suppose to do.

The robotic voice warbles something about the other door opening and it slides open, allow you to exit into normal society. Officials tell us that we haven’t been X-rayed or decontaminated in anyway, but I still think there’s something going on with that camera. Experience has shown that no money flies around and that there’s nothing removing bad gas that remains from the passenger that used the portal ahead of you.

Because it takes several seconds to basically achieve the same action as walking through a doorway in the rest of the world, lines form at these exit pods. So, after several hours of sitting on a plane that was most likely running late, you get to wait in line again to be allowed to leave the airport.

Am I the only one that finds this insane?

My dear friend Arnie sent me a link to a story on NBC News about these new fangled exit doors at SYR. According to the airport commissioner, Christina Callahan, they are TSA approved and everything!

Quick aside, I don’t know Ms. Callahan in any way, nor do I know her background or qualifications or anything, but I don’t think that photo is very flattering. People say horrible things about her online, but I don’t know if they’re accurate or not.

Back to the NBC News Story. The thing about these doors being TSA approved is that the TSA has decided that monitoring terminal exits is not under their jurisdiction. Monitoring the exit doors is up to the airport, so I guess Ms. Callahan is free to do whatever the airport wants to do with its terminal exit doors, but I had a few concerns:

1. Since there’s no one around, how long will it take for the person watching the cameras to figure out that someone is stuck in the portal and then send help to retrieve this person.

2. If the power goes out at Syracuse Airport, does that mean we can’t leave?

3. If there is a fire, what do we do? I didn’t notice any alternate means of escape and these doors aren’t like a hotel lobby revolving door. There’s no pushing. No pulling. You are at the mercy of the robotic woman with the warbling voice.

Apparently these new portals are going to save the airport boatloads of money because they don’t have to pay a rent-a-cop $10-15 an hour. Unfortunately I haven’t found any information as to how much these exit contraptions cost, nor could I find manufacturer information on them. As a quick note, the other night it was observed that SYR is also saving money by releasing the Jetway operators for the night BEFORE the last flights have arrived. It’s easier just to have the passengers deplane via stairs and through the wind and rain anyway, why bother with the Jetway.

My whole take thing about these doors is this: they’re stupid. They’re a waste of money. They belong in prisons, not in airports. If you’re trying to make the airport seem like a warm, inviting place by putting in rocking chairs and the like, don’t make your passengers enter the land of the Salt City by putting them through a glorified decontamination chamber. It’s rude. It’s cold.

Sometimes it takes a little cash and little human interaction to make an airport seem like a friendly, inviting place.