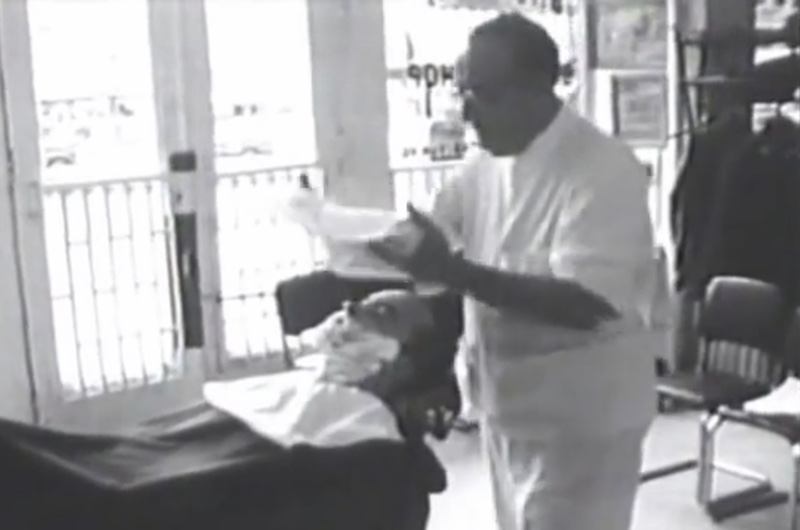 So in the latter half of my 20s I had a red flattop. This was starkly different from the way I had worn my hair in my teens, but it was the mid 1990s and times were different. No longer did I have the fluff and go hair that could rival of Flock of Seagulls, but rather I had something that would make a military commander proud, if the likes of me were allowed in the military at the time. Because of the crispness of my haircut I tended to get it cut once a week and this was something I enjoyed. I had a couple of different barbers that I went to depending on which office I was working at when I felt my hair had gotten too shaggy. At some of the shops I would also get my mustache trimmed and if I had time, I’d get a shave as well. This was when there were still old-school barbershops with older barbers who were scary but really weren’t once you got to know them.

I remember I was at the shop on the former Air Force base when the barber indicated that perhaps a flattop wouldn’t be viable for much longer and would I rather buzz my hair down instead. The stark reality set in, I was going bald at age 28 or so. This was kind of weird to me because I had heard horror stories of men finding clumps of hair on the pillow and in the shower drain and the like but I was not finding this to be the case. Of course it was because my hair was so short to begin with, there wasn’t much to find on the pillow.

My husband and I were in our first apartment together when I decided to stop buzzing my hair (or getting it buzzed) and started shaving my head. Shaving my head betrayed my aging self and was already starting to become popular at the time. It was not as common as it is today but it was not unheard of. Plus, Gillette had recently leashed the “Mach 3” onto the masses and this made it easy to do.

I regularly shaved my head for over 20 years before I decided I was getting sick of it. I’m not able to “change up” my hairstyle in anyway. I either have hair here and there or I don’t. But I’m now in my early 50s and I’m not trying to hide the fact that I’m a naturally bald guy anymore. I’m not angry or upset about being bald, though all of my male cousins are blessed with full heads of hair. It is what it is and I’m almost at the point where I’ve been a bald guy for longer than I haven’t been a bald guy.

I’m just sick of shaving my head every morning.

So now I have a very short buzz cut around the fringe like every other bald guy in dad jeans in his mid 50s. I do miss going to the barbershop and hanging with the guys, though. Even when I shaved my head on a regular basis I would occasionally go to a shop for a head or face shave just because I could. Some men find it weird to have another person shave their face but I find it relaxing and I’ve never had a bad shave from anyone, young or old. The most startling experience was from a heavy Russian woman in Hells’ Kitchen in New York, but it was still awesome and she was friendly in a gruff, vodka laden way. The only disappointing shaves I’ve had from a barber have been in a past couple of years where the younger barber opts to skip shaving cream and just wipes some sort of thin, clear goo on my face and then uses a very cheap disposable razor to do the deed. That can be a less-than-relaxing experience.

The key is to find some of the old guys that are still working.

I’m curious to see how many barbershops and related salons close down permanently in the coming months because they were unable to survive the mandatory shut downs during this pandemic. Will I want a man or woman in such close quarters to me again as to allow them to drag a razor across my face? I’m not sure.

One thing I do know though, when this whole pandemic thing is merely a memory, I’ll still be a bald guy, whether with some bits on the back and sides or with a clean shaven cue bald head.

And I’m perfectly OK with that. 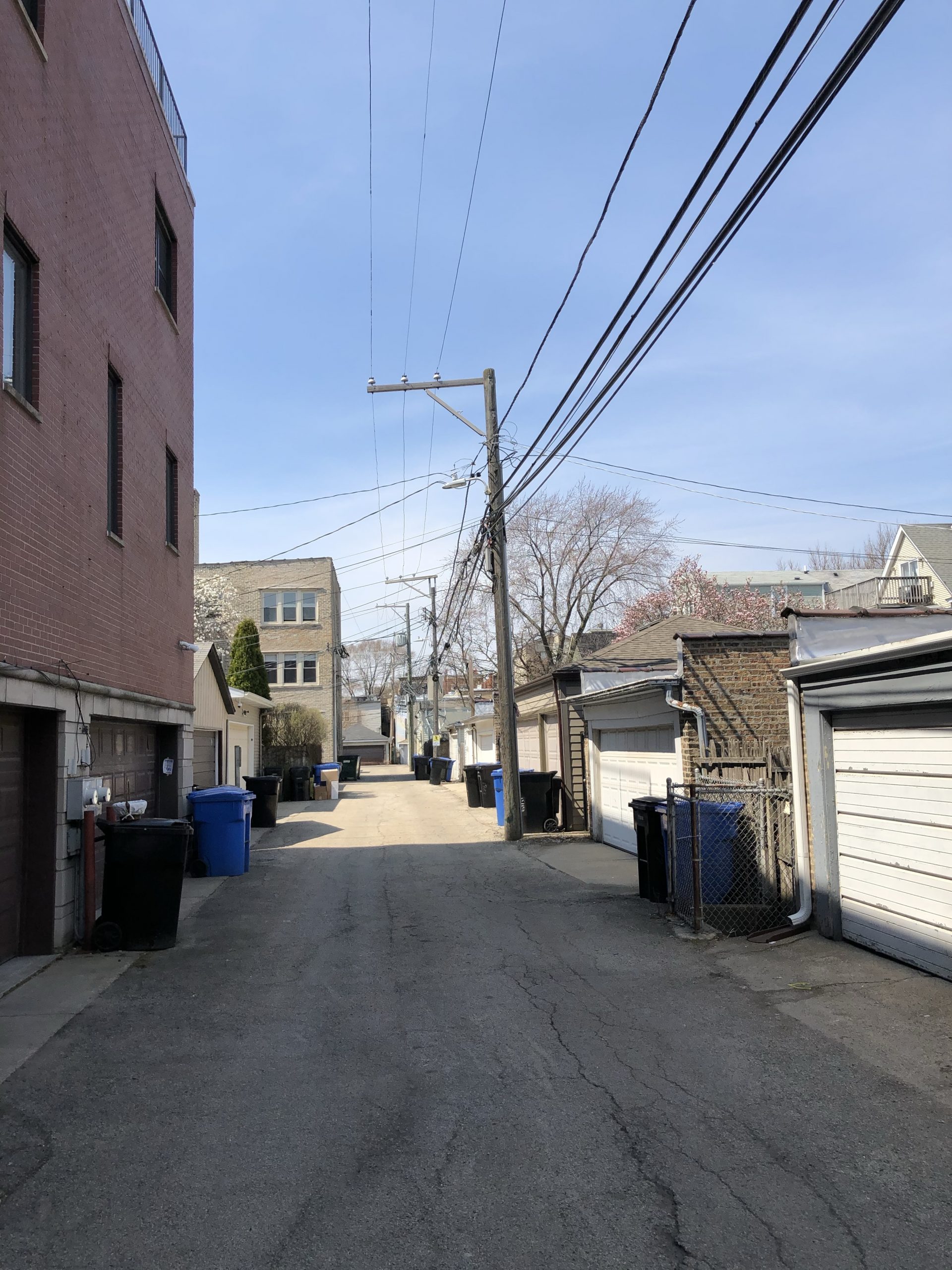 I’m opting to walk mostly through alleys these days. It’s the best way to avoid people on the street. While some folks are maintaining social distancing protocols, others are walking three or four abreast on the sidewalk, leaving others to walk around them out in the street.

One of the things I noticed from the alleys today was the sounds of people getting together in the backyards hidden by the garages and garbage cans. Kids playing in the back yard, even the sounds of a barbecue in progress. I don’t know how many people were in attendance at these ventures but it was nice to hear traditional sounds of spring in progress. I hope people are being sensible with their get togethers.

One of my husband’s friends wondered if we’d see the return of the Drive-In Movie to mainstream America. I’m wondering the same thing. While this pandemic may not drastically change “normal” in the long run, I’m thinking people are going to be skittish for the next year or two. Drive-In Theatres might be a great way for people to get out of the house and enjoying entertainment again. It’s not great for the environment though.

I know we have quite a few Drive-In Theatres that have been converted for other uses here in the Midwest. Maybe they can be brought back to their original glory.

Walking through the alleys it’s very rare that I see any of the critters that live back there, especially when walking during the middle of the day. On my early morning walks before work on weekdays though it’s not uncommon to see a rat or two scurrying from point A to point B. I see rabbits on the street and rats in the alley. I saw a coyote a while back, he was just hanging out. Maybe he was looking for rats as well.

I hope people start being a little smarter about social distancing as this thing goes on. People are anxious to get outside here in Chicago now that the trees are blooming and such. Some folks must feel invincible because they have a mask on. I’m surprised at the number of people with a mask on failing to cover both their nose and mouth. Covering only the mouth seems to defeat the purpose.

In the meantime, I’ll stick to my fair weather walks on the back side of the neighborhood. It’s not the best way to exercise and sometimes the fresh air isn’t as fresh as I’d like it to be, but it’s better than nothing.

And better than nothing is all we can hope for right now. 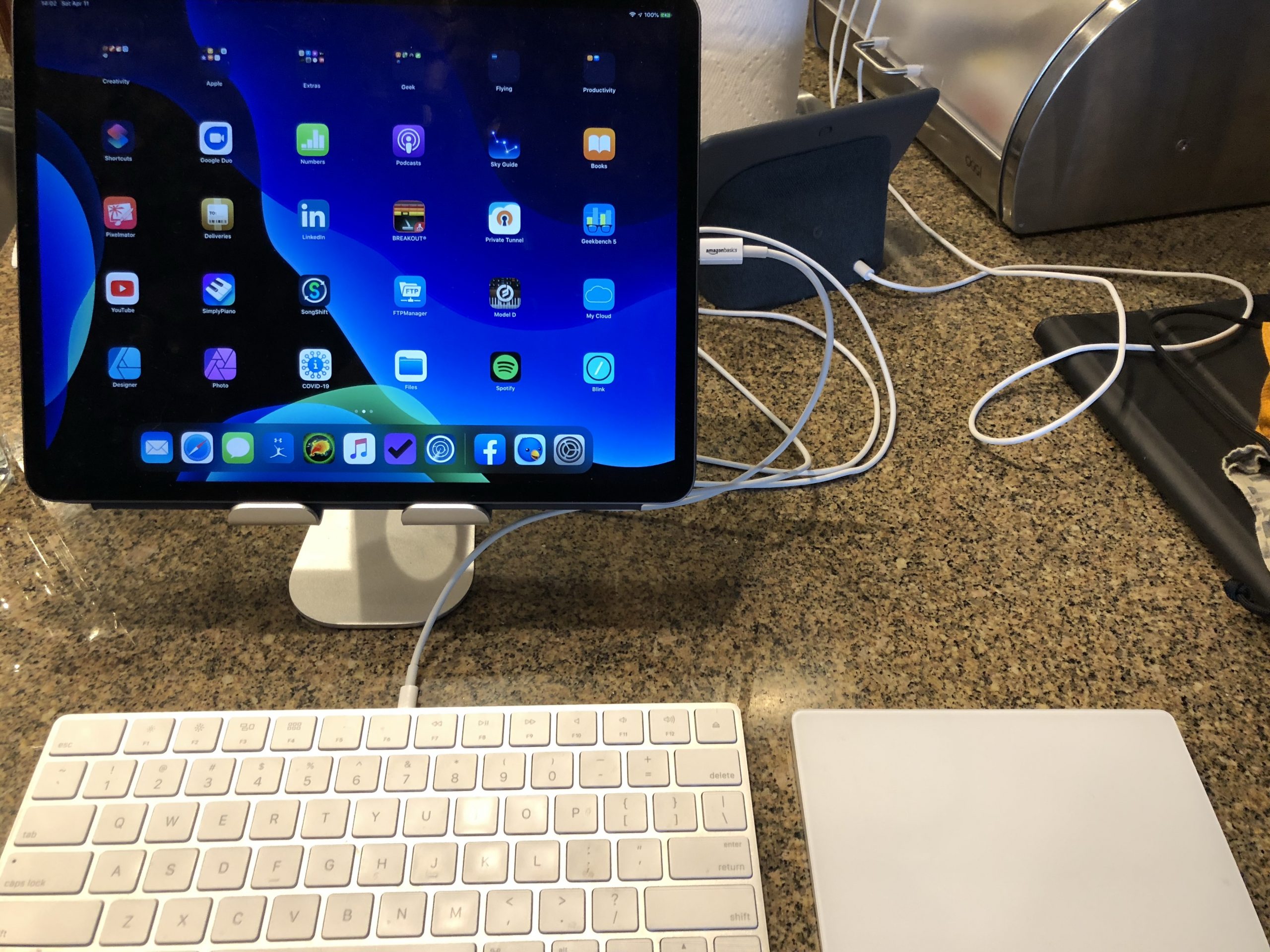 So I’m using downtime to try the new pointer support in iPadOS 13.4. Well, technically I’m using iPadOS 13.4.1 at the moment, but the functionality was fully introduced in 13.4 and I’ve heard great things about.

When the iPad first came out over 10 years ago, the thought was it would be a consumption device. You’d sit back in a chair and casually watch videos, read book, and browse the Internet. As time has gone on, Apple has decided to push the iPad, and more specifically the iPad Pro, as the next generation computer. Their “What Is A Computer?” marketing push has invited users to push the boundaries of what defines a computer.

Since purchasing my iPad Pro back in 2018 I’ve tried to make it my primary personal computing device and I’ve found that it’s about 95% there. As a power user and developer, the only thing I miss from the experience is being able to tinker underneath the hood at a shell prompt, but it’s not an absolute necessity for me. I still have my trusty 2015 MacBook Pro (the last generation before the butterfly keys made an appearance) and that’s working just fine.

Trying a keyboard and trackpad with my iPad Pro today feels like it’s taking the experience to another level. I’m excited about Apple’s release of their Magic Keyboard for iPad Pro coming out next month and I’m going to be pestering my husband to make the purchase. The only thing that gives me pause about that is the missing ESC key in the upper left hand corner, but there’s other ways to single an ESC on a keyboard (I think it’s CTRL-[).

I’m going to work with this setup today and see if this is truly the game changing experience I think it is.