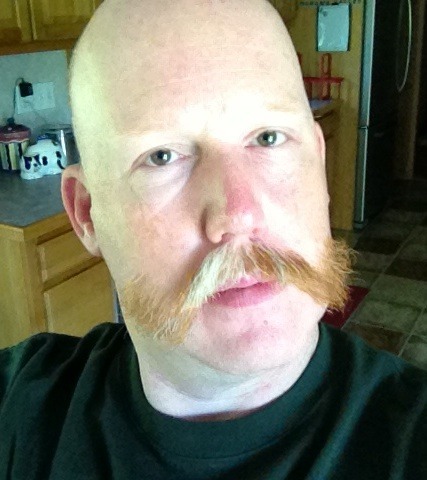 So last week I started a campaign to raise money for the Ali Forney Center. I am doing this by letting you decide the fate of my mustache with the ‘Stache On-‘Stache Off Campaign. Through the 24th of August, you can make a donation to the Ali Forney Center by voting on whether my ‘stache stays or goes. If it is determined that my mustache stays, I’ll let it just keep growing through the end of the year (though I might clear some brush from my lips once in a while so I don’t miss important kisses.) If it is decided that it’s time to go, I shave it off completely and then probably grow a little mustache because I can’t being completely clean shaven.

As of this writing, ‘Stache On is winning.

If you would like to contribute, and again, it’s for the worthy cause of helping homeless LGBT youth (click here for more information), here’s what you do:

And thanks in advance for helping the Ali Forney Center.

I can be an emotionally responsive person. I usually don’t realize how emotionally responsive I can seem because it comes naturally to me. I don’t know that I fly off the handle at the drop of a hat, but when my mood is in a certain space and the circumstances are in a certain place, I can get loud. I usually try to restrict this sort of behavior to my alone time but my family occasionally gets to see the best of it. It’s not something I’m proud of.

I never used to swear. I don’t remember my father swearing that much; I think my mom would occasionally swear around us kids. I didn’t really pick up the habit until I worked at the radio station where you needed to drop a few f-bombs to get anyone’s attention. Screaming and yelling and swearing was the normal course of action for speaking at any sort of meeting while I was working there, so I adopted the tendency as a matter of survival. When you work at a place where people throw knives (wish I was making that up), you sometimes need get rowdy. Again, not something that I’m proud of.

As I was going through my work email this morning, I found myself yelling out loud in my office. “What the F^!K did you think, numb nuts?” Now I don’t know if this person has numb nuts. Since the email in question was from a woman, I kind of hope that she doesn’t have nuts, period, but that’s her business. To each their own. I started firing off a snappy email when I decided to just close my eyes, count to 10 and then reassess the situation.

It really wasn’t worth raising my blood pressure over. You see, after I counted to 10, I realized that the world was still spinning and that nothing had changed, other than my blood pressure subsiding a bit. This prompted me to send out a simple tweet this morning:

I should probably stop calling other drivers “flea-bitten whores.”

Now I wasn’t driving at the time and actually the thought was completely random (that happens a lot with me), but it is something that I am going to remember via a sticky on the dashboard of my Jeep.

Since counting to 10 worked so well for me this morning (and my day has been just fine since), I decided to see if there was a way to remind myself that I should just take a deep breath. Of course, there’s an app for that.

Introducing CalmDown. Now when I get a bit riled up, I have the little ying-yang symbol in my menu bar to click on and remind me to calm down just a little bit. Yeah, it costs a buck but sometimes you have to invest in yourself. If this will help me lower my blood pressure and be a little more rational about things, then it’s worth it.

Now, if I could just stop the fucking swearing. Jumpin’ Mice.