There’s a ton of buzz about this ABBA Voyage coming out later this week. We know we’ll get some new music and maybe a concert with some holograms. I’m really excited to hear one of my favorite groups again. I’ve always loved ABBA and the idea of them releasing new music after nearly 40 years is a bright spot in a desperately bleak century.

As a refresher, here’s the last song ABBA released before their “temporary hiatus”. From 1982, it’s “Under Attack”.

Some days, you just have to hold your tongue. Other days, the mouth says what it’s going to say.

During our travels yesterday, we stopped at the Sunset Point Rest Area on Interstate 17 between Phoenix and Flagstaff. We did the same thing 18 1/2 years ago in March 2003. 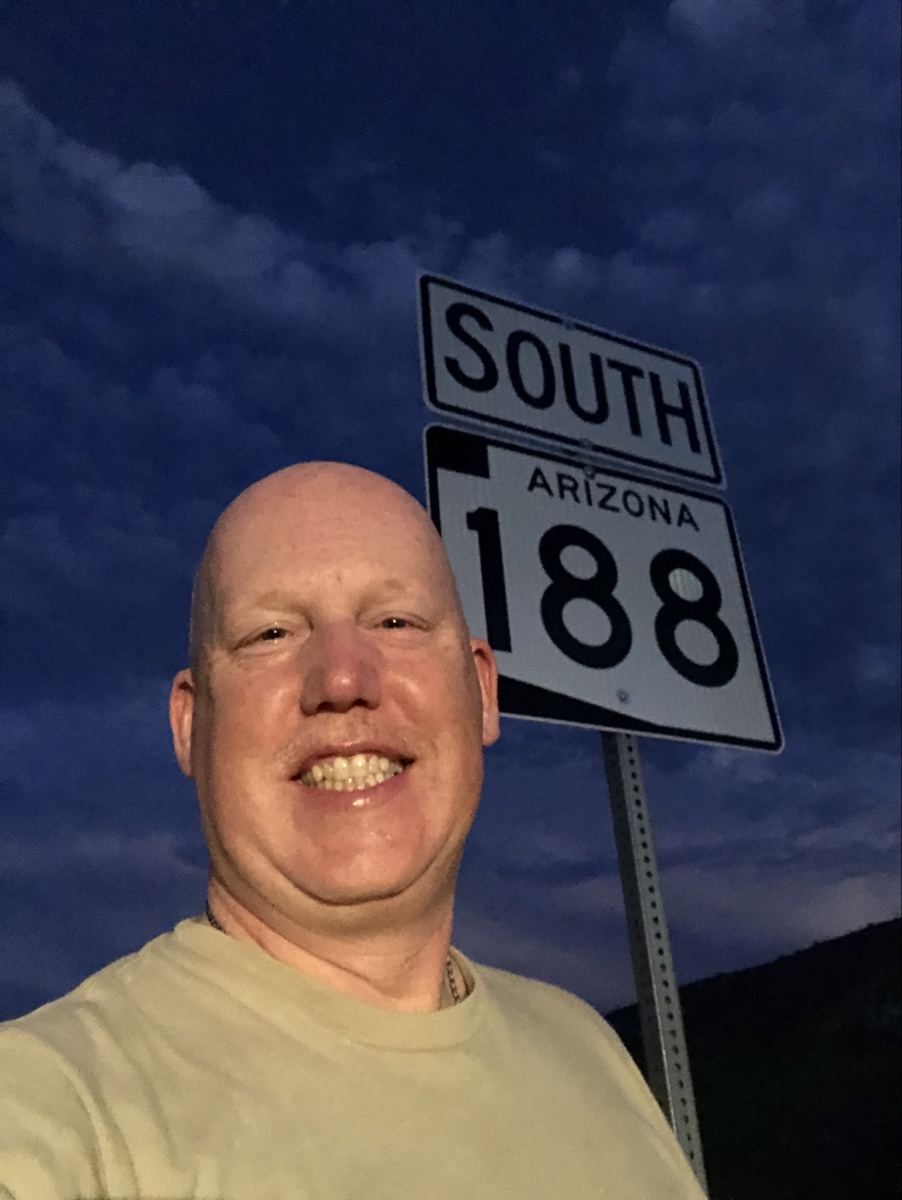 So, we’ve lived in Arizona for five or so months and I finally found my “favorite road” to drive (thus far). We’ve been around a good portion of the southeast corner of the state, and State Route 188 has been deemed my favorite.

State Route 188 here in Arizona runs from US 60 just west of Globe to State Route 87 south of Payson. The road is wide and open, with the speed limit as high as 65. Like favorite NY Route 177, Arizona State Route 188 runs through very few towns; one basically has to slow down to pass through Roosevelt and to go over the bridge near Theodore Roosevelt Dam. Much of the route passes alongside the Roosevelt Reservoir.

It’s open, with gentle curves, interesting desert scenery, and I find it a pleasure to drive. I look forward to doing it again soon. 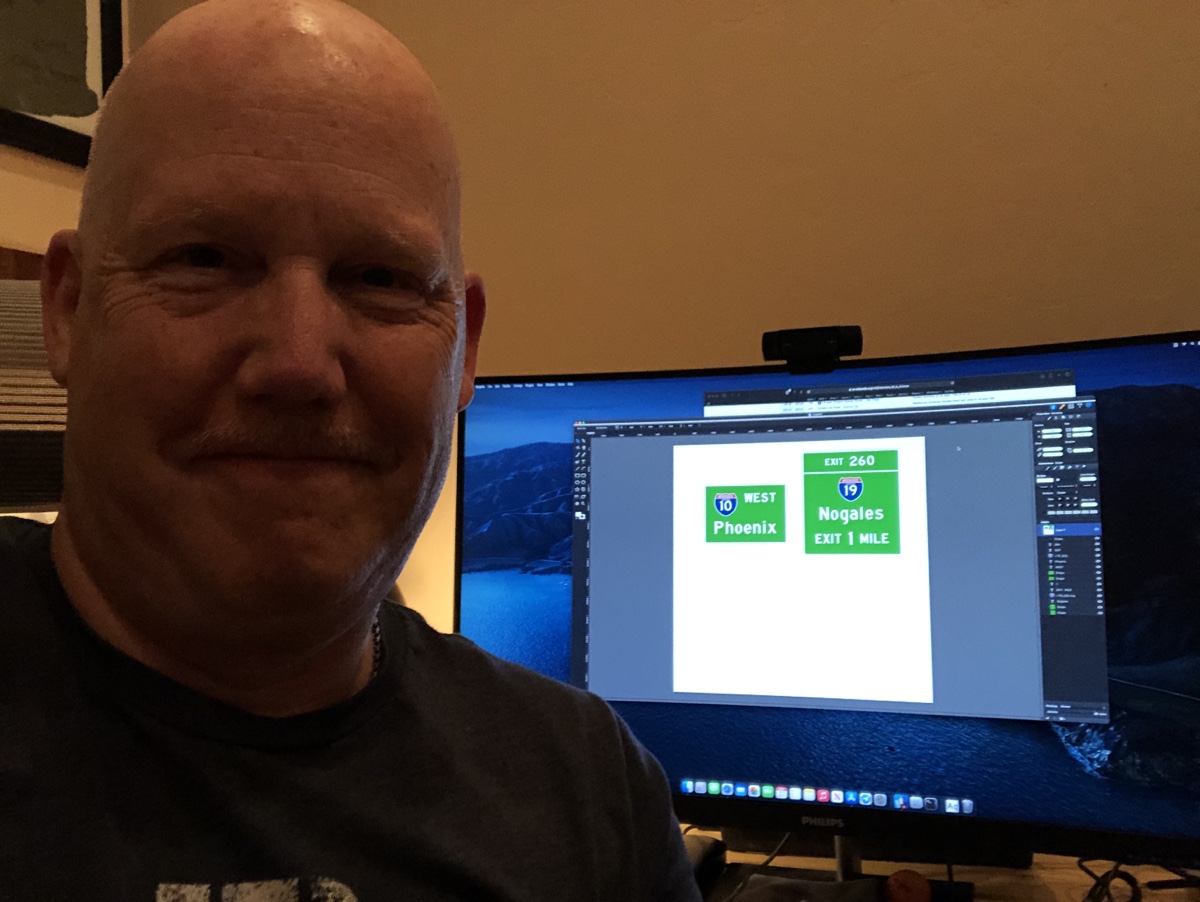 It’s a two selfie day! 15 years or so ago I went back to school to become a Civil Engineer, with a focus on traffic management. That dream didn’t come to fruition in the way of a career, but from time to time I dabble with designs based on what I learned in college.

Sometimes a dork just wants to have fun.

I don’t know if it can be attributed to middle age or if it’s a result of pandemic and the general chaos of society, but I have really lost track of time. Moving from the Midwest to the Desert Southwest probably contributed to this as well. When I was in North Carolina last week I was surprised to see some maple trees starting to change their leaves; in my mind it’s somewhere between January 2020 and May 2021 and I’ve found it very hard to discern the current season living here in the desert.

This morning I was in the mood to throw on a t-shirt and a pair of camo shorts for work. Even though I’ve worked from home for over a decade, I still like to put on fairly decent clothes when in “work mode”. Today’s agenda involves writing a bunch of code and doing a few end of the week odds and ends. In a swing of incredible events, my calendar today was clear of calls. Hence, an Atari t-shirt and camo shorts. Don’t tell anyone, but I’m also in my bare feet while working today.

My work week flew by but I’m still ready for the weekend. I need to relax from this jumbled up timeline.

I will always consider being a teenager in the 1980s as one of the greatest gifts to my life. This song resonates with me in a way few songs do, and I’ve always loved the simplicity of the music video. Many bad things happened in the 1980s, yes, but so many good things happened as well.

I really miss music like this. Here’s Joe Jackson with “Steppin’ Out”.

Apparently there’s a large community of folks that collect washers and dryers. While down a YouTube rabbit hole I saw a video of this washing machine in action, which is nearly identical to the washer we had starting in 1980 or 1981 after the old Westinghouse had flooded over one too many times.

As a kid I was always fascinated with washing machines, in the home and in laundromats, until the previously mentioned Westinghouse flooded the bathroom in our tiny mobile home. It broke its own schedule and structure, did something out of the ordinary, and then I was concerned it was going to do it again. This should be have a sign to my folks that not only was their son a strange one but probably had a different set of wiring and circuits in his head.

Even though the Westinghouse flooded my dad had my mother soldier on with it for a few more years, even making the move to the new house across the street. When it started flooding that laundry room and spitting grease on his work shirts, then we got the new General Electric washer like the one pictured above.

That washing machine lasted over 15 years before I replaced it with a pair of Hotpoints I had purchased and took the old washer and dryer to my townhouse about an hour away. This was my way of having dad pay for the washer and dryer I could no longer afford. I’m happy Dad was cooperative that way.

I don’t think anyone would expect a washer or dryer purchased today to last 10 years let alone over 15.

I like humor. I like funny people. I enjoy people that laugh and I enjoy making people laugh. I’m kind of good at it, but there’s a whole bunch of people funnier than me.

Growing up, I was a fan of humorist and newspaper columnist Erma Bombeck. I was a teenage young lad living in the Central New York countryside, but there I was laughing at “If Life Is A Bowl of Cherries, What Am I Doing In The Pits”? I giggled at Erma’s spin on life as a modern housewife and mother. Her take on life was funny, and more importantly, charming and I enjoyed her.

Fast forward twenty years to the 21st century and I discovered humorist and speaker Jeanne Robertson of Graham, North Carolina. I first heard a clip of one of her “speeches”, as she called them, on Sirius/XM radio. It was the channel next to Rawdog. She had a southern twang that was charming, she could tell a story like the best of them, and most importantly, the point of her speeches was to show people how to find the humor in any situation. Life gets better than way. Life is more manageable that way.

I’ve listened to Jeanne’s stories for the past 15 years.Back when they started featuring her on Sirius/XM the headlines read, “Grandma Goes Viral”. She’s a delight. Today I learned she passed (shaking my head in a gesture of respect) this weekend. She was 77 years old.

When work gets crazy, I have a small Post-It note near my computer or up by my webcam that simply says “Baton”. It’s a reminder to keep things light and to find the humor, even in the most stressful situations. It’s what Jeanne spoke about and keeping this in the back of my mind has helped me get through the workday on more than one occasion.

I’ll miss new stories from Jeanne. She had such a delightful way of conveying something to an audience. May she rest in peace.

For your enjoyment, here’s a clip from YouTube. It’s her Baton story. 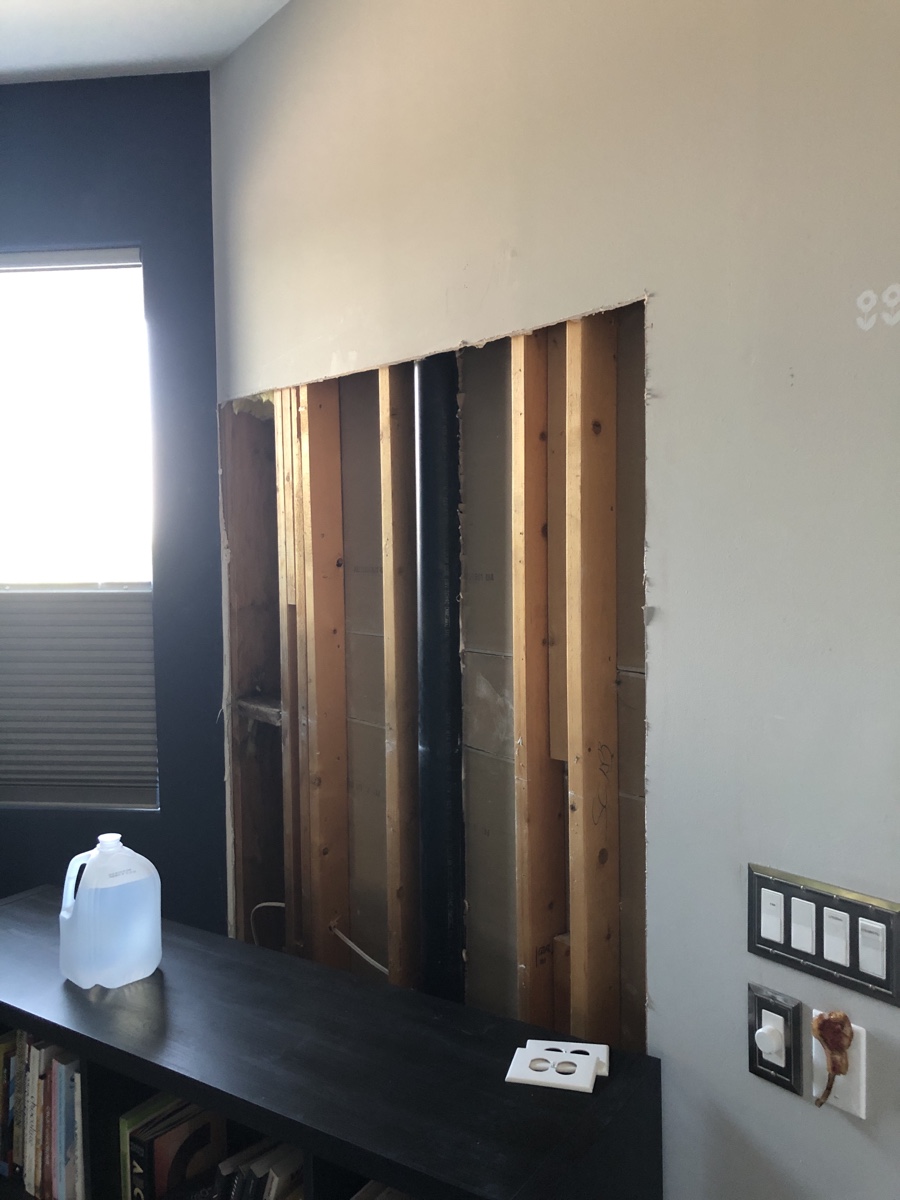 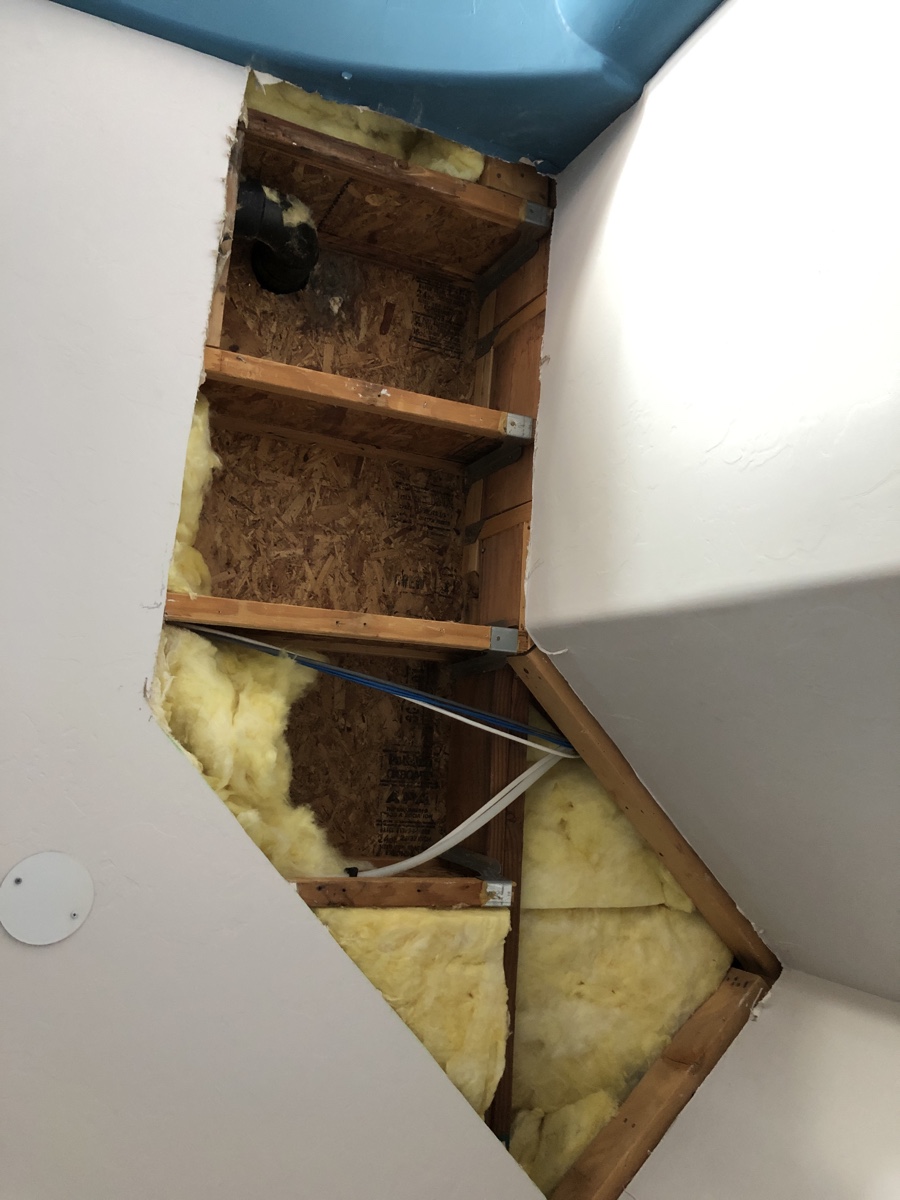 Our home is being slightly dismantled as water leak remediation is taking place. The company is doing a phenomenal job at keeping the messes contained and the water damage is not as bad as we feared. It’ll take a little while to get everything fixed but when it’s done it should be done for decades.

Unless Global Climate Change boosts up the monsoon season to even further unprecedented levels.

While the crew was working, they took out what we call the “$30,000 closet” the previous owner had installed to sell the house; she wanted to call our solarium a bedroom and put up some sheetrock and cheap shelves across the entryway to the room so it would be considered a bedroom. Then she bumped the selling price of the house up $30K. We didn’t pay it, and the closet looked fairly bad. We’ll take the cheap shop light out later this week. 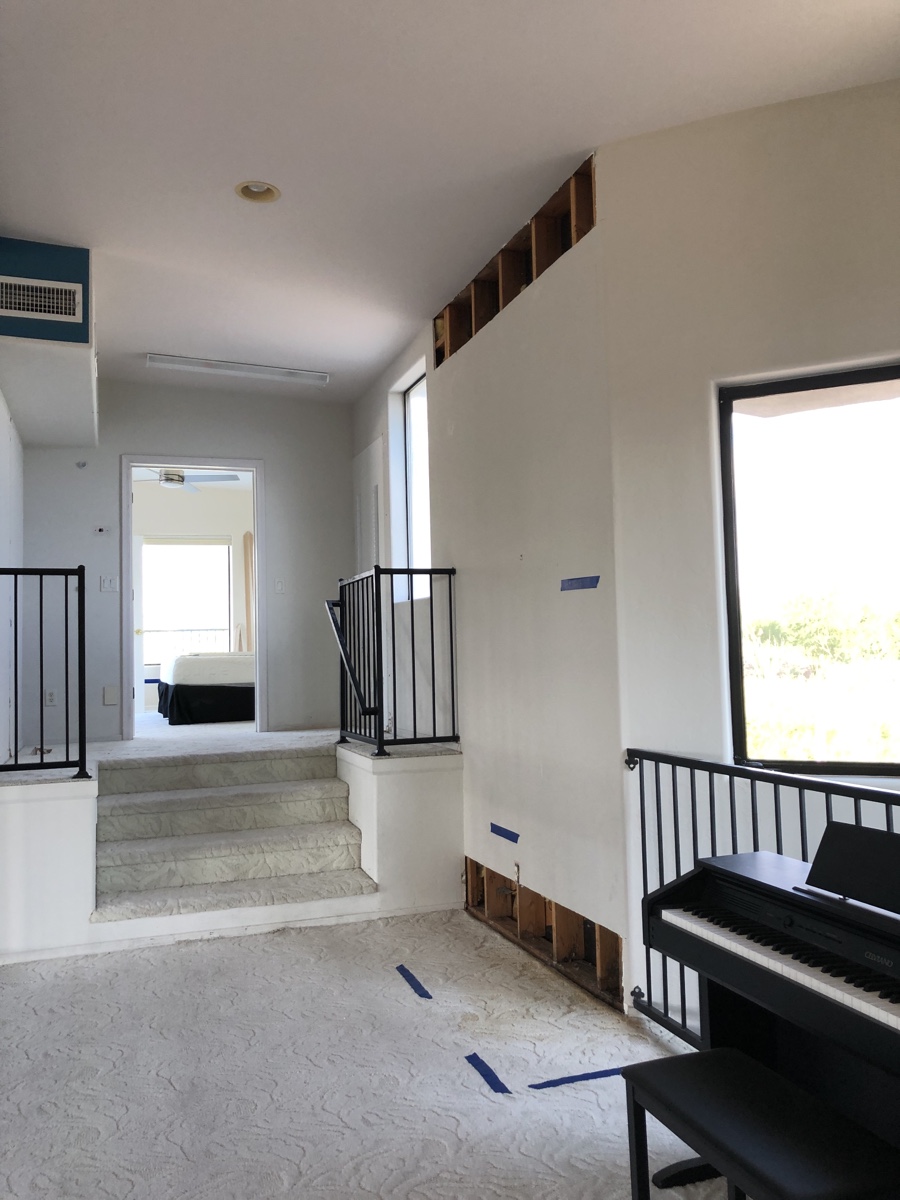