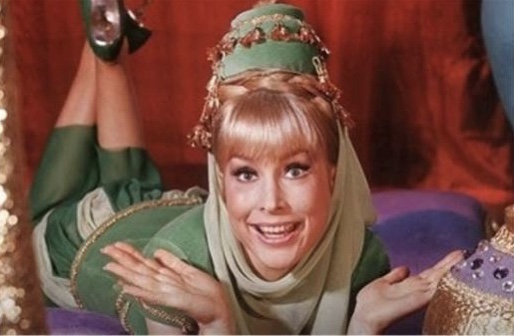 Shortly before his passing, when talking about his role as Major Roger Healey on “I Dream of Jeannie”, Bill Daily mentioned that Barbara Eden was one of the most even tempered person he had ever worked with, or for that matter, ever met. On the set of IDOJ she never got angry. Ever. Even when Larry Hagman was carrying on with his shenanigans all over the set (drinking champagne for breakfast, under the influence of drugs while filming, having hissy fits about the script, etc.), Barbara was the rock. Always steady. Always focused. Never angry.

I admire this about her.

I’ve been watching interviews featuring Barbara and she always has that pleasant demeanor and mischievous laugh she had way back in the 1960s. I had the opportunity to shake her hand once and she was very pleasant as she said hello, making her way down a line of fans during a “Nick At Night” roadshow in either 1989 or 1990.

I’m curious how she achieved this temperament. Was she just wired to be even keeled? Does she meditate? Do yoga? Chant? Float? What’s her secret?

I could use a few doses of this Edenism. I get way too passionately irritated about trivial things, especially things I can not change. “Set a good example for the world”, this is something I always say. I need to focus on that more.

But sometimes it can be so tiring.

Back in 2000, Sony/Columbia Pictures had the black and white episodes of both “Bewitched” and “I Dream of Jeannie” remastered and colorized. Like many colorization projects, some of the color selections for various shots are not accurate. On “Bewitched”, Endora’s robes are colored green and purple, which were absolutely accurate for the originally color later episodes of the series. But during the black and white years, Endora’s witchy robes were actually all shades of lavender.

Along similar lines, Barbara Eden’s Jeannie on “I Dream of Jeannie” actually wore a couple of different harem costumes that first year. In the colorized episodes they’re all shades of pink, but in actuality, one of the costumes was actually green, as shown in the picture above. There’s an early color episode from the second season where Jeannie wears the green outfit so we know it to be true, but the colorized first season episodes show that costume in pink. Next time you watched a colorized episode look for tassels hanging off her headpiece. The tassels were on the green costume, not the pink one.

She later wore the same costume when playing her dark-haired sister Jeannie.