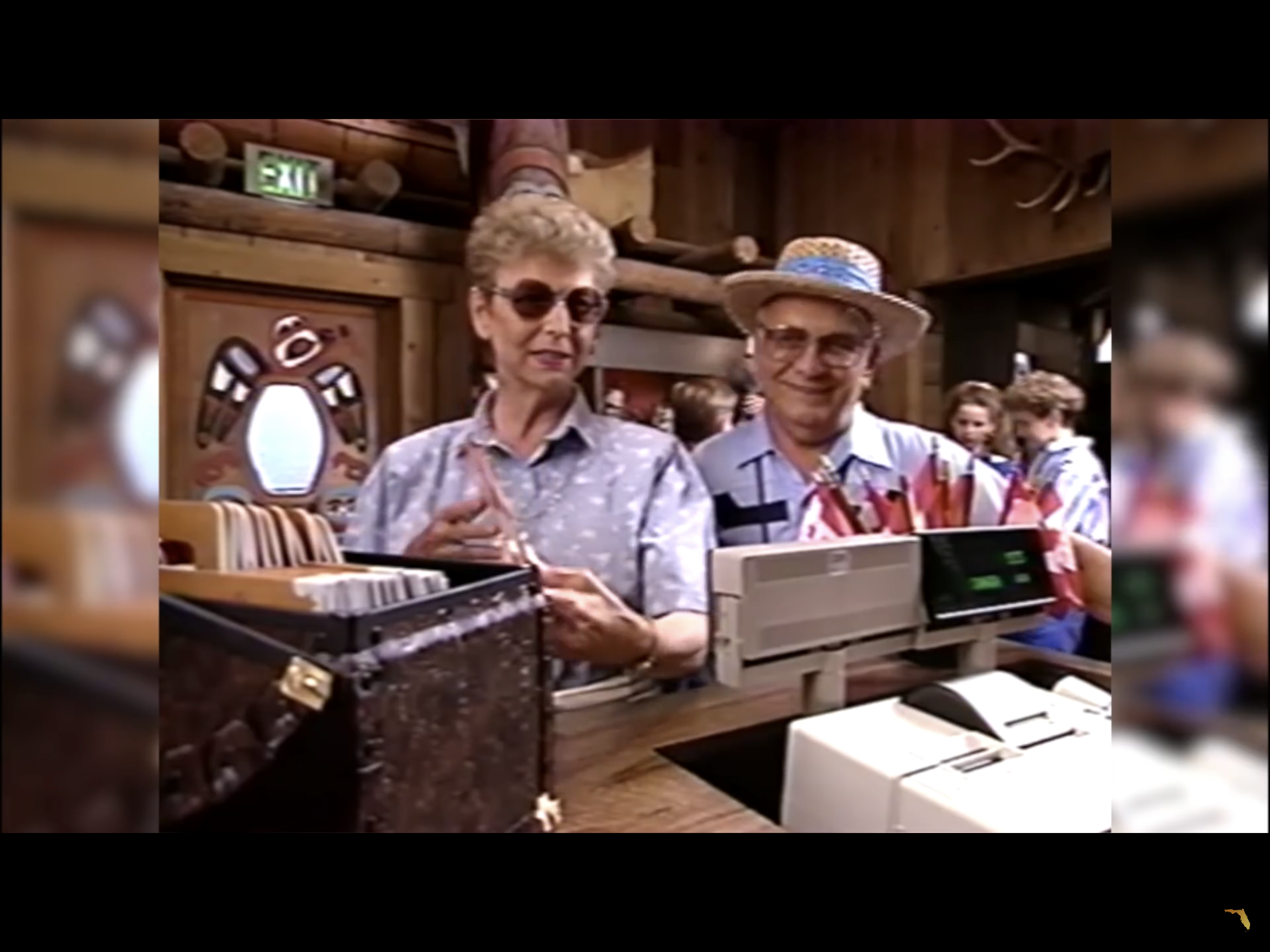 I don’t know the people in this photo. This is a screen cap from a 1991 video about EPCOT Center, the second theme part to open up at Walt Disney World in Florida.

The reason I snapped this photo is because of the IBM 4683 Point of Sale terminal in the foreground. When my husband and I visited Disney in 1997 I noticed these terminals, and they’re younger siblings the 4693, 4694, and 4695 scattered all over the parks. This was not surprising, you would find IBM cash registers like this anywhere back in the day.

The IBM 4683 was the first cash register made by IBM that used fairly standard PC components, though many of the peripherals were connected through proprietary connectors. When they first came out in the late 1980s they ran on an operating system called 4680 OS which was based on FlexDOS. Like MS-DOS (which folks were running on their PCs at the time), FlexDOS was a PC-based variant that included special multitasking powers. Typically, in modern installations, there’d be two IBM PCs running in the store somewhere powering the IBM 4683 terminals you’d see at customer checkout stands.

I had a brief stint tailoring point of sale software for the IBM 4683s running General Sales Application, which was the primary software package used in non-grocery environments back in the day. It’d probably be surprising to younger software developers, but the code we wrote was in BASIC. Yes, the same commands that you entered into your PC were used on these terminals.

Looking back it’s amazing what we could do with the IBM 4683 given that onboard memory was still measured in kilobytes and they didn’t have a hard drive. The later IBM 4684 was more robust and could operate as a stand alone register. That’s when the DOS variant of retail software was introduced and it was called “Retail Application/PC”. I did a little work on that as well.

When I worked at Hills Department Store over one holiday season the store was converted from older NCR 255s (installed in 1978) to the IBM 4680 GSA system. Our registers looked identical to the one pictured at EPCOT Center, but we still didn’t get scanning. We’d enter the Department, SKU, Quantity (if more than one), and price of each item. Contrary to modern belief, we did not key in the UPC numbers from the back of the item’s packaging. The registers didn’t know the price back then, but they did know if the price was too low or too high for that particular department. The limited memory onboard the registers didn’t have enough room to know the price of individual items but it did know the range of the entire department the item belonged to.

It’s been years since I’ve regaled a modern times cashier with this information when they roll their eyes because an item won’t scan.

It wasn’t too long ago that I saw an IBM 4683 still out in the wild. It might have been in Canada and it was pressed into service with newer equipment. It seemed to be keeping up with the Joneses.